7 Secret Courtyards in Odessa You Should Explore 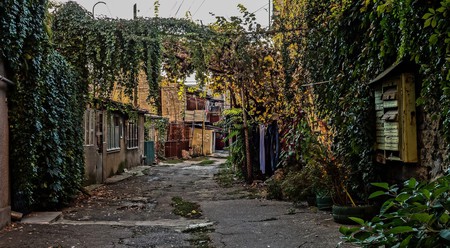 If you want to see what the real Odessa looks like, you should explore its secret courtyards. Unique architecture, historic buildings and a lot of greenery are waiting to be enjoyed and captured on Instagram. Therefore, look out for a lovely sunny day, put on some comfortable shoes and set off on a journey to the secret courtyards in our guide.

This artsy courtyard on residential Knyazheskaya Street is situated on the edge of the city centre. It is known for an impressive mural that does much to spiff up the old, ageing building. The mural raises the issue of diversity and unification of peoples, as the artist (Wanjah) believes that our souls are closer than our minds think. Thus, this courtyard is a must-visit when doing a walking tour of Odessa’s murals or if you’re simply in love with contemporary street art.

This courtyard located on Zhukovskoho Street is definitely the most inspiring one on this list. Totally covered in emerald green ivy leaves, it attracts Instagrammers from the whole city. Colourful clothing drying on clotheslines, open window blinds, winding wooden staircases and a fresh sea breeze give you the feeling of being in the sunny Italian city of Naples. Luckily, Odessa is cheaper and less crowded.

Historically, the locals of Odessa originate from different cultural and ethnic groups. Grecheskaya Street (Greek Street) is evidence of this, as its name is connected with the Greeks who lived here long ago. This is one of the oldest streets in the city, which was formed to be a trade centre. Not surprisingly, its courtyards are shabbier than many others. However, such an appearance has its warmth and shows what the real Odessa looks like.

The street named after Russian poet Alexander Pushkin is one of the most refined avenues in the central part of Odessa. It is where the Odessa Museum of Western and Eastern Art, the Odessa Pushkin Museum, one of Odessa’s best hotels named Bristol, as well as monumental St. Elijah’s Monastery are located. It is also worth paying attention to the courtyards of Pushkinskaya Street, particularly the one located in the 12th building. Its ochre-coloured walls are decorated with beautiful paintings and curly green plants.

Bernardazzi is an exquisite restaurant in the heart of Odessa. It occupies a unique historical building that is more than 100 years old. The venue is principally known for its secret summer patio, hidden from the city noise and the crowds. The splendid courtyard has an extraordinary atmosphere, with cooling shade, live music, delicious food and drinks, and, of course, excellent service.

Nezhinskaya Street in Odessa hosts a number of charming courtyards amid the concrete jungle. Tall buildings with wooden windows resemble the shots from old Soviet films. As the street is more than 200 years old, many of the buildings are architectural monuments of local or national significance. For example, the building at Nezhinskaya, 58, was built in the late 19th century. Experienced tourists know that you should marvel at such sights from the roof on the building. So, head to the top of the Mama Hostel and get a different vantage point over the typical Odessa courtyard.

It is important to say that Uspenskaya Street has its special charm. Before the 19th century, various educational establishments, small factories and workshops were located here; at the beginning of the 1900s, the street became populated with majestic mansions that, fortunately, have preserved their luxurious interiors, stucco mouldings and frescoes to this day. Therefore, not only are the courtyards on the street notable but so are the entrances to the buildings with tunnels, sculptures and fascinating exterior decorative elements.