EUROPE
/
UKRAINE
/
LVIV
/
Things to Do

7 Secret Courtyards in Lviv You Should Explore 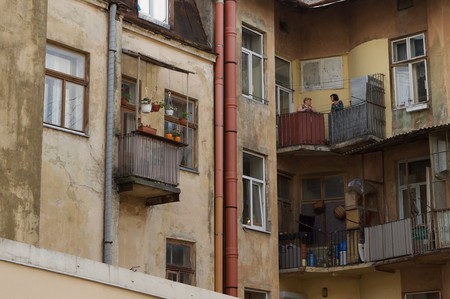 Experienced travellers know that nothing conveys the atmosphere of a city better than a charming courtyard. These places in Lviv are picture-perfect locations filled with local colour, the aroma of Ukrainian dishes and the lively sound of locals engaged in impassioned discussions. These spots also often hold niche cafés and shops and even contemporary art galleries, all just waiting to be discovered – here are the courtyards you should include in your Lviv itinerary.

One of the cosiest and most beautiful courtyards is the Italian Courtyard. Located in the very heart of Lviv, it can be found inside Korniakt Palace, a true gem of Renaissance architecture. Beautiful façades and windows perfectly convey the ambience of the charming city. The courtyard consists of narrow balconies, where photoshoots often take place. In the warm season, it becomes even more romantic: you can listen to live music, sit in the café, savour your favourite drink and enjoy traditional Italian dishes. The courtyard has proper acoustics, so it is considered an ideal place for concerts and festivals.

In the courtyards of an apartment building, not far from the centre of Lviv, you can visit an unusual open-air museum. There are no ancient Greek statues or world-famous masterpieces. The objects on display are instead teddy bears, dolls, cars, bicycles, plastic animal figurines, books and much more. The history of the museum began when a resident of the house found two lost toys and left them in the middle of the courtyard. Soon after, residents of the neighbouring buildings loved the idea and decided to repeat it. Thus, an impressive and surprising collection appeared.

The Armenian quarter is one of the most beautiful areas in Lviv. It has an amazing complex of edifices, including a church, numerous sculptures, cobbled streets, a bell tower, an archbishops palace and a nunnery. The cathedral, built in the 14th century, is included in the UNESCO World Heritage List. The courtyard, which used to be a cemetery, was designed just one century later. However, some of the tombs can be found today. They were preserved in the form of stone steles with inscriptions in different languages.

The First Lviv Grill Restaurant of Meat and Justice

Beyond the walls of the popular Lviv attraction — the medieval Bernardine monastery — you can pop in the First Lviv Grill Restaurant of Meat and Justice. This place can be found by scent, since the meat dishes of Galician and traditional Ukrainian cuisine are cooked here on an open fire. Inside the restaurant, you can see some unusual interior elements like a huge cage, cold steel, chains and other tools of torture. Meanwhile, the open-air summer terrace is surrounded by the ancient bastion and has been fashioned into a cosy courtyard.

Another must-visit courtyard is Something Interesting Art Gallery, situated in Lviv’s central square. This space was founded in September 2011, and since then it has been the only open-air gallery in the city. Young artists and photographers exhibit their works, hold performances, workshops and concerts here. Moreover, the courtyard has a shop with local handmade goods, where everyone will definitely find something interesting and useful. If you don’t want to spend a lot of money, you can simply have a cup of fragrant coffee in the gallery café.

The courtyard of the building on Market Square, 10 is actually the premises of the Lviv Coffee Mining Manufacture. A transparent ceiling provides a feeling of being in the open air, with the added benefit of always staying warm and dry on the patio. Here, you can have a cup of coffee, prepared in a huge variety of ways, as well as listen to live performances by musicians that take place almost every night. Also, the courtyard is a venue for literary readings, lectures and other artistic events. Lviv Coffee Mining Manufacture is also known as Lviv’s best coffee shop, which serves amazing coffee and claims to extract it from the ground like a regular useful mineral.

Andreolli Passage is the longest passage in Lviv. It was built in the second half of the 18th century in the Empire style. Therefore, it is an attractive spot for architecture lovers, and the contemporary passage became a noted spot when Swiss confectioner Dominick Andreolli opened a pastry shop here in 1803. It was such a fashionable and successful place that the whole passage was named after the chef. Later, locals noticed the positive tendency and transformed the courtyard in a bazaar. Nowadays, Andreolli Passage remains a trade point in Lviv with tiny souvenir shops and lovely cafés.