7 Contemporary Ukrainian Films You Can Watch in English 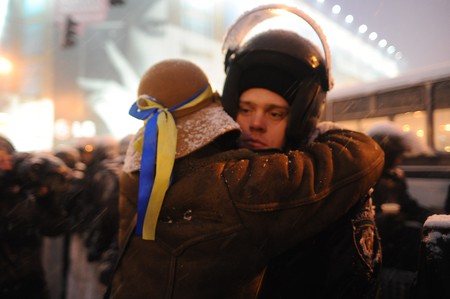 If a decade ago Ukrainian cinema could have been described as amateur, nowadays the situation has drastically changed. Local filmmakers boldly experiment and share, while audiences are receptive to the full gamut of options, from art house flicks to the prototypes of Western blockbusters. This means that recently there are a lot of worthy Ukrainian films piled up – here are our picks of the latest ones to check out.

In 2014, while everyone in Ukraine was engaged in the fight for independence and dignity (the Revolution of Dignity), Sergei Loznitsa did not hesitate. The Ukrainian film director was the first to present a motion picture on the ongoing events for the broader international public. The film had its world premiere at the 67th Cannes Film Festival in May 2014 and later participated in another 50 festivals around the globe. The key feature of the film is its unbiased chronology of the events and heartfelt stories of the Ukrainian people during this historic moment.

The Ukrainian film The Guide, or Povodyr in Ukrainian, has earned not only local but global attention. This dramatic feature film, shot by Oles Sanin, tells the story of the attempts of the little hero to survive in difficult conditions in a foreign country in 1930. Not only will you be surprised by the talented performances of the Ukrainian actors, but also with the captivating plot and beautiful cinematography. Besides, it is the only Ukrainian film that has been nominated for an Oscar for Best Film in a Foreign Language.

This fantastic film is based on the story of prominent writer Nikolai Gogol, describing the beginning of the 18th century. The director Oleg Stepchenko worked on the film adaptation for almost ten years. It took six months to design the scenery of the village where the story takes place. Even if the plot of the film differs from the original narrative, it is a true pleasure to watch this modern horror movie. Fans of the creativity of Nikolai Gogol will be delighted by the cunning turn of events.

The Battle for Sevastopol is a historical drama based on real events that occurred between 1937 and 1957. It is a collaborative effort between Ukraine and Russia to tell the story about the female sniper Lyudmila Pavlichenko, who shot 309 Nazi soldiers during the Great Patriotic War (the Russian designation for WWII). It is the first time that the life of the heroine has been told in such detail. The film became one of the top 100 most viewed movies on Amazon in January 2017.

This film is based on Ernest Hemingway’s novel, The Garden of Eden. According to the plot, a young American couple leaves for the Greek island of Lesbos to spend their honeymoon. However, they unexpectedly end up in a love triangle, one that will change their relationship once and for all. The film was originally shot in English, which was a real challenge for the Ukrainian actors. But, if you prefer to watch sensual and audacious movies, Sappho will definitely become one of your favorites.

The full name of the film is Winter on Fire: Ukraine’s Fight For Freedom. It is among those few movies that a foreign viewer can watch in English. The chronicle shows the three-month period during the winter of 2013-2014, describing the events of the revolution in Ukraine that was supported by millions of people. It shows the struggle of local protesters, who were courageous, despite the despair and bloodshed. The film had its premiere at the 72nd Venice International Film Festival, won the audience award at the Toronto International Film Festival, and was nominated for an Oscar for Best Documentary Feature in 2016.

Like most Ukrainian films, Firecrosser glorifies the heroic fate of the front-line pilot and German prisoner Ivan Datsenko. The actions begin in the mid-1940s when the main character miraculously escapes from a concentration camp. He faces persecution, difficult trials and run-ins, but finally reaches America and becomes the leader of an Indian tribe. This is an incredibly exciting example of the contemporary Ukrainian cinema. In addition, in the background, you will recognize the great sound of the up-and-coming band DakhaBrakha.