10 Up-and-Coming Ukrainian Musicians You Should Know 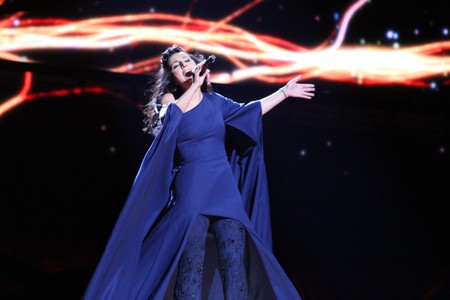 Ukrainian musicians who adeptly combine popular music with ethnic tunes are well-known abroad. They showcase that local bands do not simply play regular pop or rock, but create a truly unique sound. From the electronic beats of Onuka to rock songs of The Hardkiss, here’s 10 up-and-comers.

The debut of this band’s album was released in 2014 and became a real breakthrough. Songs of Onuka (in translation from Ukrainian – granddaughter) are filled with traditional Ukrainian sound motifs, which are performed on the flute, bandura and trembita (traditional Ukrainian music instruments) and perfectly combined with electronic music. They have already performed at the festivals, Sziget in Hungary and Eurosonic in the Netherlands. But the greatest success among foreign audiences was given to the musicians after their performance at Eurovision 2017.

The Hardkiss was created in 2011 and since that time they have been a real sensation on the Ukrainian scene. They are welcomed to the most popular Ukrainian festivals such as Leopolis Jazz Fest and Atlas, performing on the same stage as Prodigy, Deftones, Skillet and Hurts. In 2012, they were nominated for the MTV Europe Music Award and many times have won the national award YUNA of the best musician.

PianoBoy is a solo project from Ukrainian musician Dmytro Shurov, who performs in Ukrainian, Russian and English languages. The songs of PianoBoy (Pianoбой in Ukrainian) are touching and, instrumental. He is the leader of Ukrainian intellectual pop music, and also a composer of numerous soundtracks for advertisements and movies. In 2017 he became a new judge on the Ukrainian X-Factor.

Okean Elzy is the most popular and successful Ukrainian rock band at home and abroad. Their records are always resonant and become a significant event; their concerts are attended by tens of thousands, as the main and only condition of the performance is a live sound. The band has conquered their fans since the 1990s and, probably, is not going to stop. For Ukrainians, Okean Elzy are national favourites and the greatest musicians ever.

The singer Jamala (Susana Jamaladinova) occupied the top Ukrainian charts after participating in the international song contest New Wave in Jūrmala, Latvia in 2009. Since that time she has always been on the stage: either taking part in numerous music festivals and competitions, or giving concerts and experimenting with music and sound. One such case has brought her fame and world recognition, after becoming a winner of Eurovision 2016 with her song called 1944.

Brunettes Shoot Blondes is one of the most stylish, solid and high-quality indie bands in Ukraine. Surprisingly, these musicians first became known in Europe, and then at home. With the song Knock Knock, they have gained nine million views on YouTube, became finalists of the Berlin Music Video Awards and have been featured by Rolling Stone, Billboard, Mashable and many leading media. Later, they released their first album Bittersweet and the song of the same name, created in partnership with the German automobile company Opel.

Monatik is considered to be the most striking young musician in Ukraine. There’s no child or adult, who does not know his songs off by heart. It was he who opened the first semi-final of the Eurovision Song Contest 2017, with his song Spinning. Monatik is not only a singer but also a dancer and composer, who writes songs for other popular Ukrainian and Russian singers.

DakhaBrakha has long been well-known to folk motives, who play in their own genre of music called ethno-chaos. The band consists of four ladies, who perform Ukrainian folk songs in an authentic manner, using a wide range of instruments from different parts of the world. In addition, the composition Sho z-pod duba became the soundtrack to the third season of the Fargo series, produced by the legendary Coen brothers.

These Ukrainian musicians are incredibly popular in Ukraine and other former Soviet countries. The evidence to this can be found in the more than 180 million views of their video on YouTube. Sounds impressive, right? This band has their own extraordinary style, which young people like so much – unique outfits, up-to-date beats and easily memorable text of songs. Extra attention is granted to Vremya i Steklo (Time and Glass form Ukrainian, what is a play on words), as their frontwoman is also a local It-girl and a Ukrainian spokesperson for Maybelline cosmetics.