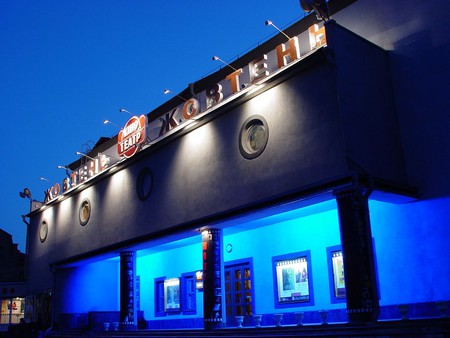 Ukrainians are among those nations who enjoy watching old Soviet flicks, which a long time ago became everyone’s favourite. Check out our guide to those films every Ukrainian should really know about.

In Ukraine, everyone knows the story when smuggled diamonds were rolled up into the gypsum and mistakenly placed on the broken hand of Semyon Semyonitch – the main character of the film. The crazy adventures and exciting song make any audience cry with laughter. The comedy came out in 1969 and immediately became a favourite film for many. The Diamond Arm is in the top five films in the history of Soviet cinema, as during the first year, almost 77 million people watched it.

The Battle for Sevastopol or Nezlamna (enduring in translation from Ukrainian) is the true story of Lyudmila Pavlichenko – the legendary sniper. The film, which was shot over almost two years in cities such as Sevastopol, Kiev, Kamianets-Podilskyi and Odessa, was long awaited. And it was not in vain as the film captured both unbelievable historical and biographical events. In the story, the snapshots from the front line since 1941 are interwoven with episodes telling how Lyudmila went with the USSR delegation to the US.

The Irony of Fate, or Enjoy Your Bath

A beautiful love story that began with a scandal, is a symbol of the New Year. There is no person in Ukraine who would not have watched the film called The Irony of Fate, or Enjoy Your Bath.

The passion for chic and gorgeous outfits, according to the plot of the film Chasing Two Hares, prompted Golokhvastov (the protagonist) to favourably marry a simple girl and, thus, save his business. He made such a decision as her parents promised a great dowry. Golokhvastov instantly struck the future bride with his manners and intelligence, but in reality, he did not represent anything but a liar and a bankrupt.

Historical drama Povodyr or The Guide tells about the Soviet repressions that kobzars – Ukrainian bards, faced in the 1930s. A young guy, the son of a deceased foreigner, trying to survive, becomes a guide during the war. This exceptional story, filmed by Ukrainian director Oles Sanin, was nominated for an Oscar in 2015. Additionally, Ukrainian singer Jamala, the winner of the Eurovision Song Contest in 2016, debuted as an actress.

Ivan Vasilievich: Back to the Future

Engineer-inventor Timofeev constructed a time machine that connected his apartment with the distant 16th-century, to be more precise – with the chambers of the emperor Ivan the Terrible. The title of the film – Ivan Vasilievich: Back to the Future, accurately reflects its essence, as from now on, a simple pensioner needs to behave like a Tsar of All the Russia’s.

Servant of the People

The slogan of the film is “from love to impeachment”, as the plot describes the situation in the contemporary government of Ukraine. The newly-elected president tries to stabilize the economic and political situation in the country. He dissolves Verkhovna Rada (Parliament), conducts positive reforms and lives the life of a common Ukrainian. A number of satirical jokes in the film are endless and because of that, Servant of the People has quickly become people’s favourite cinema.

Yet another classic of the Soviet cinema, this is one of the most watched films in Ukraine. The comedy of the great director Leonid Gaidai, like most of his films, captivates the viewers from the first minute. When a young man comes to the Caucasus to collect samples of local folklore, he gets a unique opportunity to partake in the ancient tradition of kidnapping the bride. But as it turns out later, it was not a ritual at all, but a real theft.

It is a fabled film of Sergei Parajanov (Soviet director), screening the story of the same name by Ukrainian writer Mikhail Kotsyubinsky. Children watch this movie within the school program, fans of the old cinema enjoy the unique arty image. In addition, the Shadows of Forgotten Ancestors was shot in one of the most picturesque and mountainous villages of the Carpathians – Dzembronya.

Only Old Men Are Going to Battle

The film shows the harsh military life of the Guards aviation regiment during the war and the liberation of Ukraine. Pilots who have little experience, are forced to rise to the sky when they hear the command “Only old men are going to battle” and show what they are capable of. They are led by a commander, who, until the last, fights with them and watches their backs. Only Old Men Are Going to Battle is an insanely touching movie.