What's On In Istanbul In October 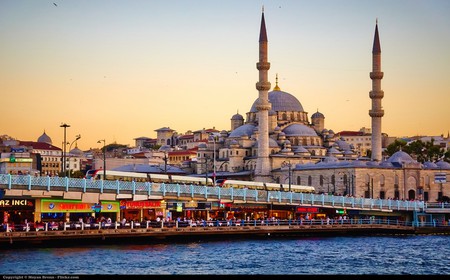 With the end of summer, Istanbul is once again alive with lots of events, especially jazz concerts, due to the Akbank Jazz Festival throughout the month in various venues. From cooking classes to concerts (and everything in between) we picked out October’s highlights.

Hear some of Turkey’s best rock bands in this festival that’s bound to get a bit rowdy. On the stage will be Duman, Ceylan Ertem, Pinhani, Adamlar, and Sahte Rakı. If you’ve never listened to Turkish rock before this festival is a good start.

Born in Lebanon, Turkish singer Jehan Barbur is one of the divas of Turkish pop and jazz who has won fame with her own songs and lyrics, releasing four albums since 2009. Barbur’s soft voice will get you in a romantic mood, so maybe it would be best to bring a date to this concert.

Get to know Istanbul’s designers at this garden sale, where everything from textiles to jewelry and vintage objects to industrial designs will be on sale. Street musicians will also be in attendance to really heighten the mood as well as swing jazz sessions.

With a different theme every year, this year’s Crime & Punishment Film Festival will focus on ‘hardship’, with 33 different films that explore this concept. Among the films are Food & Shelter by Juan Miguel del Castillo, Anna’s Life by Nino Basilia, and Harmonium by Koji Fukada (among many others).

When Halil Sezai’s song ‘İsyan’ was released in 2011, it became an anthem for all heartbreak. Sezai’s deep voice and poignant lyrics have made him one of Turkey’s most soulful singers. Join him for an intimate evening of music.

One of the world’s most important choreographers, Fredrik Rydman,takes on the Tchaikovsky classic Swan Lake, updating it with a modern aesthetic (including modern dance and contemporary pop and rock hits).

The Whirling Dervishes have become synonymous with Istanbul’s cultural heritage. Performed by followers of Mevlana Celaleddin Rumi, the dervishes perform this dance as a form of dhikr (remembrance of God). You’ll be mesmerized by the visual, heightened by 360-degree video mapping technology.

Part of the ‘Müzik Boğaz’dan Gelir’ (Music Comes from the Bosphorus) series, join Turkish singer/songwriter Ediz Hafızoğlu and her band on a boat cruising over the Bosphorus for an evening of jazz music on the water. The boat will take off from two different piers.

Meze are small appetizer-like dishes that have become a cornerstone of the Turkish kitchen (best served with glasses of rakı). Learn how to make various meze varieties at Istanbul’s premier cooking school MSA, including eggplant and strainer yogurt dip and a volcano cake with tahini (to name a few).

Having grown up with a family of musicians, it was no surprise that Turkish multi-instrumentalist and singer Fatih Erkoç became a very important name in the music scene. With 14 albums to his name, Erkoç takes the stage for the Akbank Jazz Festival to really show off his vocal talents.

Italian classical and jazz-pianist Stefano Battaglia takes the stage for the Akbank Jazz Festival. Having won the best new pianist of the year award at the J.S. Bach Festival in Düsseldof in 1986, Battaglia has played extensively on the international circuit and has recorded more than 60 CDs.

Known for their mesmerizing show that combines athleticism, theatre, and comedy, the Harlem Globetrotters are promising a fun-filled, family-friendly show in Istanbul. Having played more than 26,000 exhibition games in 122 countries since 1926, you know you’re going to be seeing some epic action on the court.

French pop soul-singer Imany takes on the Istanbul stage for the Akbank Jazz Festival, her sound influenced by her idols Billy Holiday, Nina Simone, and Tracy Chapman. Having begun her career as a model, she returned to her native France and released her first album in 2011.

Nardis Jazz Club is one of Istanbul’s best jazz bars, so this intimate concert with New-York-born saxophone player Ray Blue and his talented band should really be a treat for all jazz lovers. A master of improvisation, grab a drink from the bar and be hypnotized by Blue’s skills.

Nigerian drummer, composer, and songwriter Tony Allen lives and works in Paris and will take on Istanbul for the Akbank Jazz Festival. A master drummer of afrobeat, he is accepted as one of the greatest drummers who has ever lived.

Learn how to cook favorites from the Lebanese kitchen with the talented chefs of the Chef’s Table cooking school. On the menu is a classic tabbuleh salad, hummus with pickles, and a falafel with tahini sauce (to name a few).

Love artisanal bread? Then this workshop is just for you. Learn about the delicate art of making perfect bread with the professionals including sourdough, foccachio, brioche, and much more.

As part of the Akbank Jazz Festival, the Kadıköy, Moda, and Yeldeğirmeni neighborhoods will turn into one giant jazz concert with 11 venues featuring more than 20 performances from 10:30pm onward. Among the many artists will be Hey Douglas, Lara Di Lara, Nilüfer Verdi Trio feat. İpek Göztepe & Can Bora Genç, Önder Focan & Şallıel Bros. “Funkbook” (to name a few).

One of Istanbul’s best concert venues, Salon IKSV is back with English musicians Mammal Hands, a fantastic blend of jazz, folk, and electronica. Join Nick Smart (piano), Jesse Barrett (drums and table), and Jordan Smart (saxophones) for an evening of very unique music.

Hear the music of some of Turkey’s favorite bands at this open-air festival aimed at celebrating everything young and fun. On the stage will be Gripin, Model, Yüksek Sadakat, Adamlar, Gürcan Ersoy, and Hayat Meyal.