What's On In Istanbul In December 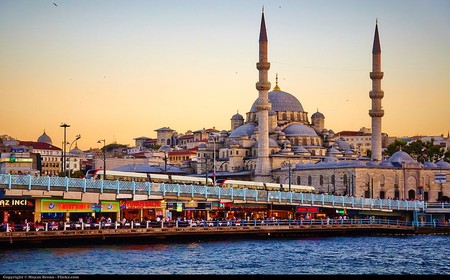 With New Year’s Eve just around the corner, December in Istanbul is always a bit festive because of the big celebrations ahead. There are a lot of events revolving around great music this month, so make sure to get your tickets early before they are gone.

MUSIC | Emiliana Torrini And The Colorists

Formed in 2013, this unusual musical group is known for their use of classical instruments along with a wide variety of self-created musical tools. The eight-piece orchestra will be joined by one of Iceland’s most important singers and songwriters, Emiliana Torrini, in this performance.

French-American jazz and blues singer and songwriter Madeleine Peyroux began singing at the age of 15 and touring Europe with a wandering band by the time she was 16. Since then, she has become a successful solo artist with eight albums to her name and is often compared to Billie Holiday.

A favorite in Istanbul (so tickets will sell out fast), Michelle Gurevich (aka Chinawoman) is a Canadian singer and songwriter whose musical style is influenced by her Russian heritage. Described as slowcore rock or lo-fi pop, Gurevich’s songs are heavy with emotional weight and always beautiful in their execution.

Swedish-Turkish musician, composer, cultural activist and entrepreneur İlhan Erşahin was raised in Stockholm and has been based in New York City since 1990. Most famous for his skills on the saxophone, which he taught himself to play in his teens, Erşahin brings together jazz and the modal textures of Turkish music in this project entitled ‘Wonderland.’

Founded in 2003 in Gothenburg, Sweden, El Perro del Mar (which translates to ‘the dog of the sea’) is led by its sole member Sarah Assbring who has amassed a loyal following with her unique version of indie pop. With six albums to her name, del Mar is an artist whose style is in constant flux depending on her inspirations.

English singer and songwriter Ed Harcourt is not only known as a successful solo artist with six studio albums and a 2001 Mercury Prize but also as a writer for other artists such as Sophie Ellis Baxtor and Paloma Faith. You’ll really fall for his style, influenced by Tom Waits, Nick Cave, and Jeff Buckley.

One of Turkey’s most important vocalists, Gaye Su Akyol arrived on the scene in 2014 with a self-written EP that successfully fused elements of Turkish music with pop, rock, and electronica. In this concert, she’ll be joined by Bubituzak, whose sounds pays respect to the sub-genres of rock music.

This acclaimed musical theater show pays homage to the particular Italian bel canto vocal style through the use of six different thematic areas. With 12 singers, seven musicians, and seven dancers, viewers will be transported from the Florence of Lorenzo de’ Medici and the Venice of Claudio Monteverdi to London with Freddie Mercury and Queen while passing through the magnificent composers of opera, the Austrian and French operettas, the Anglo-American musical, and up to pop and rock.

Masters of improvisation and unusual instruments – when Turkey’s favorite psychedelic band BaBa ZuLa gets on the stage, no one can predict what will happen (except that it will be a wild ride). Founded in 1996, the alternative music group plays with a wide array of musical influences and instruments (some self-built) for a sound that is thoroughly unique.

Rumi, the influential Islamic scholar, poet, theologian, and Sufi mystic, will be honored as part of the 743rd anniversary of Şeb-i Arûs (Rumi’s death). This year, the event will feature the music of the Sufi world, as Rumi’s teachings will be voiced by Okan Bayülgen. These 743 years of Anatolian history will be commemorated with Mevlana rituals and Sema (whirling).

Organized by Pera Film, this film marathon celebrates the 50th anniversary of the founding of the Turkish Cinematheque Society, which contributed to the establishment of a national cinema in Turkey. A selection of outstanding films from the 1920s to the 1970s will be on view from directors such as Sergei Eisenstein, Fritz Lang, Alain Resnais, Ingmar Bergman, Jean-Luc Godard, Luchino Visconti, Francesco Rosi, and Andrei Tarkovsky.

Börek is a Turkish pastry stuffed with various fillings, from cheese to minced meat. The art of making börek from scratch is quite the task with very delicious results, and Turkey’s premier cooking academy, MSA, will hold a workshop where the art of making the perfect börek is revealed. Börek with white cheese and parsley, kol börek with minced meat as well as potatoes, and the famous Laz böreği will all be on the menu.

Born in Paris to Vietnamese parents, Nguyen Le quickly turned to music, playing drums at the age of 15 and later taking up guitar and electronic bass. By 1983, he formed the band Ultramarine, a multi-ethnic project that was hailed as one of the best examples of World Music. In this concert, Le will be joined by Ngo Hong Quang, a musician known for his use of the magical Đàn Nhị, a bowed string instrument native to Vietnam.

Omar Souleyman began his career as a part-time wedding singer in his native village in the northeastern region of Syria. By 2011, he was the surprise headliner at Glastonbury, and in 2013, he performed at the Nobel Peace Price Concert in Oslo, Norway. His culturally diverse sound that borrows from the Kurdish, Ashuri, and Arabic musical traditions has made him a unique musical artist and a favorite in Turkey.

One of Turkey’s oldest guitar ensembles, İstanbul Gitar Ensemble is back for another excellent performance that spans different eras and composers. In this concert, Cem Küçümen, Şadi Ensari, and Erdem Sökmen will perform classics from the dance music genre.

One of Buena Vista Social Club’s most important second-generation vocalists, Luis Frank has made it a mission to bring Cuba’s musical legacy to the world. After having toured with big names such as Company Segundo, Frank began working with Juan de Marcos, founder of the Buena Vista Social Club and the Afro-Cuban All Stars. Frank will take the stage with piano virtuoso Lazara Cachao Lopez, who also happens to be the daughter of famed BVSC bass player Orlando ‘Cachaíto’ Lopez.

Followers of Mevlana Celaleddin Rumi, the Whirling Dervishes, who perform this dance as a form of dhikr (remembrance of God), have become synonymous with Istanbul’s cultural heritage. You’ll be mesmerized by the visuals heightened by 360-degree video mapping technology.

Party your way into 2017 with a DJ set that pays homage to awesome hits from artists such as The Cure, Madonna, A-Ha, Chic, Duran Duran, Snap, Cyndi Lauper, ABBA, Donna Summer, James Brown, The Smiths, Wham!, Frankie Goes To Hollywood, and Michael Jackson. Go back to the past before you enter the new year with this rampant party.

One of Turkey’s most important music groups, Mazhar-Fuat-Özkan (MFÖ) has been around since 1971 making pop and rock songs that are a part of every Turkish person’s life soundtrack. Enter 2017 in the middle of the Bosphorus on Suada Club with the music of this epic trio while you watch the fireworks.