What Could Istanbul's Basilica Cistern Be?

Ancient and beautiful, Istanbul is not a city you can come to grips with in a single day. But with the help of travel specialist Şerif Yenen and his series of quick-guide videos, you can start unraveling the many different dimensions of Turkey’s cultural capital city. To open his series, Yenen explains the unexpected beauty of Istanbul’s Basilica Cistern. 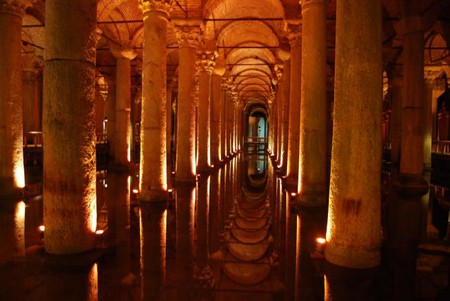 The word ‘basilica,’ in modern English, is used to express either a building with a central nave and aisles, or a large church with a curved end and two rows of columns inside.

The famous Basilica Cistern in Istanbul is neither one of these. It is simply an ancient water reservoir. It was the largest of almost two hundred Byzantine period cisterns that lie beneath the city of Istanbul, formerly known as Constantinople. It should have been named so because of the rows of columns inside. Columns and capitals of earlier pagan temples were recycled in its construction, providing a very decorative appearance. As such it is often called ‘saray,’ which means ‘palace’ in Turkish.

Throughout history, Istanbul has been one of the most frequently besieged cities in the world, and therefore it has needed a permanent supply of fresh water through the ages. Open-air reservoirs and many underground cisterns were built in Istanbul during the Byzantine period. Aqueducts carried water to these reservoirs from great distances.

The Basilica Cistern was dug and built sometime after AD 532 by Emperor Justinian I for the Byzantine Palace and its grounds. In total, there are 336 columns, arranged 12 by 28, most of which are topped with Corinthian or Doric capitals. Each column is about 9 m (30 ft) high. The cistern is 65 m (213 ft) wide and 138 m (453 ft) long. The walls are almost 5 m (16 ft) thick and made from baked clay bricks, covered inside with waterproof plaster. It is believed that the full capacity was approximately 100 thousand tons of water.

The carp in the water are decorative and an incidental protection against pollution. Some believe the Byzantines may have raised fish in the cistern for the same purpose.

The many vaults built into the cisterns made it possible to have terraces in hilly areas. Squares and parks were built on these terraces. Originally, there was a public commercial square on top of the Basilica Cistern, which was replaced by some Byzantine and Ottoman houses. It is said that people dug holes from their houses into the cloister vaults of the cistern to get water from the reservoir. Some hung their food for refrigeration.

Some of the cisterns in Istanbul were not part of the original plan, but as the need for water grew, space beneath parts of some buildings were converted into cisterns.

Turks have always preferred running water, so when the Byzantine Period had passed and the city was no longer under siege, Turks did not use the cisterns as they were intended. Most of them were converted into small bazaars or storehouses.