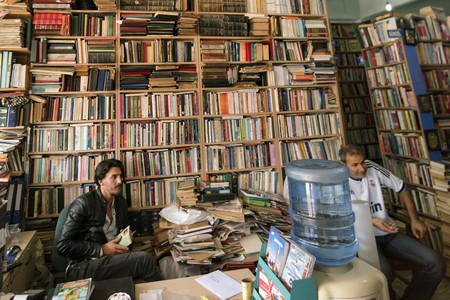 Turkish police raided the offices of Belge Publishing House last night, briefly detaining editor Mehmet Ali Varis and seizing 2,170 books. That the Turkish state has had, for some time now, a uniquely troubling liking for repression cannot, anymore, be a surprise to anyone. Its scale alone makes it difficult to ignore: more than 120,000 civil servants have been sacked, close to 100,000 detained, around 170 media organizations were shut down or remade into pro-government mouth-pieces, as well as more than 150 journalists arrested. And all of this alongside a civil war in the southeastern part of the country that has displaced more than 400,000 people.

The latest authoritarian escapade took place on Sunday night, when policemen stormed Belge Publishing’s offices in Istanbul and occupied it for close to three hours. They ended up confiscating thousands of books—including most, if not all, of the publisher’s back catalogue—and only released Mehmet Ali Varis after questioning. Their actions were motivated by the Belge’s alleged links to the far-left Revolutionary People’s Liberation Party/Front (DHKP-C).

The independent publisher was founded in 1977 by Ragıp and Ayşe Zarakolu and has had a history of pushing political books—cutting their reputation in the aftermath of the 1980 coup, when they published a series of 35 works written by political prisoners. They have since published books such as Stateless Kurds, Decisions Tougher than Death and—most recently—The unwritten memoirs of Recep Tayyip Erdoğan, a satire on the life of Turkey’s president.

Ragıp Zarakolu had also been detained between October 2011 and April 2012.