Topkapi Palace: The Seat Of The Ottoman Empire

Ancient, beautiful, and huge — Istanbul is not a city you can come to grips with in a single day. But with the help of travel specialist Şerif Yenen and his series of quick-guide videos, you can start unraveling the many different dimensions of Turkey’s cultural capital city. For the next installment in his series, Yenen describes the fascinating history and mesmerizing beauty of Istanbul’s Topkapi Palace.

The Topkapı Palace was the imperial residence of the Ottoman Sultan and home to his court and harem. It was also the center of the state administration. Construction on the palace started in 1459 and was completed in 1478, making it the Ottomans’ second palace in Istanbul.

The Topkapı housed each of the Ottoman sultans from Sultan Mehmed II to Sultan Abdülmecid, covering nearly four centuries and 25 sultans. As each succeeding sultan ascended to the throne, he added parts to the palace, indicating the different tastes and styles of architecture over four centuries. The changes were made for reasons of practicality, to commemorate victorious campaigns, or to repair damage caused by earthquakes and fire. In 1924, the palace was turned into a museum.

A kind of humble simplicity and practicality is found in the Ottoman palaces. The Topkapı was a city-palace with a population of approximately 4,000 people, covering an area of 70 hectares (173 acres). The First Courtyard, which was open to the public, was the service area of the palace consisting of a hospital, a bakery, an arsenal, the mint, storage places, and some dormitories. The Byzantine Church of Hagia Eirene was located here, too. It was utilized as an armory.

The Second Courtyard, also called Divan Meydanı, was the seat of the Divan (Imperial Council) and open to anyone who had business with the Divan. This was the administration center of the empire. In addition to the Divan, there were also the privy stables and kitchens. In the kitchens today, a collection of Chinese porcelain, which are accepted as the third most valuable in the world, are on display along with authentic kitchen utensils and both Turkish and Japanese porcelain. Dış Hazine-Treasury houses an exhibition of armory.

The Harem was the part of a Moslem house dedicated to the family and closed to the outside world. It was in these special quarters of the Ottoman palace that the dynasty lived. Non-Moslem concubines were sometimes accepted in the palace harem. Thus, they had a chance to become part of the dynasty as Sultans’ wives and even becoming Queen Mother. In most cases, however, they married Ottoman bureaucrats. 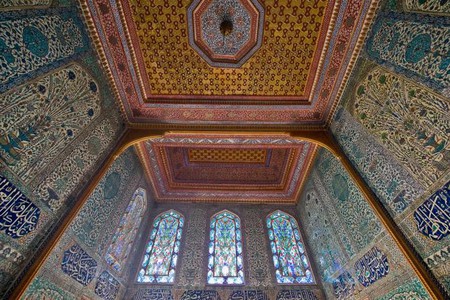 Topkapi | © Fred Bigio/Flickr
Give us feedback