Unusual Things To Do in Istanbul 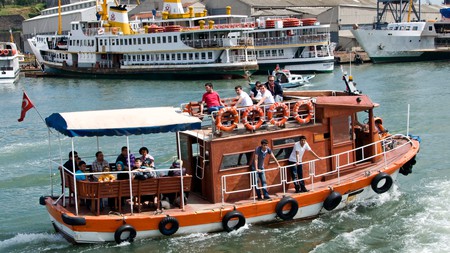 It’s hardly surprising that Istanbul, a city of some 15m inhabitants, straddling two continents and with a fascinating past stretching back into prehistory, should have more than its fair share of offbeat things to do.

Want to explore Istanbul’s Grand Bazaar? Book CTRIPS by Culture Trip’s 12-day small-group tour where you’ll get to haggle for souvenirs and sip Turkish tea in one of the largest covered markets in the world.

Visits to the iconic Hagia Sophia cathedral and the monumental Blue Mosque are obligatory, as is exploring the magnificent Topkapı Palace complex. But do make time between the big-hitters to revel in Istanbul’s more idiosyncratic offerings: pigeons tumbling by a Byzantine palace, dervishes whirling in the Orient Express station, dawn sculling on the Golden Horn and Trotsky’s old home on the picturesque Princes’ Islands. Terry Richardson, author of the Rough Guide to Istanbul, lists his favourite unusual things to do in the city.

Watch dervishes whirl in the terminal station of the Orient Express

Founded by the Mevlana (AKA Rumi) in the 13th century, the followers of the Mevlevi branch of Sufi Islam are better known in the West as whirling dervishes. Watching them spin in synchronised unison to focus more clearly on God is a mesmerising experience, especially with hypnotic traditional Sufi music playing in the background. The incongruous venue, the waiting room of the late 19th-century Sirkeci Station, once the terminus of the fabled Paris-Constantinople Orient Express, only adds to the quirky charm. 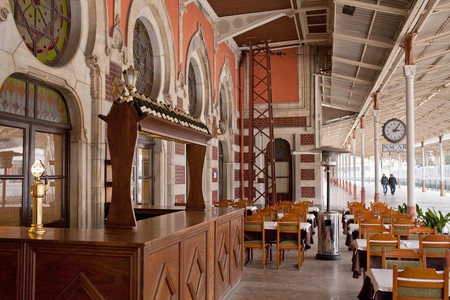 Row on the Golden Horn

Few visitors leave Istanbul without a ride across to Asia or up the continent-dividing Bosphorus Strait on one of the city’s iconic ferries, but only a handful get more intimate with the waters running through its historic heart. Sculling a lightweight rowboat along the calm waters of one of the world’s greatest natural harbours, and watching the domes and minarets of the city’s skyline emerge from darkness into the pink light of dawn is a magical experience. Go to Istanbul Tour Studio to find out how to do it. 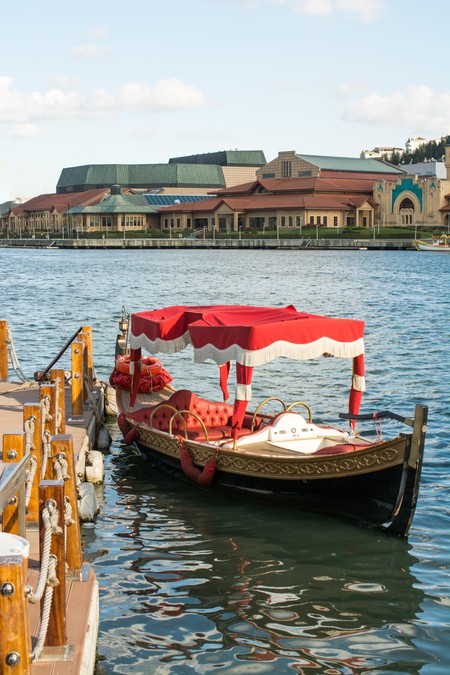 Of all Istanbul’s surviving Byzantine-era (330–1453AD) cisterns, the cavernous, atmospherically lit Basilica Cistern, in the heart of touristy Sultanahmet, is the most special. After visiting it, and for a different experience, head to the recently renovated Serefiye Cistern. This veritable forest of beautifully carved marble columns is exquisitely lit and free to enter. Even further off the beaten track, in the ultra-conservative district of Fatih, is the Sultan Sarnıçı. Its brick vaults, marble columns and intricately carved capitals come to life at weekends, when it hosts various events. Entry is also free, and just opposite is the massive Aspar Cistern, once a reservoir for the city but today a busy park. 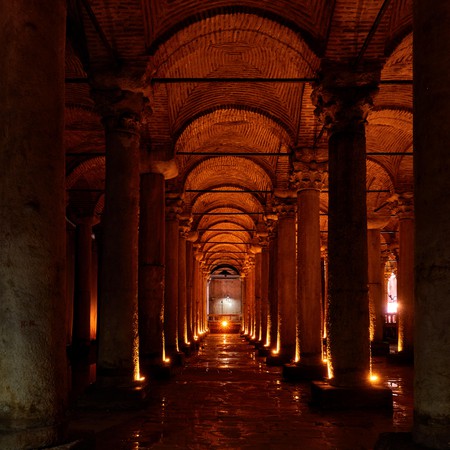 Sample a fresh-fish sandwich by the Galata Bridge

Spanning the Golden Horn and linking the tourist heartlands on the historic peninsula with the bustling entertainment districts of Karaköy and Beyoğlu, the Galata Bridge and its surroundings are so busy they form a microcosm of the city itself. Read Dutch writer Geert Mak’s The Bridge to find out all about the colourful characters to whom the bridge is home. No visit is complete without sampling a street-food fish sandwich, a charcoal-grilled fillet of mackerel slapped into a half loaf of fresh white spread and garnished with onion, tomato, rocket and sumac. They’re sold from boats or stalls on both the Eminönü and Karaköy sides of the bridge for around €2. 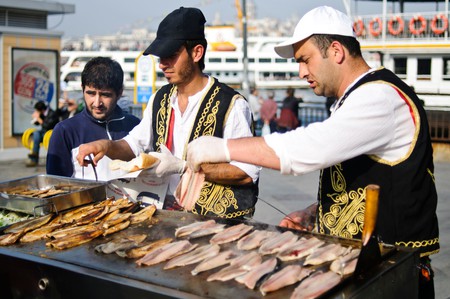 Pigeons, not walls, come tumbling down

We doubt there’s a pigeon market in the world that has a better backdrop than the one in Istanbul’s Fatih district, where pigeon fanciers congregate each Saturday on a dusty lot next to the 5th-century Walls of Theodosius, arguably the greatest and most successful city walls ever built, and the once-grandiose Byzantine Palace of Porphyrogenitus. Prospective customers inspect a bird that takes their fancy with great care – not surprisingly, for these are mainly working-class men and the birds sometimes fetch hundreds of dollars. If you’re lucky, you may get to see one do its stuff, which is not racing but mid-air tumbling and other aerial acrobatics accompanied by claps of the owner’s hands. 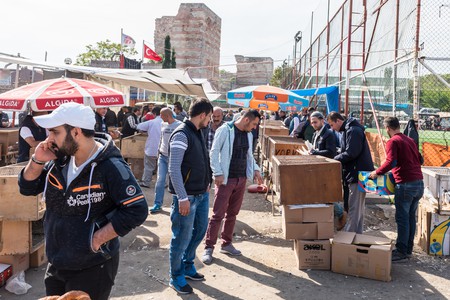 He’s run foul of the Turkish authorities for his outspoken views on Armenians and Kurds and faced death threats from ultra-nationalists for his views; in 2006, he won the Nobel Prize for Literature. What the mild-mannered Istanbulite intellectual Orhan Pamuk makes of all this is uncertain, but he certainly maintained his record for controversy when he opened the bizarre Museum of Innocence in the trendy Cukurcuma district of Beyoğlu in 2012. Based on objects that featured in his page-heavy Museum of Innocence novel, including hundreds of cigarette ends smoked by its star-crossed lovers, it’s a bold statement in a city that is far more conformist than might first appear. 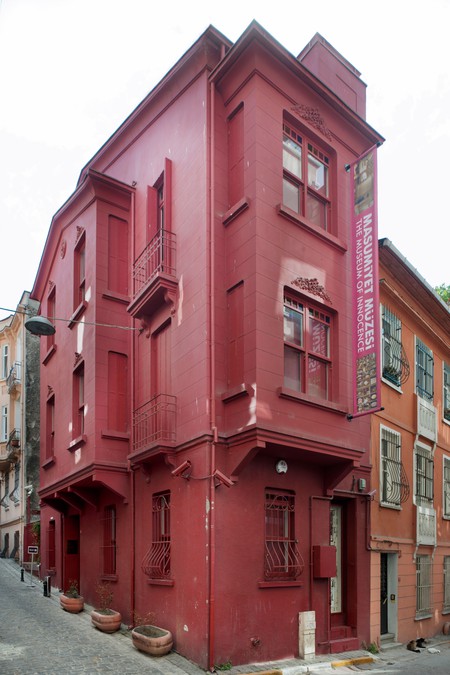 Seek out Trotsky’s house on the ‘Big Island’

That Marxist revolutionary Leon Trotsky spent years in exile (and was eventually assassinated) in Mexico is well known to many, in no small part owing to his association with the artist Frida Kahlo. Fewer, though, know that he spent four years on Büyük Ada (literally ‘Big Island’) in the Sea of Marmara, today just an hour’s ferry ride from Istanbul. It’s a pine-covered, hilly island famed for its fin de siècle houses, horse-drawn carriages and swimming spots. The Yanaros mansion where he wrote A History of the Russian Revolution is currently empty, crumbling and awaiting a buyer – and may one day become a museum. Identifying the house is an adventure in itself. 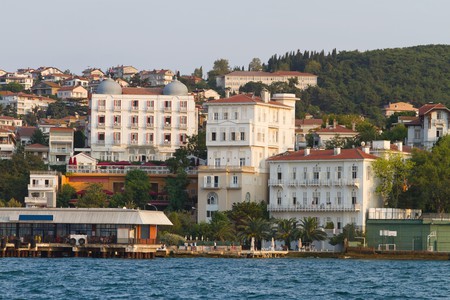