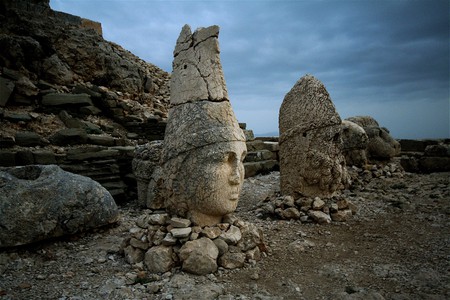 Renowned for its rich cuisine, warm hospitality, and thriving tourism, Turkey’s unique geography is also a bridge between continents and one of the original sites of human settlement. The landscape encompasses a vast and diverse historical collection, two Wonders of the Ancient World, and 15 UNESCO World Heritage Sites. Read on to discover Turkey’s top ten treasures that have left their unique mark on world history.

Whether you were enthralled by the ancient Homeric epic, the 2004 film adaptation, or any retelling in between, Troy has been a source of artistic inspiration for millennia. Very few people know that it is an actual historical place, let alone that it is located on the mound of Hisarlık in modern north-west Turkey. The excavation of the site is attributed to German entrepreneur Heinrich Schliemann, who began work there in the 1870s. With over 4,000 years of history as a connection point between Eastern and Western civilizations, Troy was named a World Heritage Site in 1998.

Close to modern Selçuk in the Izmir Province of western Turkey lies the port city of Ephesus, a remarkably well-preserved paragon of Greek, Roman and early Christian culture, inhabited since the 10th century BC. The Temple of Artemis belongs to the Classical Greek era, and is one of the Seven Wonders of the Ancient World. The Library of Celsus is a Roman addition, and was designed to serve as a mausoleum for Senator Celsus, who is buried in the crypt below. The nearby House of Virgin Mary has become an essential place of pilgrimage for Christians and non-Christians alike since the fifth century. The area is laden with interwoven tradition, and was given World Heritage status in 2015.

Near modern Boğazkale in central Turkey lie the remains of Hattusha, the capital city of the Hittite Empire. This Bronze Age civilization began in the sixth millennium BC, and virtually disappeared into oblivion in the second millennium BC. The formidable Hittites exerted notable influence on the development of nearby civilizations, and the echoes of their heartbeat continue in the astonishing and ingenious remains of Hattusha, with its impregnable walls, underground tunnels, temples, palaces, and one of the most sophisticated libraries of the ancient world. Discovered in 1834 and excavated in 1906, Hattusha was named a World Heritage Site in 1986.

One of the most striking remains of the the ancient Armenian Kingdom of Commagene can be found atop the peak of Mount Nemrut, close to modern Adıyaman in south-east Turkey. The mausoleum which crowns the summit was built by King Antiochus I of Commagene as a funerary monument for himself in 63 BC, and was given World Heritage status in 1987. The most fascinating aspect are the statues that flank the tomb; once up to nine meters high, these represent a beautiful amalgamation of Armenian, Iranian, and Greek mythology. They have been regrettably damaged by iconoclasts in the past so that only the scattered heads remain. However, the sight is still breathtaking, and its value more priceless than ever.

Çatalhöyük became a milestone for Turkish archaeology after its discovery in the 1950s. Excavations began with the efforts of British archaeologist James Mellaart in the 1960s, and has continued in full force, identifying Çatalhöyük as the world’s largest and best-preserved neolithic site. Active from the eighth to the sixth millennia BC, the settlement is thought to have housed a population of five to seven thousand people, and is packed with domestic huts, and no public buildings to speak of. Although no religious structures have been identified, the archaeological evidence suggests that their culture was laden with sacred symbols – most notably, the ‘Seated Woman’ of Çatalhöyük. It became a World Heritage Site in 2012.

When asked what is the heart of the Ottoman Empire, most people will instantly point to Istanbul. However, the next item on our list is where the story all began. The city of Bursa was the empire’s first capital, and later its spiritual and ancestral home. The first Ottoman ruler Orhan Gazi is buried here, along with other early Ottoman sultans. Captured in 1326, Bursa displays the first examples of the sophisticated urban development projects brought about by the Ottomans – most notably, the waqf system. Apart from its rich history and mythology, Bursa is also the home of the famous Hacivat and Karagöz characters, İskender kebap, Bursa peaches, and Turkish silk production. Bursa and the nearby village of Cumalıkızık were given World Heritage status in 2014. 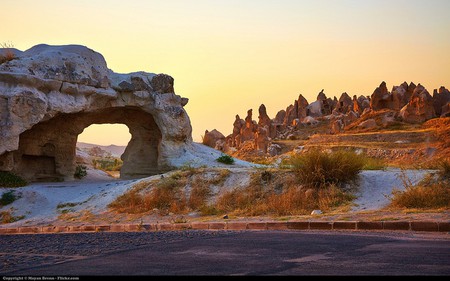 Situated in central Anatolia, close to the modern city of Nevşehir, lies the extraordinary Cappadocia region: a magical landscape of natural volcanic formations called ‘fairy chimneys’ which reach up to 40 meters into the sky. Yet it is humans that have made Cappadocia the place it is today, by carving an intricate network of caves, tunnels, and underground complexes into the malleable rock. From the fourth century onwards, it was a sanctuary for Christians fleeing persecution from Rome, which is why the area contains beautiful art from the Byzantine and early Christian eras. It became a World Heritage Site in 1985. Whether you explore the region on foot, from above via hot air balloon, or from below via the underground passageways, this is one not to miss.

Born in nearby Patara, St. Nicholas was the influential bishop of Myra (modern Demre in south-west Turkey) in the fourth century. After his death, the new church built in his name in Myra became his final resting place. This St. Nicholas is the historical equivalent of our modern Santa Claus; thus, the site is widely regarded as one of the most important Byzantine structures in Anatolia, and was a place of worship and pilgrimage from the fifth to the 12th centuries. The church was later flooded and buried under silt, then discovered and partially restored by Russian Tzar Nicholas I in 1862, and has been under official excavation since 1988.

This astounding site, close to the modern city of Şanlıurfa in south-east Turkey, turned everything we knew about prehistory on its head. Discovered by German archaeologist Klaus Schmidt in 1994, excavations at Göbekli Tepe began under his leadership and led to the revelation that the temple structures were built sometime in the tenth millenium BC – predating Stonehenge by six millennia, and the Pyramids of Giza by seven. Cleanly carved limestone pillars and no evidence of domesticity whatsoever have further bewildered archaeologists regarding its construction. As the oldest currently known example of monumental architecture in the world, Göbekli Tepe suggests that rather than agriculture, it may have been the urge to worship that brought people together.

Built on the ruins of two previous churches after the Nika riots of 532, the Hagia Sophia was Byzantine Emperor Justinian I’s crowning achievement. Constructed in only five years, the avant-garde architecture of the building has allowed it to stand the test of time and nature as the one landmark that truly represents the cultural diversity of Istanbul through the ages. Primarily an Orthodox basilica, it was briefly converted into a Roman Catholic cathedral during the Fourth Crusade, then became a mosque after the conquest of Istanbul in 1453. Each culture has regarded the building as the highest platform of spirituality and art; thus, the monument is laden with valuable historical traces from the last 1,500 years. Since 1935, it has functioned as a museum, and was given World Heritage status in 1985.