These Turkish Musicians Are Bringing Back 80s Electronic 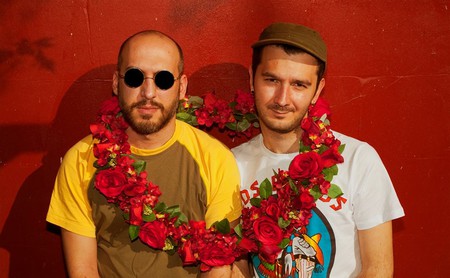 Jakuzi is an Istanbul-based Turkish-language synth-pop band that can’t be compared to anything else on the Turkish music scene. A clear 80s influence rings true in their new wave style, especially their videos in all their VHS-style glory.

With Kutay Soyocak on vocals and Taner Yücel on bass and synths, Jakuzi is one of the most original bands in Turkey’s underground music scene at the moment. After having released their first album Fantezi Müzik in March 2017, the duo has already graced the stage in Turkey and major cities in Europe. Their first single, Koca Bir Saçmalık made an immediate impression with its synth-disco sound and lyrics about disappointment and anger with more than a 100,000 views on YouTube for its accompanying video.

For all their 80s, post-punk, and disco influences, Jakuzi’s songs are very much connected to their native country and the duo sing in Turkish only. Before the release of their first album, the pair released a few of their songs on actual cassette tapes (talk about nostalgia) as well as their page on Bandcamp, and were able to quickly accrue a following in their native Istanbul.

Truly unique in their sound, Jakuzi is a mix of lo-fi pop, new wave, dark wave, and plenty of 80s-style influences that feel like a small sojourn to the past. On their Facebook page, the band describes themselves as ‘David Bowie having a fever dream in Turkey, Depeche Mode stranded at the Bosphorus’, and those descriptions seem quite apt when one enters the world of their first album.

Jakuzi is also an active reminder that Turkey has a vibrant underground music scene that often doesn’t get the credit it deserves. The duo are only one example of the many artists who are making their mark in Istanbul, and slowly leaving their impression on the larger international music scene. As such, Jakuzi is not only a band but also an opportunity to change perceptions regarding contemporary Turkish music and all its young and talented proponents.

Apart from a rare style, Jakuzi is also a standout due to their lyrics, which are often raw and sensual, and wholly introspective. During the making of the dreampop song Belki De Sen Haklısın, for example, Soyocak and Yücel were both facing issues in their relationships, and the music they made together presented itself as a way of personal resolution. Another song entitled Lubunya, expresses their respect for people of trans-orientation and is a first for the Turkish music scene. As for their music videos, the band uses VHS video effects that haven’t been seen since most of us were quite young.