The Sultan’s Snacks: The Origin of Fast Food in Sultanahmet, Istanbul 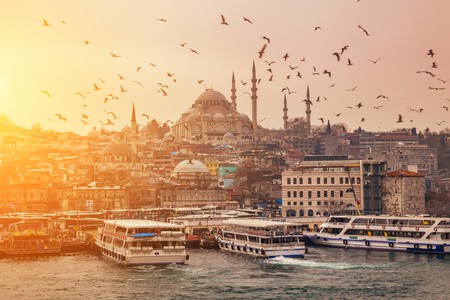 6The term ‘fast food’ may have appeared in the Merriam-Webster dictionary only in 1951, but in Istanbul’s ancient Sultanahmet district, its roots are much older and deeper.

Food on the go in Sultanahmet fuses age-old cooking traditions with the needs of the modern world. Today, there is an appetite for culinary nostalgia in the Old City, with local youth determining Turkey’s gastronomic direction, using recipes that are several centuries old. Over 25 percent of Istanbul’s 14 million inhabitants are employed one way or another in the food business, ensuring the continuation of the city’s rich culinary know-how. Culture Trip explores how fast food has always been a part of Sultanahmet’s gastronomic repertoire. 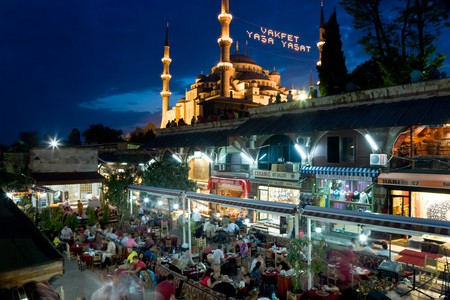 Istanbul’s prosperity owes much to the Bosphorus Strait that cuts through it, connecting the Black Sea to the Sea of Marmara, and the point at which Asia and Europe meet. Along this route spices, fruits, herbs, poultry and livestock were transported by merchants from Syria and Iraq to the south; Iran, Armenia and the Azerbaijani exclave of Nakhichevan to the east; and Georgia to the northeast.

Other cooking influences arrived on vessels traversing the warm waters of the Mediterranean Sea (to the south) and the Aegean Sea (to the west), with the Greeks, Persians and Romans all having their place in Istanbul’s storied food past. Unusually, perhaps, the imperial households were instrumental in developing Turkey’s cooking traditions. “A sultan must feed his people” was the decree of Ottoman and Byzantine times – an ethos that remains deeply entrenched in Istanbul’s food culture – and none more so than in Sultanahmet, once the seat of both empires, where food soon became a symbol of the bond between a ruler and his subjects. 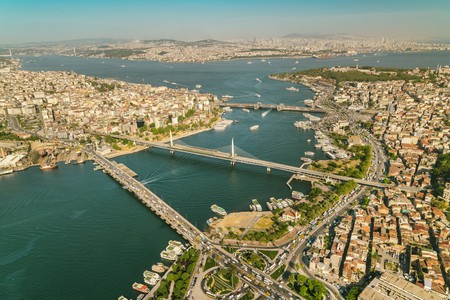 Street food fit for a king

By the time a certain golden-arched American burger chain began to gain mass appeal in the 1950s, fast food in Istanbul was already at least a century old. And while in some global cities, fast food can mean hastily cooked, unhealthy food, routinely mass-produced, often reheated and served at speed, the foods served in Sultanahmet for generations have always been fit for a king. 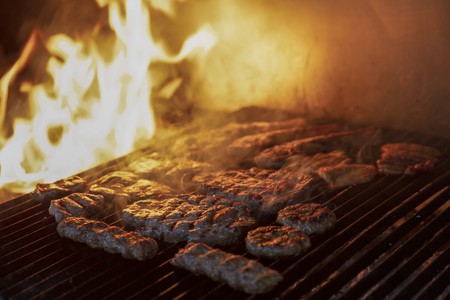 The köfte was introduced in the 13th century | © asikkk / Getty Images

Meatballs for the masses

It was here in the 13th century that köfte, the nation’s much-loved meatball, was first introduced by Persian merchants when the city (then Constantinople) was Europe’s largest and wealthiest. Today, the köfte transcends social classes, but it was originally a sultan’s snack: a fist-size ball of finely chopped beef flavoured with garlic, flat-leafed parsley, cumin and coarsely ground dried chilli, succulent in the middle with a crispier exterior, served straight from the grill wrapped in hazelnut leaves.

Fast food as a concept dates back to the 13th century in Sultanahmet, when the Sultan first vowed to “feed his people”. It changed the food of the city forever, as meals were prepared using the palace’s large staff of cooks (more than 1,500 at its height) and the freshest foodstuffs stored in government larders. Salad crops and vegetables were transported in daily from the 50,000 farmers who worked the land on the fringes of the city, to ensure that it was beautifully fresh. The ruler’s chefs hoped to catch the sultan’s attention through their cooking, so Sultanahmet became a creative stewpot of culinary experimentation. Cooking became bolder and faster; with thousands of mouths to feed, there wasn’t time to fuss or dawdle, and no expense was spared. As well as köfte, Sultanahmet’s fast food for the masses included doner kebab, thin slices of meat pressed together and spit-roasted, small pieces of meat on a skewer (shish kebab) and dried beef (pastirma). All of these were made with only the best lamb – and the annual order topped 1,800 tons. 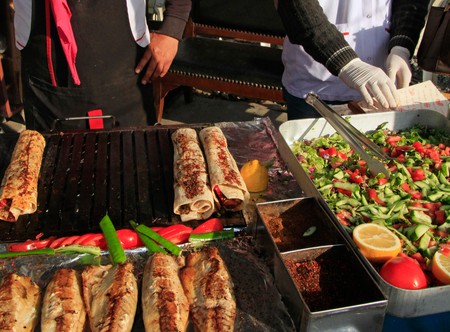 Today, each köfte chef (köfteci) has their own special spice mix, with those of Sultanahmet being the most authentic. It is here that you’ll find cooks working at regular grilling spots, on the same corners their fathers and forefathers occupied before them. Synchronised with the rhythm of times and seasons, these chefs will only stray occasionally to roam Istanbul’s alleys and avenues for trade. You will see them flipping meatballs and slicing fat red tomatoes at speed, before wrapping the charred köfte in paper with a squeeze of lemon. Ask for köfte ekmek if you’d prefer it served in fresh, crusty Turkish bread. 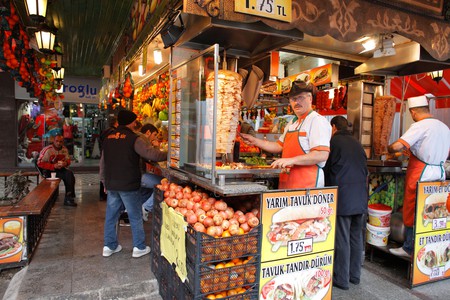 In Sumerian, the language of ancient Iraq, kabuba means ‘to cook on embers,’ while in Arabic it means ‘to fry meat’. Kebap is grilled or broiled meat on skewers, much as the ancient tribesmen of Persia are known to have flame-cooked meat on their swords. Though there are similar dishes across the Middle East, what we know today as the doner kebab (the ‘doner’ simply means ‘rotating’) is an innovation that is uniquely Turkish, hailing from Sultanahmet. Variations include döner dürüm (doner meat wrapped in tortilla-like thin leaves of bread) while ıskender kebap is doner meat served on pieces of pide (bread) dressed with butter and yoghurt on the side (also known as bursa kebabı).

You’ll find dönerci (doner makers) at pushcarts, market kitchens and kiosks all around the district: study the sky for a plume of greyish-white smoke, or simply follow your nose. Portable grills spit, sizzle and griddle at every corner of meydanlar (public squares), often a stone’s throw from the köfteci and balik-ekmek stands, another Sultanahmet fast-food delicacy. This delicious grilled white-fish sandwich is served with a salad of raw onions, tomatoes and spicy rocket and a squeeze of lemon, generously seasoned with salt and pepper. Once, only fish hauled from the Bosphorus were used for Sultanahmet’s balik-ekmek, but today it could come from anywhere along Turkey’s coastline, arriving fresh from the nets in Istanbul overnight. 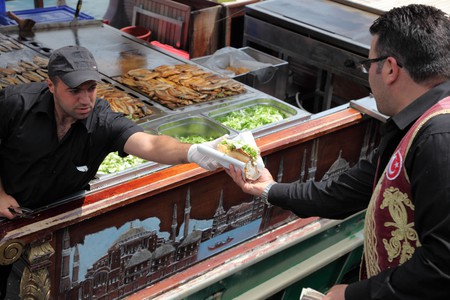 Other favourites to look out for that have been served on the streets of Istanbul since Ottoman times include Istanbul’s breakfast-on-the-go simit, a dense ring-shaped molasses-dipped bread; kokorec, spit-roasted offal cooked over charcoal, and kestane (roasted chestnuts), which are served all year long.