The Story Behind the Underground Cities in Turkey 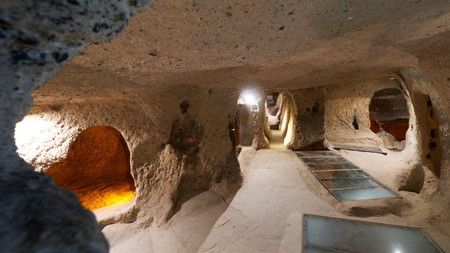 Kaymakli is one of the most famous underground cities in Turkey | © PHOTO.ZOOMMER.RU / Alamy Stock Photo

The subterranean cities in Cappadocia have become famous worldwide, just as much as the unusual fairy chimneys that characterise the landscapes in the region. Discover the history behind the fascinating settlements of Kaymakli and Derinkuyu in Turkey.

Want to explore the vibrant bazaars and rocky valleys in Turkey? Book Culture Trip’s 12-day group tour, where you’ll stop at key historical sites and glide across the landscape in a hot-air balloon.

It is believed that the underground cities of Cappadocia were initially built during the eighth and seventh centuries BCE by the Phrygians, who carved their living spaces into the region’s soft volcanic rock. There are around 200 cities in total in Cappadocia, with the most visited including Derinkuyu and Kaymakli.

The idea behind the subterranean cities was to protect the inhabitants from foreign invasion, allowing thousands of people to live their lives in total secrecy. During the 14th century, the caves provided Christians with a safe haven from the threat of the Mongolians during the assaults on Timur. Even during the 20th century, they enabled people to save themselves from persecution during the Ottoman Empire.

It was not until 1923, after the population exchange between Greece and Turkey, that the underground cities were completely abandoned and, then, not rediscovered until 1963. The story goes that a resident found a strange room behind a wall inside his house, and the rest is history.

One of the most famous underground cities in Cappadocia is Derinkuyu, built during the Byzantine era, when its inhabitants used it to protect themselves from Muslim Arabs during the Arab-Byzantine wars between 780 and 1180 CE. The multi-level city was composed of many passages and caves lying at around 60m (197ft) under the ground and was able to shelter around 20,000 people as well as their livestock and food. It’s certainly the deepest underground city in Cappadocia (and in all of Turkey). Derinkuyu was opened to visitors in 1969 – albeit, with only half of the city available for viewing. 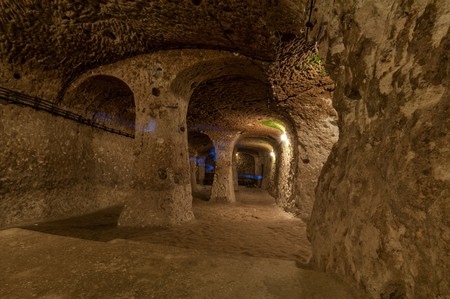 In its heyday, the city had two large stone doors that were closed from the inside in case of imminent danger. Though the inhabitants might have been hiding, they lived their lives to the fullest, as much as they would have in an above-ground town: remains of wine cellars, stables and chapels have all been uncovered. One of the most striking spaces in Derinkuyu is a large room with vaulted ceilings, which is believed to have been a religious school with separate study rooms. Derinkuyu was also connected to the other underground cities through a sophisticated network of tunnels. 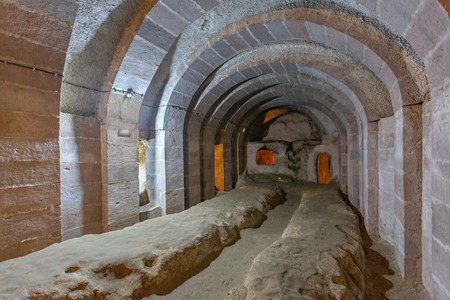 Originally named Enegup in ancient times, Kaymakli Underground City was also used as a shelter for local inhabitants for several centuries throughout the Arab-Byzantine wars. During this time, it was significantly expanded to the point where it, eventually, became the widest underground city in Turkey. It’s estimated that, at its peak, the population of Kaymakli grew to around 3,500 people.

After being opened to the public in 1964, it was awarded Unesco World Heritage status in 1985. It offers a fascinating window into the past, descending eight levels deep – although only the first four can be accessed by visitors, which lie at around 20m (66ft) below ground. As a general rule, the wealthiest families lived closer to the surface. While exploring Kaymakli, you’ll pass by stables, storage rooms (some of which are still used today), former homes, a church and communal kitchens, where meals were once cooked en masse for the city’s population.

As you meander through this subterranean labyrinth, you’ll also notice plenty of large, round boulders, which used to be rolled in front of doorways as barricades to protect the local inhabitants from potential attacks. Remember to pay attention to the red arrows, which guide you down, and the blue arrows, which guide you up, to avoid getting disorientated.

In comparison to its neighbouring underground city, Derinkuyu, Kaymakli’s tunnels are noticeably narrower, lower and more steeply inclined – worth bearing in mind if you’re claustrophobic. A 9km (5.6mi) tunnel actually connects the two, but it’s not accessible to visitors. You can drive between Kaymakli and Derinkuyu in just 10 minutes, though, so it’s easy enough if you fancy exploring both in one day. 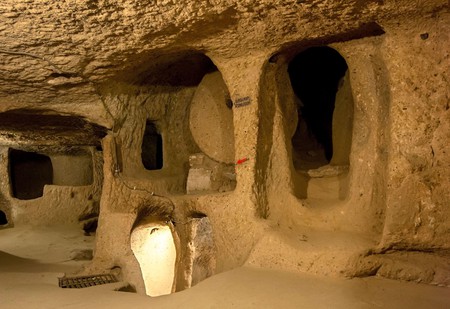 How to visit Derinkuyu and Kaymakli Underground Cities

Derinkuyu and Kaymakli can be reached by regular dolmuş (shared taxi or minibus) services from the nearby city of Nevşehir. If you’re staying in Göreme, take a dolmuş to Nevşehir (around 15-20 minutes) – or, if you have a hire car, you can drive there directly. From Nevşehir, it’s a straightforward journey down a single well-paved road, taking around 20 minutes to Kaymakli and 30 minutes to Derinkuyu.

Entrance fees for each underground city tend to fluctuate slightly year by year but, usually, cost around 60 Turkish lira (£5) for adults. Eight-year-olds and under can enter for free.

Visit Kaymakli Underground City with Culture Trip as part of a small group of culturally curious travellers on our Ultimate Turkey Trip.