The Point Of No Return: Time And History In The Art Of Hale Tenger 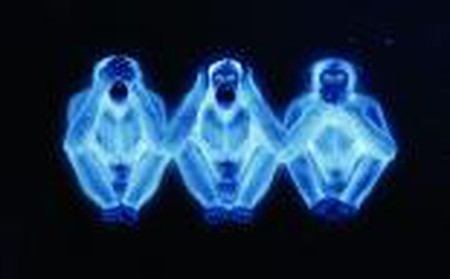 Turkish artist Hale Tenger interrogates time and history within her works, considering the relationship between power, memory and culture. Arie Amaya-Akkermans looks at her works to uncover what they say about the present, and the past. 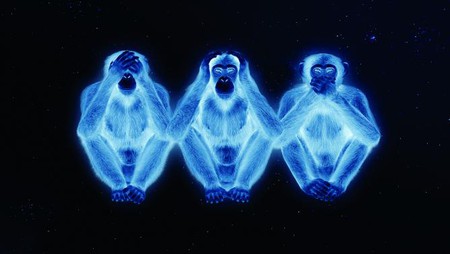 Hale Tenger, Swinging on the Stars | Courtesy the Artist

‘Beyond a certain point there’s no return. This point has to be reached.’ – Kafka

An event horizon is, for the scientist, a boundary in the mathematical continuum of space and time; a boundary after which events cannot affect an outside observer. The terminology, though somewhat familiar to laymen, is very difficult and is indebted to Einstein’s general relativity. The event horizon is a point of no return out of which the gravitational pull is so strong—density becomes infinite and volume drops to zero—as to make impossible the scape of any particle within time or space; light is no longer able to travel. These gravitational singularities—and apparently the universe was born out of one—are no longer representable in coordinate planes and one needs a lot of imagination to picture lines that become curvatures or cones and then disappear unto themselves.

The event—like death—remains incomprehensible, thus absolute. But there’s a misconception: That of event horizons as a visible (albeit by contrast) and immutable surface that swallows everything that approaches it. There’s even a film, from 1997, also titled Event Horizon that describes exactly this. In the year 2047 a rescue vessel is dispatched to inquire on the whereabouts of a spaceship, launched to generate an artificial black hole—the most common form of event horizons—in order to reduce travel time over astronomical distances. A member of the crew returns in a catatonic state after having been exposed to the ‘outside’ of the known universe and is placed in stasis after he attempted to commit suicide over what he witnessed ‘in the other side.’

It was Susan Sontag who said that science fiction—in particular films—is not about science as much as it is about disaster, which is one of the oldest topics in the history of art. The reality of the event horizon as we understand it nowadays—uncannily similar to an established set of practices in contemporary art—is that in fact, an event horizon, in the case we would witness it from close, appears always to be at some distance from the observer no matter how closely we are drawn towards it, and any object sent towards an event horizon will never appear to have crossed it from the observer’s point of view. The light cone of the event never intersects with the world line of the observer. An event horizon behaves as something that never truly existed.

How is it that it never truly existed? The observer can never touch the horizon or be at a specific location where an event horizon appeared to be. Light cones—a path of a flash of light—emanating from a single event, and travelling in all directions, present us with an observational paradox here: Situated on the position of the present—called in science hyper-surface of the present—we are able to observe the past but never the present. Are we perhaps already in the future? It’s difficult to tell. But on a clear night and with the help of adequate tools, it is possible to see the past billions of years ago according to the path of light travelled by those events, still visible. Not without irony, the recent past is more and more difficult to see; more and more specialized tools are required.

Hale Tenger, I Know People Like This II | Courtesy the Artist

And in human history it is all the same. After seeing Hale Tenger’s recent artwork Swinging on the Stars (video on large screen format), shown in Istanbul last month, one cannot help but thinking that he is confronted with the ultimate event horizon in Tenger’s work. Not surprisingly enough, the versatile Turkish artist began her work in 1990 with two singular sculptures, History of Time and Progress. Working on hard materials such as iron, bronze, and steel wire, Tenger manifested early on her uneasiness with the question of progress, though the artist declares that at the time she was more involved with her own person and life than with questions of history. It is perhaps true that works of work complete each other only later when the subsequent context for their creation re-surfaces with tacit answers. Nevertheless the artist has also moved onto softer, why not say it, almost imperceptible materials.

From History of Time throughout Swinging on the Stars, Tenger makes manifest her preoccupation with historical objects not in terms of sequences, teleologies, and final destinations—which might well be one of the obsessions of modern art—but rather with the larger, or even largest structures of history: The narrative. The reason why one is tempted to call her most recent work an event horizon is because of how closely interwoven it is with recent and not so recent work of the artist along a very specific line. About History of Time, she says: ‘They’re all teetering, ready to fall.’ Is she speaking here maybe about a history without foundations? And when you come to think about it, all histories are in fact accidental, ironic and without foundations

A pictorial maxim, popularized since its appearance on a 17th century carved door of the Tosho-Gu shrine in Japan, carved by Hidari Jingoro, known as ‘Three Wise Monkeys‘, appearing on the 2nd out of eight panels carved on the famous door, are supposedly embodying a proverbial principle derived from Confucius’ Code of Conduct: ‘See no evil, hear no evil, speak no evil.’ The monkeys depict the life cycle of man on a cosmic scale. And this perhaps how her early works, such as History of Time and Progress appear: As a history of man and of progress not viewed through the inner logic of history and the grand political narratives but through the prism of the event, the geographical mutations, the journeys of man, the cultural transitions between different media—history on a cosmological scale as if seen from outside the limitations of the earth and gravity.

The three wise monkeys appear in Tenger’s work as early as 1992, with two controversial works that deal explicitly with Turkish politics and history. It would be perhaps unnecessary to label Hale Tenger’s work as political, because the aesthetic and the political have to necessarily overlap in art as the subject of art becomes an object of the world and therefore an element in object-based learning about the experience of participating in the world itself. Any art work is capable of doing this, if sufficiently endowed with an internal logic that does not submit to prevalent ideologies, but rather question them all at the same time by presenting the instability of life and ideas as questions and doubts. 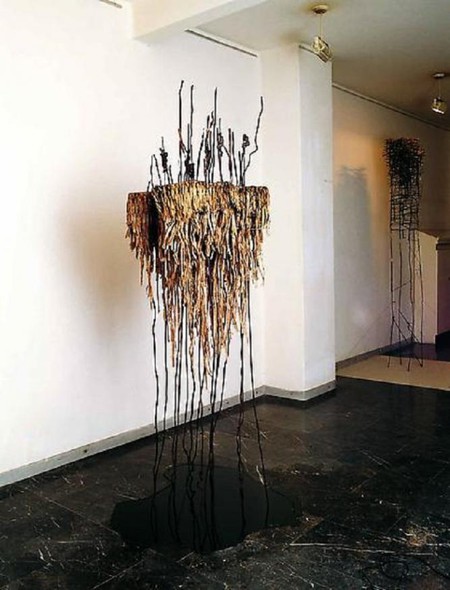 In I Know People Like This II the monkey statuettes appear in a large scale work (700 cm X 140 cm) that one is never sure whether to call it sculpture or installation, apparently representing the Turkish flag and consisting of hyper-phallic brass Priapos gods and the three wise monkeys. The work perhaps started to awake and consolidate some sensibilities in the artist, or what she calls, a sense of ‘urgency,’ as she began to confront—not without irony—the political realities of Turkey, a country in which traditionally, the wisdom of the three monkeys is adopted as the lifestyle of indifference in which people seek shelter from the outside world, in private and incommunicable realities, becoming shakier and shakier each time, as the writing on the wall becomes too clear.

This artwork, produced for the 3rd Istanbul Biennial landed the artist in court on the Kafkaesque charges of violating the penal code and insulting the Turkish flag; charges to be dropped a year later when the flag turned out to be not really a flag, but more like a microcosm. The stellar journeys of Tenger begin to appear in this work—and in some others, but too numerous to mention here—but her project starts to consolidate as a force of time against oblivion. The artists seem to be actively engaged in witnessing, and more than witnessing, presenting environments and situation that sometimes appear in the format of installations but that are construed as total realities—hence, they’re unsettling—from which it is impossible to withdraw.

It was however in Necessity of Air that the situational landscapes for which she is known today emerged. As a skilled archaeologist and ethnographer of the present (in)tense, Tenger used the materials of the Atatürk Library to set up a sham scientific and ethnographic institution, oscillating between museum and library, so well executed that many artists thought this section of the library actually existed and that Tenger only performed small-scale intervention on-site. It is in this project that her notion of ghost and the haunted, as elaborated by Nermin Saybasili, appears, based on a reading of Derrida’s ‘hauntology.’ The artist, though trained as a sculptor, returns here to the use of raw materials and the re-arrangement of objects and stories into realities through absence.

Recreating the Turkish approach to museology—still prevalent today—the artist engages in the criticism of a country, through some of its most revered objects, reinforcing her ambiguity between the object and research approaches. A document on the founding of Istanbul appears in the exhibition, and that for all its historical importance, it is also showing how similar is the invisible present to the ungraspable past that seems remotely placed inside an event horizon. But here again, the monkeys re-appear as small statuettes on a book found in the library archives, embedded on a stellar map. Tenger experiments with Turkish lexicography and historiography, showing how easy it is to re-arrange history, to un-make it, to produce it, and ultimately to control it.

And the journey of the three wise monkeys seems now complete: through the microcosm of a supposed Turkish flag and the incisive intervention on Turkish museology, the three monkeys, perhaps representing the complacency of the people—a complacency born out of a combination of economic comfort and political ineptitude—in which seeing, hearing, and speaking seem to lead nowhere but to error. And why are the three monkeys now swinging on the stars? It is precisely the event horizon, the ultimate horizon, similar to death and disappearance: the history has become remotely inaccessible, the memory corrupted, the language unsuitable to describe the modern experience and perhaps even the art a little boring.

What is left then? One can never be sure that the artist’s journey is complete, not even the artist would know that. Yet there’s a fourth monkey in the carved door from Tosho-Gu, his name is Shizaru, embodying the principle of ‘do no evil’ while at the same crossing his arms. And perhaps Shizaru was sitting there in the audience, with Hale Tenger and all the people who saw this work in Istanbul. He was perhaps thinking that it is impossible to act in the world if one never hears, says or sees any evil. And that little fourth monkey, invisible, as many of the missing persons in Hale Tenger’s installations, going away before they could finish their breakfast, finds himself suspended, beyond the horizon event, between a past that he doesn’t understand and a present that never quite arrives. 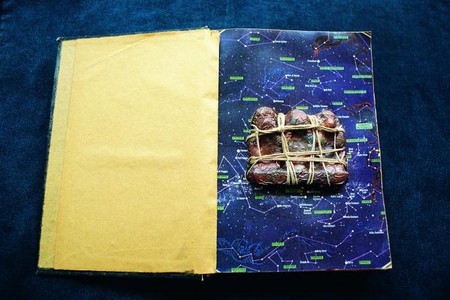