The Best Tattoo Artists in Istanbul 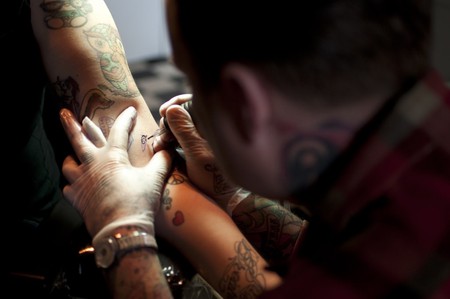 When you spend enough time in Istanbul, you’ll quickly come to realize that tattoos are almost ubiquitous among the young people of the city. Of course, not all tattoos are good tattoos and there are only a few artists that have managed to make their mark with their excellent work and own designs. Check out some of the best tattoo artists in Istanbul below.

A self-taught artist who has managed to stay down-to-earth despite his talent (and many clients), a session with Savcı is always totally relaxed no matter how many hours the tattoo takes. His studio in Istanbul’s Karaköy neighbourhood is exceptionally clean and organized and the artist is very meticulous about his work as well as the care necessary for his tattoo to heal properly. Apart from his custom designs, which can be seen hanging all over his studio’s walls, Savcı specializes in Japanese, old school, geometric, watercolour, linework and dotwork techniques.

Once part of Istanbul’s infamous Lucky Hands Tattoo Parlour, Denizhan Özkar continues doing his exceptional work from his home studio alongside his girlfriend Biçem Şınık (who also happens to be on this list). One of the first artists to work with the dot work technique and the creation of geometric motifs, Denizhan’s tattoos always stand out due to their minute details, original visual stories and a consistency that make people wait for weeks to get an appointment.

An artist who is considered one of the main female leads in Istanbul’s tattoo scene, Biçem’s designs are downright unique. A former art director, Biçem bestows line work, minimal designs and dot work with an exceptional feminine touch, which has allowed her to garner notoriety in a very short amount of time. You’ll find exceptional detailing but also a sense of calm and controlled beauty in her works. Due to the fact that she and Denizhan run a small home studio, you’ll have to be prepared for long waiting times after you’ve managed to make contact.

Speaking of Lucky Hands Tattoo, it was Emrah Özhan who founded the infamous parlour, now running his own studio in the Moda neighbourhood on Istanbul’s Asian side. It can be said that it was Özhan’s experience that pushed him to the top of the city’s tattoo scene, and after years of dabbling with many different styles, he was able to find his own, which has made him a name to be reckoned with in Turkey and abroad. You’ll find designs that meander between the traditional and the modern, the flawless and the utterly idiosyncratic while succeeding in never presenting the same thing twice.

After having opened his own tattoo parlour in Eskişehir in 2008, Okan made his way to Istanbul and now runs the wildly successful Golden Arrow Street on Istanbul’s Asian side. With his unique designs and impeccable techniques, the artist dabbled with many styles until he arrived at his signature minimalistic aesthetic, something that has won him third place at the Berlin Tattoo Convention and allowed him to partake in collaborations with studios all over Europe.