The Best Of Turkish Architecture 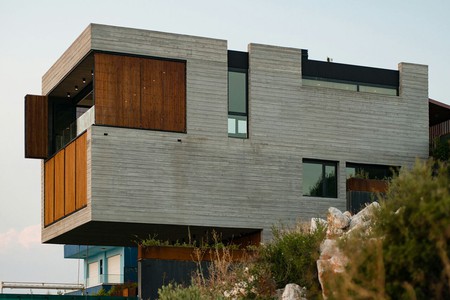 When Turkish architecture is mentioned, the famous works of Mimar Sinan are the first to spring to mind. However, more recent projects in Turkey by both local and international architects have made their mark both visually and in the design world. From modern office buildings to unusual summer homes, we select some of the most interesting projects from 2015-2016.

Located in the Sakarya region, the S2OSB building belongs to the Sakarya 2nd Industrial District’s Board of CEOs and was designed by BINAA architects in 2016. The façade is made of crafted metal (more specifically anodized aluminum sheets), which wrap around the building helping to communicate the structure’s various functions. The conference hall is composed of a geometrically-textured shell with both solid and perforated panels, while a separate foyer holds the offices specifically designed for executives and engineers.

Designed by Collective Architects & Rasa Studio in 2016, the Lüleburgaz Bus Station was meant to be a symbolic and unique point of entry to the city. Inside, the design is very novel in placing no separations between departure and arrival areas, with ticket sale offices and shops placed between waiting lounges. Located on the Edirne-Istanbul main road, intercity bus platforms and regional bus platforms are separated on the north and south side, while a sloped roof system is used to create a public space up front including restaurants, cafés, and commercial spaces.

Created by architect Selim Erdil, Ma Vie La is a summerhouse in Çeşme with a strict minimalistic approach. Alongside the use of five main materials (concrete, steel, stone, wood, glass), the house makes use of the land as much as possible while creating a variety of wide and open spaces. Folding and sliding windows and door systems, the eight-meter cantilever, and the pool on the side of the house all maximize living areas while creating a relationship between the interior and the exterior. The common areas and bathrooms have marble flooring and the bedroom floors are rustic oak wood, while the garden has local olive, mastic, and cypress trees.

Designed by London’s AUDB Architects, the School of Foreign Languages in İzmir is another endeavor with a commitment to research and development projects in the region. The design was a bit tricky at first, given the high number of necessary functions and a limited space. As such, the functions were spilt into two main groups: classrooms and support spaces, which are organized in a convergent/connection concept. The structure also prefers traditional solutions rather than the glass/steel style of modernist buildings. Solid walls have windows that are based on internal function, so that teaching spaces get a variety of light and shade conditions. Each floor is also identified by a color related to the flag of the country whose language is being taught.

School of Foreign Languages in Turkey / AUDB Architects; Ardali Structures, 2016 the concept for the #building is closely related to the historical evolution, relation and learning of languages, convergence and connection. the #functions are split into two main groups: the classroms and the support spaces. on the ground #floor these two functions are organised as directional spaces that cross over and converge at the vertical circulation location. the classroom requirements are significantly more than support #spaces. these aim to merge at the top of the building as a traditional #corridor/ #classroom archetype. #AUDBArchitects #college #university #school #architecture #Architecture_LEAD #Design #façade #Izmir #Turkey