The Best Hotels in Istanbul's Old City of Sultanahmet 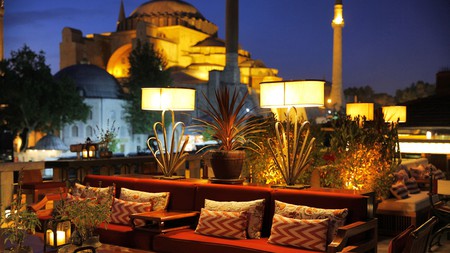 The Blue Mosque, the Hagia Sophia, the Basilica Cistern, the Topkapı Palace, the Hippodrome – most of Istanbul’s biggest draws are located in the old city of Sultanahmet, as are some of the city’s best hotels.

For many, Sultanahmet – the extraordinary Old City of Istanbul, on the Bosphorus peninsula between the Balkans and Anatolia – is reason enough to visit one of the greatest cities in the Mediterranean region. Here, two thousand years of history, culture, empires and architecture are layered, and collectively the historic areas are a Unesco World Heritage Site. Relatively compact, walkable, lively and astonishingly photogenic, the array of accommodation in Sultanahmet caters to all tastes and budgets. 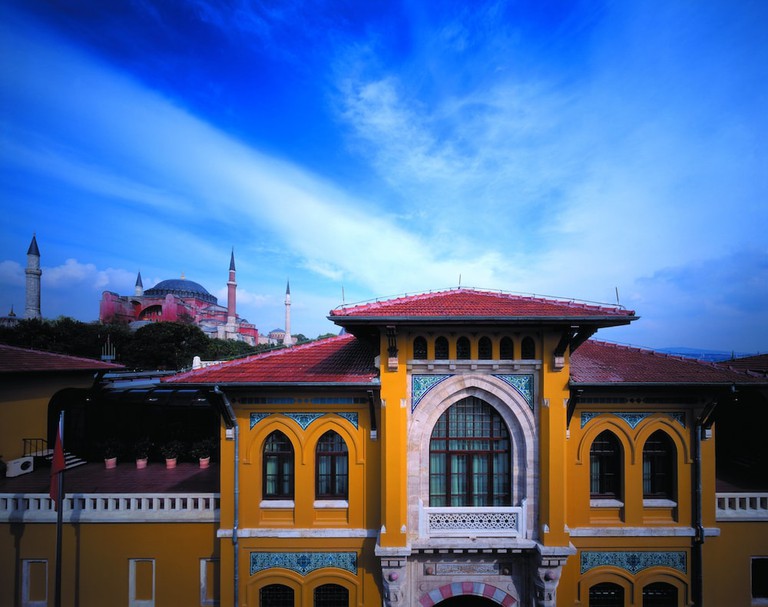 Courtesy of Four Seasons Hotel Istanbul at Sultanahmet / Expedia.com
View Rooms
Doing time at the Four Seasons might be a highlight of visiting Istanbul, because this former Ottoman-era prison, built in 1919, has some of the best views of the most iconic city landmarks. Arranged around a pretty shrubbery-filled courtyard (the former exercise yard) and a restaurant pavilion, the mostly unadorned golden-yellow facade features slender arched windows and a few panels of decorative tiling. Princely interiors exude a refined Ottoman sensibility, with pinched arches, vintage furniture, rugs and kilims, together with framed artworks and manuscripts.
More info 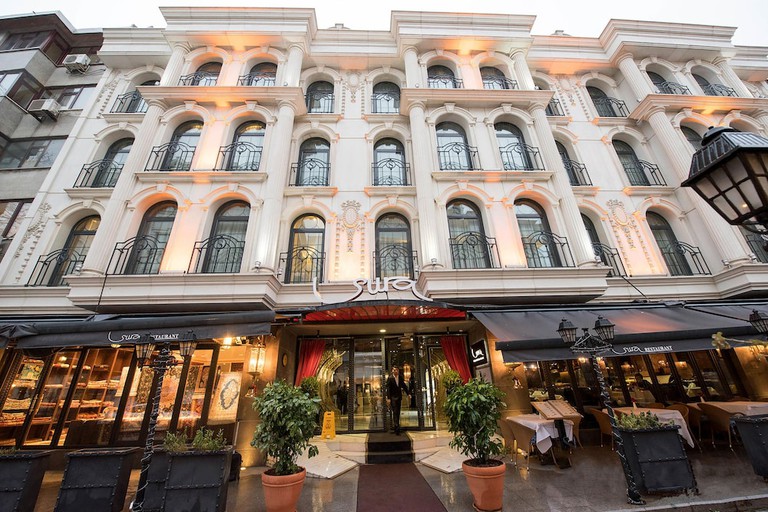 Courtesy of Sura Design Hotel and Suites / Expedia.com
View Rooms
This handsome neoclassical mansion near Hagia Sophia almost completely subverts its architectural pedigree with boldly modern, almost clubby, interiors that exude a youthful vibe. The grooviness is rather studied, from the scarlet drapes in the lobby to the molten lava wall designs and life-size equine statues. The swanky rooms have wall and ceiling roundels – either decorative or with recessed lighting – plus vast mirrors, lattice panels and glass-wall bathrooms. The sister property next door has a charming garden and pool.
More info 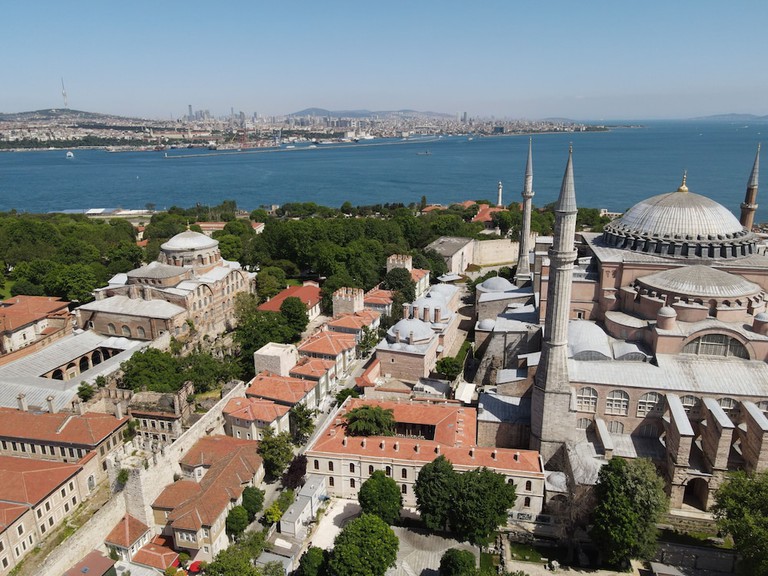 Courtesy of Hagia Sofia Mansions Istanbul / Expedia.com
View Rooms
Almost in the shadow of the splendid Hagia Sophia, the 19th-century weatherboard facades of the Mansions suggest an alluringly genteel history. Comprising two separate but proximate buildings with courtyard gardens and varying amenities, the style is distinctly modern Ottoman, with enough decor and stylistic touches – lanterns, vintage-style inlay furniture, decorative tray ceilings and rugs – to create a polished yet historic atmosphere. There are a greenhouse and garden wining and dining, and a hammam, along with an unusual indoor pool in an ancient Roman cistern with vaulted brickwork.
More info 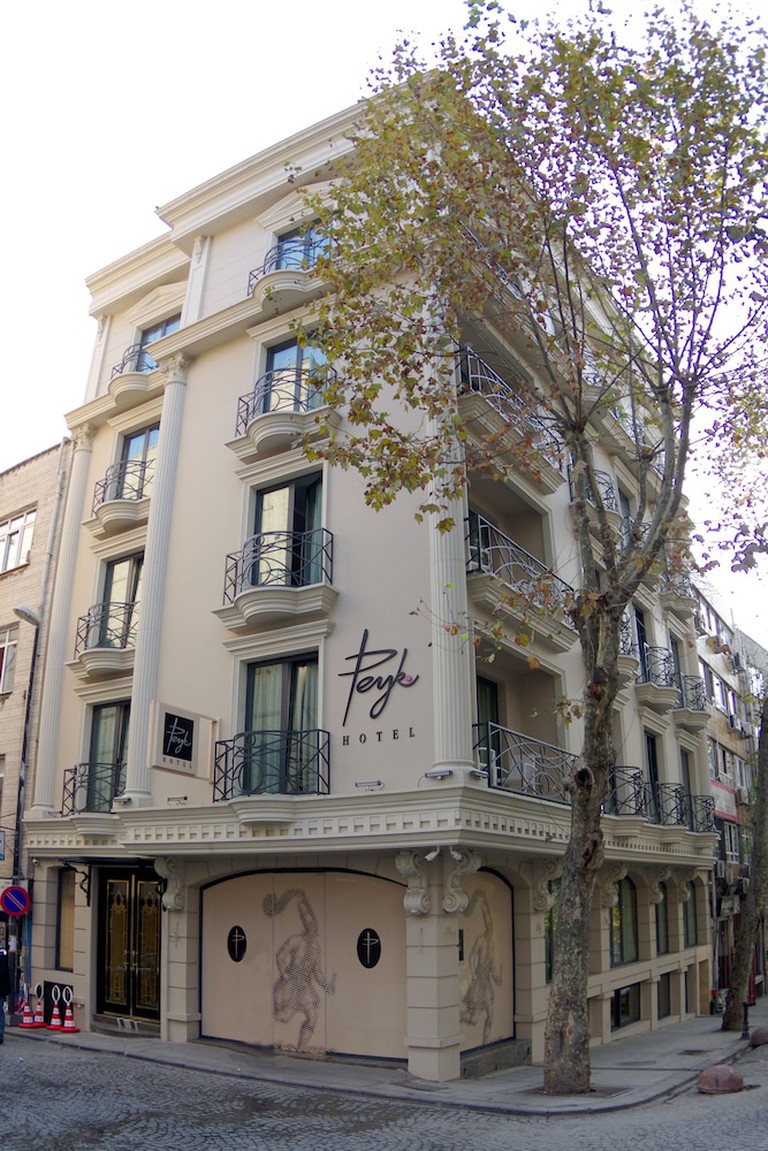 © Peyk Hotel
View Rooms
The facade may have neoclassical pretensions and the balconies art nouveau-style railings, but the Peyk is essentially a cosy, modern hotel near Sultanahmet Square. Rooms are functional yet comfortable and, bar the peculiar blackout curtains bearing printed portraits of courtly Ottoman musicians and vintage Bosphorus maps, there’s little in the way of Turkic decor. There’s a modest restaurant (whose pillars have fanciful hieroglyphs echoing those on the nearby Obelisk of Theodosius) and rates include a complimentary buffet breakfast.
More info 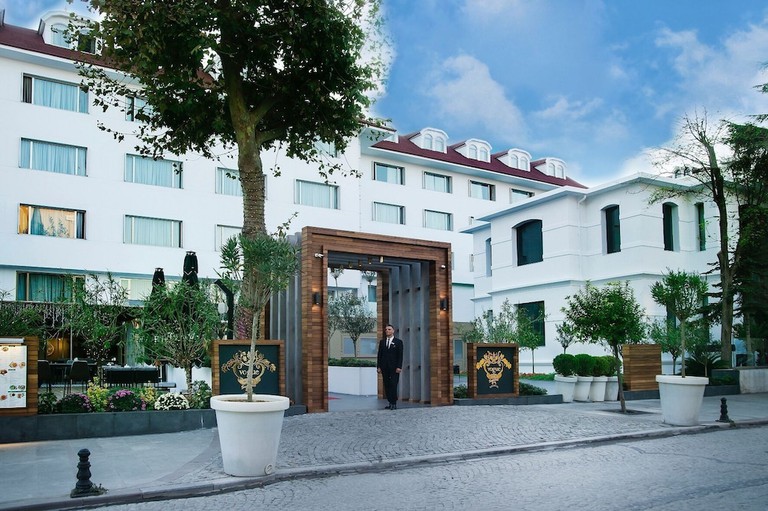 Courtesy of Vogue Hotel Supreme Istanbul / Expedia.com
View Rooms
The six-storey building of the Vogue – it could almost be a 1970s airport hotel – opposite a small mosque doesn’t quite match the plum location near Hagia Sophia. It’s a straightforward and unpretentious property whose terrace cafe and restaurant provide a pleasing retreat from the outside bustle. The commodious rooms have panoramic windows, some with fine views across the monumental skyline, while the decor is sober and understated, with framed fine-art prints and basket bedside tables.
More info 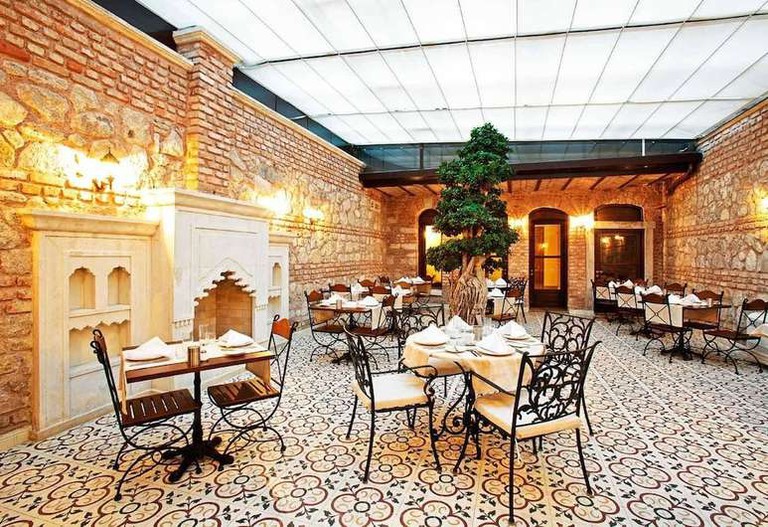 Hidden on a quiet side street that used to house the elite Peyks contingent of the Ottoman army, this boutique hotel is as traditionally Turkish as the surroundings. The converted mansion has restored an ancient tunnel linking the hotel lobby to the courtyard restaurant and bar – a covered winter garden with an old brick fireplace. The 14 rooms feature authentic Turkish furnishings such as carved wooden bedheads and tiled bathrooms. Named after the Greek moon goddess and situated only a block from the obelisks that stick out of Sultanahmet Square on the western side of the Blue Mosque, the Celine Hotel is a great affordable option. 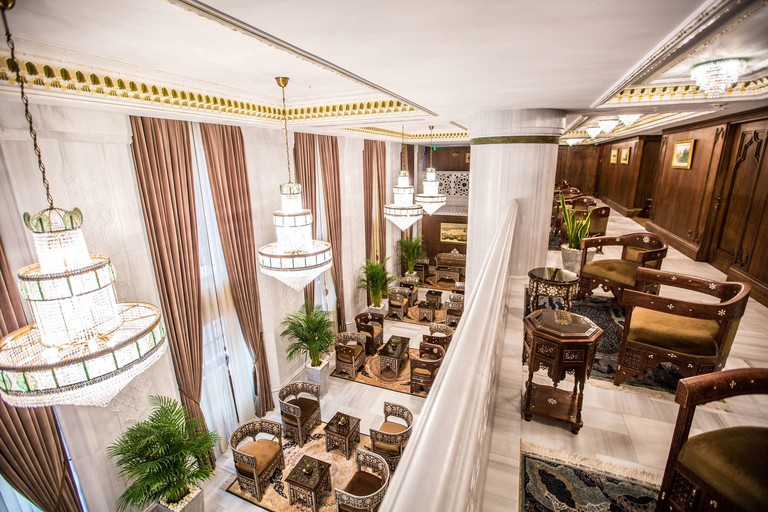 This building isn’t as old as its neighbours, but it exudes timeless luxury. Constructed in 2017, the Ajwa is a serene five-star sanctuary shielded from the bustling centre of Sultanahmet. The 61 boutique rooms have a long list of luxury features, including hand-painted ceilings, mother-of-pearl furniture, silk Tabriz carpets and marble bathrooms. For relaxation, there’s the over-the-top Afiya Spa. If you’re hungry, enjoy mouth-watering Azerbaijani meals with a view at Zeferan Restaurant. The hotel has a fleet of Bentley limousines at your beck and call, too. 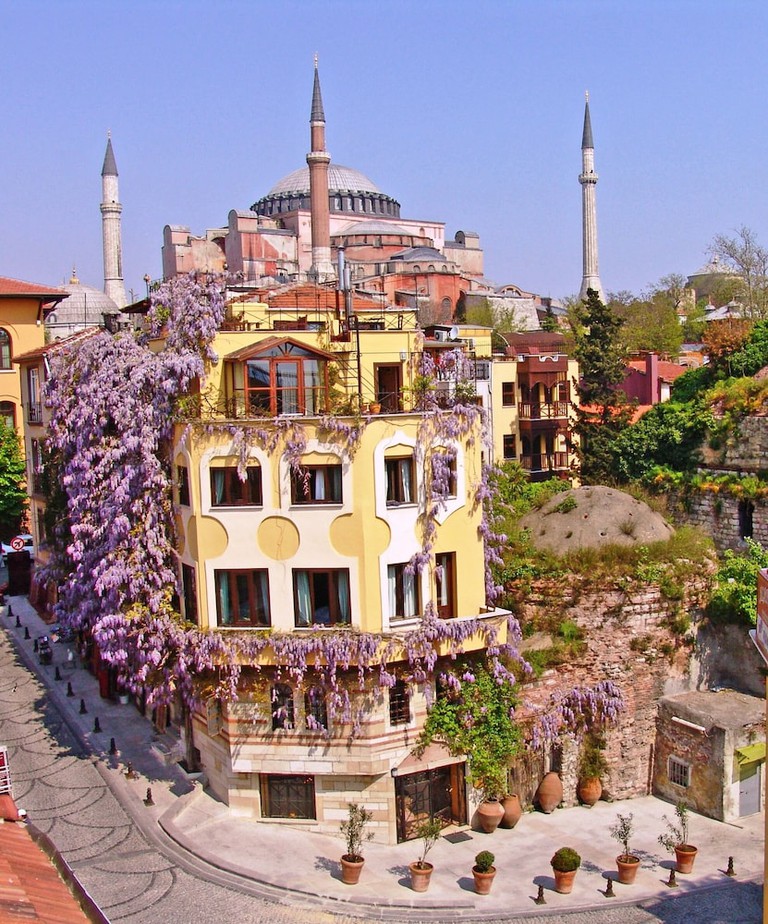 Hotel Empress Zoe isn’t just one of the best-value places to stay in Sultanahmet – it’s also among the most historic. The hotel inhabits a row of townhouses next to the ruins of an ancient hammam dating to 1483, and the traditional textiles and Islamic artworks in the guest rooms suit these time-worn surrounds. It’s also home to a lush archaeological garden in the shadow of the old Ishak Pasha bathhouse. 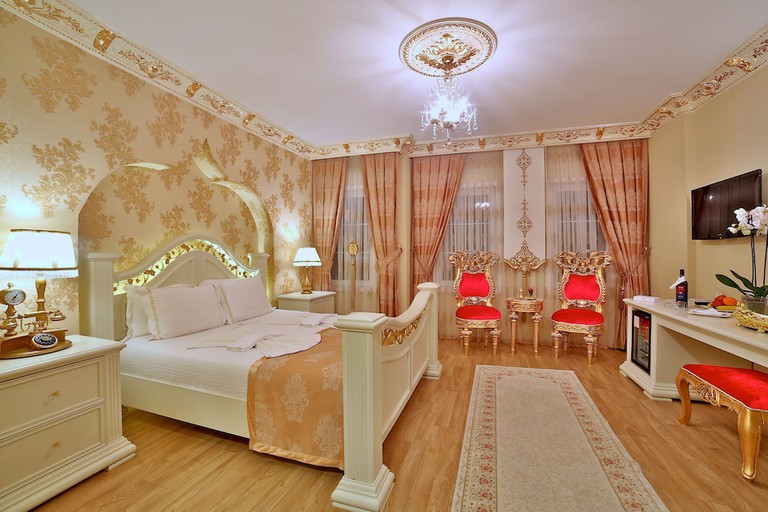 The White House is all about old-world opulence. Beyond the Romanesque pillars at the entrance, the 22 palatial rooms are decked out in golden damask curtains, velvet period furniture, petite French balconies and countless glistening shades of white. Within walking distance of the Grand Bazaar, the Blue Mosque and other landmarks, the hotel features a cosy rooftop garden that makes the most of the prime peninsula location. 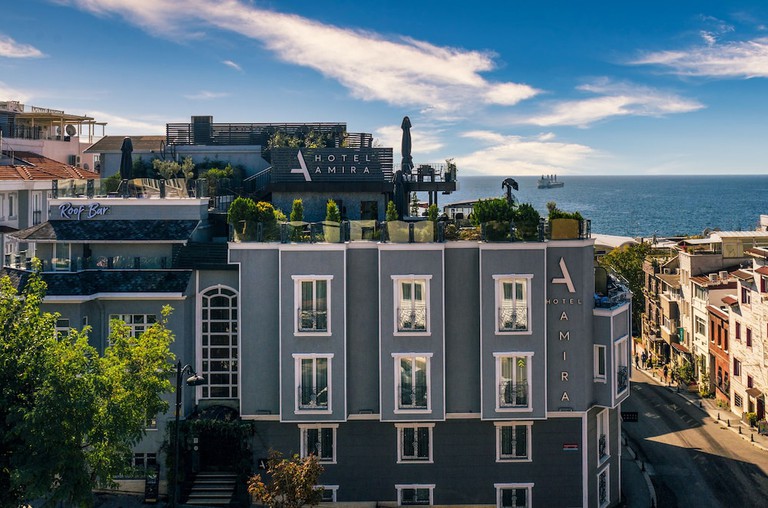 Courtesy of Hotel Amira Istanbul / Expedia.com
View Rooms
Custom-built in 2010, Hotel Amira is one of the newer places to stay on the peninsula. Not far from the Sirkeci waterfront, behind the Blue Mosque, the designer rooms feature bespoke artworks and rainfall showers, plus jacuzzis and ocean-view balconies in the suites. There is also an atmospheric rooftop terrace and a concierge service that earns rave reviews. The organic buffet breakfast serves a must-try home-made cheese gözleme. If you overindulge, you can work it off at the fitness centre, which has a sauna, hot tub and massage services.
More info 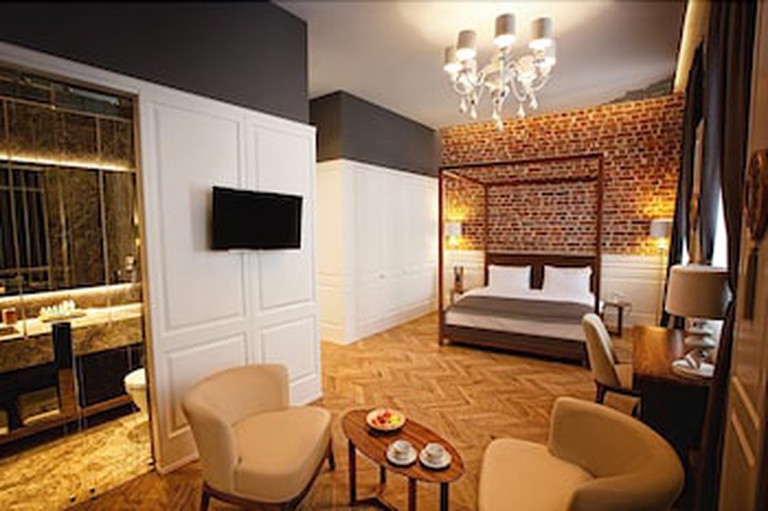 A block from the Basilica Cistern, this building has a history almost as long and winding as the neighbourhood itself. Opened in 1875 by a government agency, it served as a police station, court, school, newspaper bureau and office before being restored as a boutique hotel. It has retained original exposed-brick walls and distressed parquet floors across the rooms, but added contemporary furnishings such as a PlayStation in the suites. This property is a great pick for couples. You can treat yourself to a bottle of champagne in the spa’s whirlpool jacuzzi, sunbathe on the terrace, or tuck into the signature chocolate fondue at the glass-ceilinged top-floor restaurant.