The Best Places to Stay in Ankara, Turkey 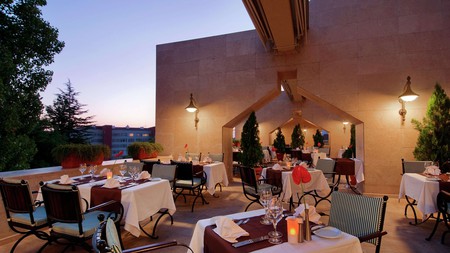 The hotels in Ankara have excellent facilities, including restaurants | Courtesy of Ankara HiltonSA / Expedia

As Turkey’s capital city, Ankara is known as the calmer and more organized bureaucratic sibling to Istanbul. For tourists, the city has plenty to do and plenty of excellent hotels to choose from. We’ve rounded up some of the best, so you can make your reservation with confidence.

Ankara, capital of Turkey and the second largest city in the country, is often overlooked by travellers not so much because of a dearth of sites but due to the glut of cultural and scenic riches elsewhere in the interior and along the coasts. Oddly the almost-central location isn’t readily conducive to even passing-through stays and the majority of visitors tend to be business and diplomatic. The hotel inventory in Ankara befits that market and of a major capital. 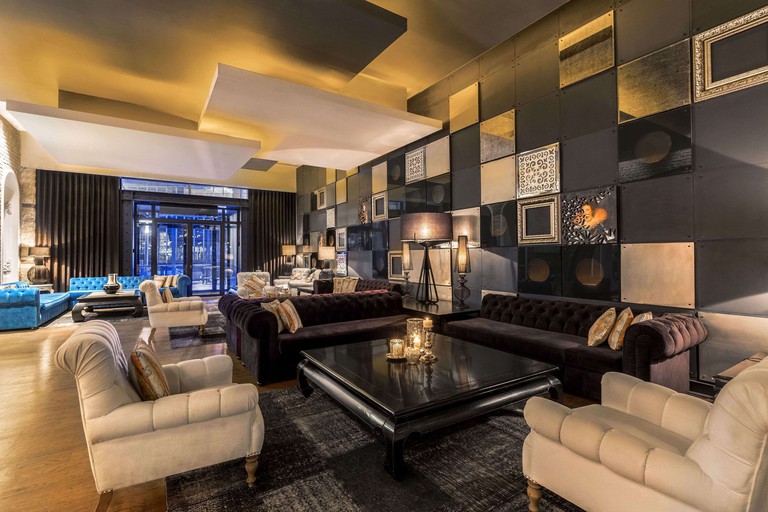 Courtesy of Wyndham Ankara / Expedia
Facing a modest park in Sogutozu, the central business district in Ankara, the Wyndham has a striking chandelier in the lobby – almost like a tubular jellyfish – suspended above a monochrome inlay floor design, underlining the swanky modern feel of the hotel. Sleek rooms have ripple-pattern carpets and pops of blue, desks, floor-to-ceiling windows and glass-wall bathrooms. Suites come with balconies. Business travellers in particular might relish downtime facilities at the indoor pool and full-service spa (which naturally includes a hammam but there’s also a barber shop) along with a full-size snooker table.
Open In Google Maps
No 4 4. Sokak, Ankara, 6530, Turkey
+903122190303
Visit Website
Give us feedback 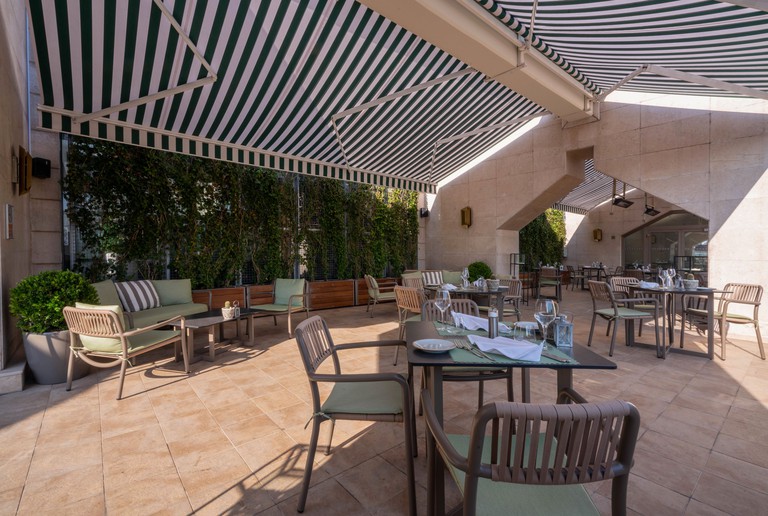 Courtesy of Ankara HiltonSA / Expedia
South of the city centre in the Çankaya neighbourhood near Kuğulu Park, this Hilton high-rise is fused to a long elevated greenhouse-like building incorporating a restaurant, lobby lounge and gym plus a 750-guest ballroom. The four-lane indoor pool features a glass roof-canopy and floor-to-ceiling windows facing a semi-circular terrace. While the big-window rooms and suites are sober and sensible, rather more interesting design percolates the public areas, from the elaborate ‘cage’ latticework in the lounge to the suspended hoop-lights in the restaurant and illuminated lobby ‘gongs’.
Open In Google Maps
No:12 Tahran Caddesi, Ankara, 6700, Turkey
+903124550000
Visit Website
Give us feedback 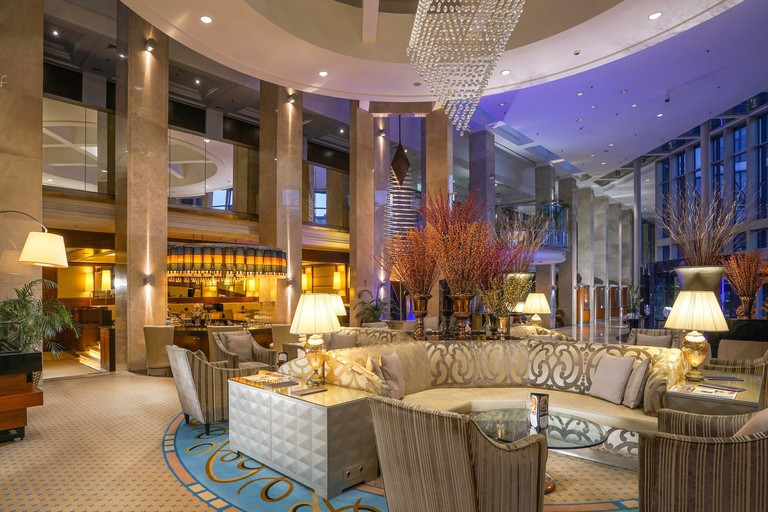 Courtesy of Sheraton Ankara Hotel and Convention Center / Expedia
Beside the cavernous Karum Mall in the Çankaya neighbourhood, the cylindrical landmark tower of the Sheraton has a cathedral-like lobby dominated by a suspended perforated ‘wheel’ faintly resembling a space rocket exhaust. As a convention centre property much of the clientele is likely to be business travellers but leisure amenities get far more than lip service. There’s a huge fitness centre and large indoor pool (both with glass canopy roofs), squash and tennis courts plus a golf simulator while the groovy jazz bar has strikingly cool curvaceous décor.
Open In Google Maps
Şehit Ömer Haluk Sipahioğlu Sokak, Ankara, 6700, Turkey
+903124576000
Visit Website
Give us feedback 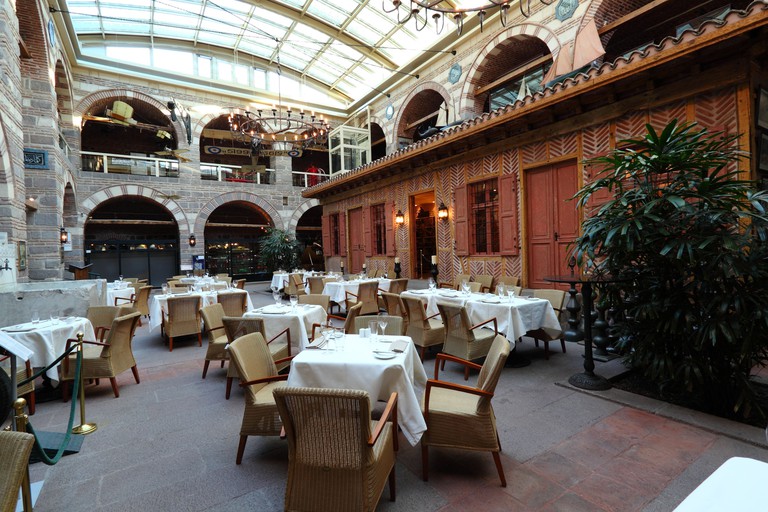 Courtesy of Divan Çukurhan / Expedia
Barely a stone’s throw from the Museum of Anatolian Civilizations, this 17th-century former caravanserai with a traditional timber frame (himis) construction has been meticulously converted into an upscale hotel. Even with a courtyard now covered with a steel-framed glass roof, its heritage fabric has been skilfully retained while incorporating modern amenities. That courtyard now features a small atmospheric lounge alongside a decorative water pool while compact yet elegant rooms are beautifully appointed with vintage-style furniture, rugs and lamps, some with portraits of Chinese Manchu nobles and Ming-style vases.
Open In Google Maps
3 Depo Sokak, Ankara, 6240, Turkey
+903123066400
Give us feedback 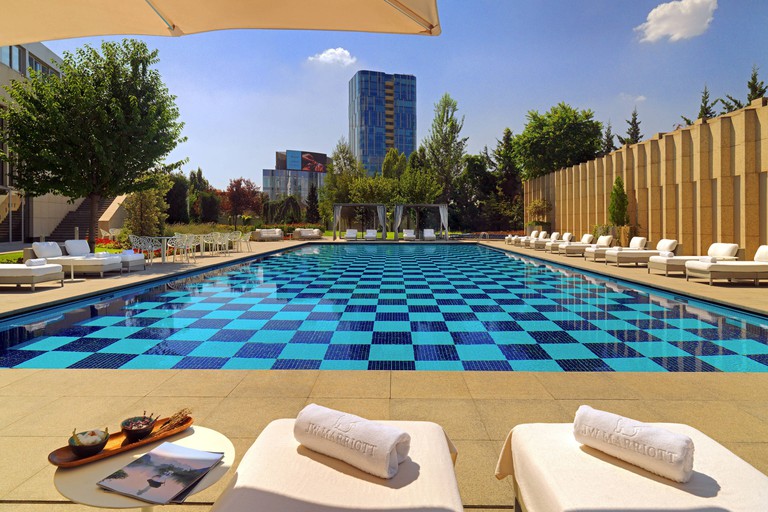 Courtesy of JW Marriott Hotel Ankara / Expedia
Soaring above Sogutozu, the central business district, the modern skyscraper of the Marriott offers the kind of aerial city views few others can match. In the lobby, trumpet-shaped chandeliers and polished marble floors and griffin statuettes herald contemporary luxury throughout, much of it tinged with Ottoman-style detail. Restaurant offerings are particularly good, from the Turkish cuisine in Fire & Flavours to a more casual steakhouse (with seafood) plus a sports bar and, crowning the lot, a 22nd-floor rooftop cocktail bar with an open terrace.
Open In Google Maps
Ankara, 6520, Turkey
+903122488888
Visit Website
Give us feedback 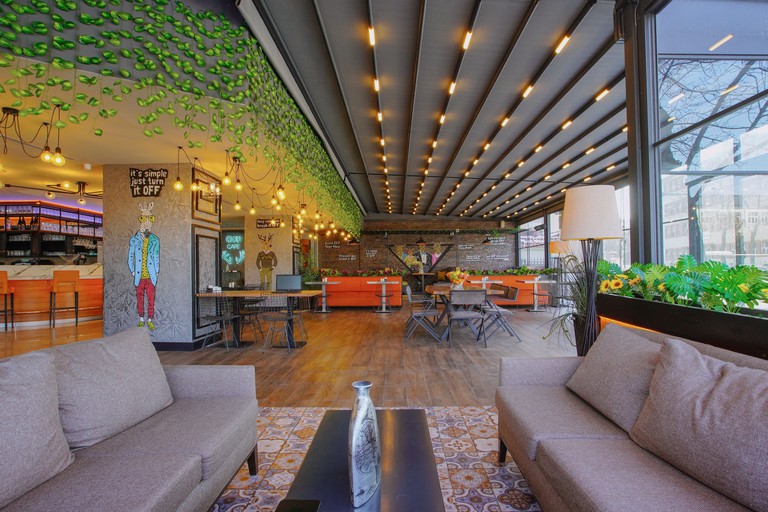 Courtesy of New Park Hotel / Expedia
Facing Kurtuluş Park in downtown Ankara, this nine-storey edifice is rather fetching at night with vertical two-tone spotlighting. The public interiors are interesting with timber detailing from floor to ceiling and a white baby grand piano in the Park Restaurant. Straightforward rooms have a modern, almost Scandinavian feel with blue armchairs and attractive olive-and-turquoise bedspreads. The Aria spa specialises in massages, from Swedish to reflexology and mechanical G5 devices.
Open In Google Maps
58 Ziya Gökalp Caddesi, Ankara, 6600, Turkey
+903124580000
Visit Website
Give us feedback 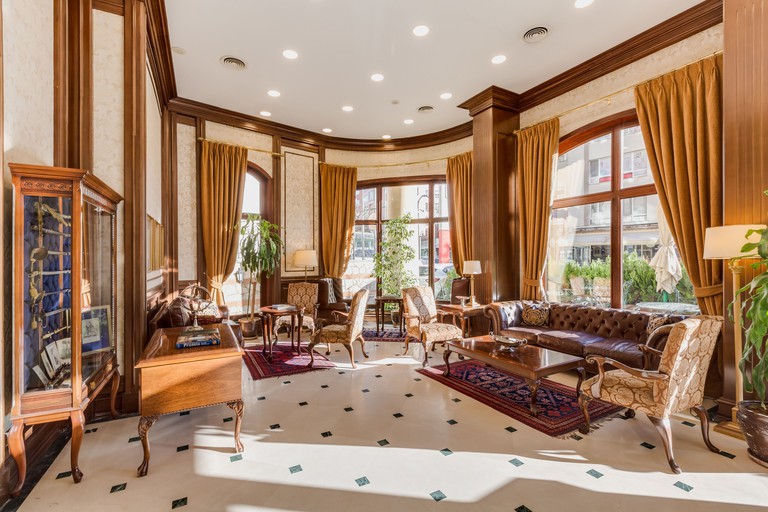 Courtesy of Gordion Hotel / Expedia
The part-brick, part-Neoclassical facade of the Gordion wouldn’t look out of place in Europe but here the thrust of the polished elegant interiors is a distinctly Ottoman-meets-European style. Vintage handmade furniture, oak panelling, Turkish Vakko textiles, Italian wallpaper, framed lithographs of nobles and sultans, and display cases of military medals lend shape, texture and colour. The conservatory restaurant seems relatively plain in comparison though even here there’s a ceiling map-mural depicting the Mediterranean region from the Black Sea to the Atlantic.
Open In Google Maps
No:59 Büklüm Sokağı, Ankara, 6660, Turkey
+903124278080
Visit Website
Give us feedback 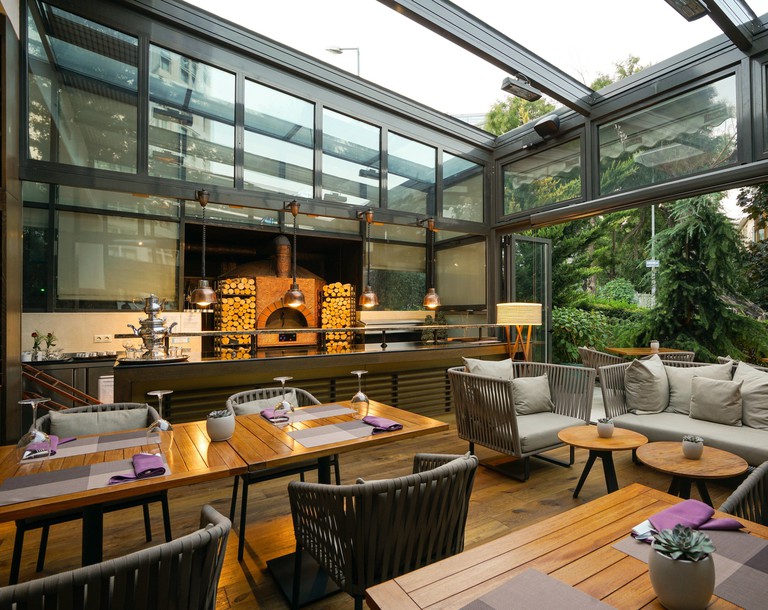 Courtesy of Lugal, a Luxury Collection Hotel, Ankara / Expedia
Near the Karum Mall in the Çankaya neighbourhood, the Lugal, with a contemporary sheen and modern rooms with floor-to-ceiling windows and natural wood furniture, lends a sleek glossy atmosphere. The highly regarded Aruni (meaning, of course, ‘dining table’ in Hittite, silly you!) restaurant features an eclectic menu of mainly Anatolian dishes, some rather obscure. Unless you’re vegetarian it’s worth making a beeline for items such as the King Midas lamb with plum sauce – much more affordable than it sounds – or goose casserole, both cooked in wood-fired ovens.
Open In Google Maps
No. 1 Şehit Ömer Haluk Sipahioğlu Sokak, Ankara, 6700, Turkey
+903124576050
Visit Website
Give us feedback
Give us feedback