Sumahan On The Water: A Historic Hotel On The Shores Of The Bosphorus

Istanbul’s Sumahan on the Water, located on the often neglected Asian shore, boasts some of the best Bosphorus views in the city, and allows guests to soak in the historic and geographical grandeur which this famous waterway offers. Istanbul’s fusion of modernity and antiquity, is clearly evoked in this historical hotel and its sister restaurant Tapasuma, both of which offer modern takes on Turkish classics.

Istanbul is a city suffused with a sense of historical significance; a meeting point of East and West which has linked continents and seas for centuries; it still bears traces of the various historical epochs which have staked a claim to the city. This historical residue is matched by geographical grandeur, as the cityscape unfolds across the precipitous twin shores of the Bosphorus, with Asia on one side and Europe on the other. Sumahan on the Water is a hotel which echoes this tangible sense of geographic and historical magnitude, whilst nevertheless offering a peaceful retreat from the bustle and commotion of the Istanbul streets. 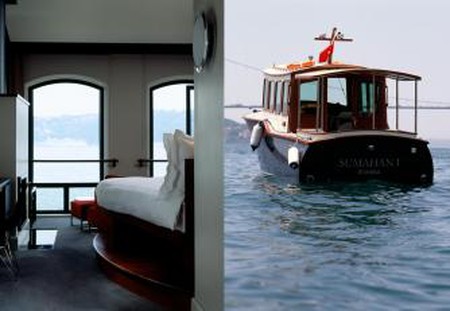 From the hotel every room looks directly down the Bosphorus towards the Sea of Marmara, through the arch of the suspension bridge and over the twin domes of the Blue Mosque and the Hagia Sophia, circled by towering minarets which blur into the distant haze. The call to prayer can be heard floating over the tide from every corner of the city, whilst boats of various description pass through this ancient shipping channel, as they have done for centuries. The view is one to savor and the hotel provides amply, with every bed and sofa facing capacious double windows. Binoculars are also provided so that guests can study the palaces and people which line the distant shore. From this vantage point the sensation of straddling two continents is palpable, as is the beguiling blur of antiquity and modernity which this city offers. 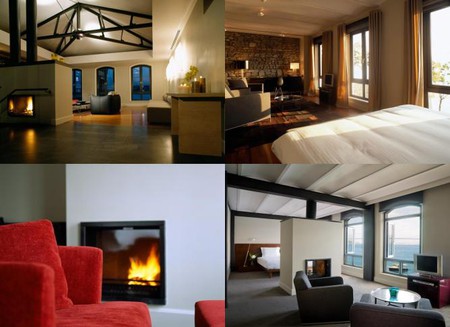 Beyond the stratospheric view, Sumahan on the Water offers guests a haven of serenity and peace which is otherwise hard to attain in such a bustling and vibrant city. Its riverside location allows guests to relax on the shores of the Bosphorus in complete comfort and seclusion, either in their rooms or on the riverside terrace. The obligatory Hammam also grants guests a luxurious take on the traditional Turkish bathing and massage experience. 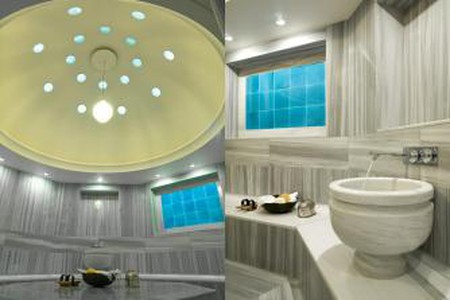 The hotel is located in the Çengelköy area of Istanbul, a largely residential village which retains a sense of tradition and history thanks to its wood panelled houses, shore front fish restaurants and tea gardens. A quiet walk along the Bosphorous or a stroll through the surrounding hills offers a picture of suburban Istanbul life as it was lived in the time of the Ottoman Empire, if you ignore the always present hum of traffic.

Sumahan’s particular location is due to the building’s original use as a distillery. It was built in the mid nineteenth century to distil ‘suma’, a fig spirit alcohol used to make Raki; the aniseed flavoured tipple beloved by the Ottomans and still drunk throughout Turkey in massive quantities. Sumahan’s past is referenced in the architecture of the rooms in which the stark ultra-modern fireplaces, exposed stonework, bare brick, steel joists and mezzanine floors evoke the factory equipment which once occupied the building.

Sumahan’s riverside location was perfect for this venture, as the barges carrying the figs, which went into Raki production, would ferry their cargo from vineyards on the shores of the Marmara Sea before departing laden with the alcohol itself. These barges have now been replaced by a private boat that ferries the hotel’s guests to and from the centre of Istanbul, crossing the Bosphorus and coming tantalizing close to the Dolmabahçe Palace and other historical sites along the shores. 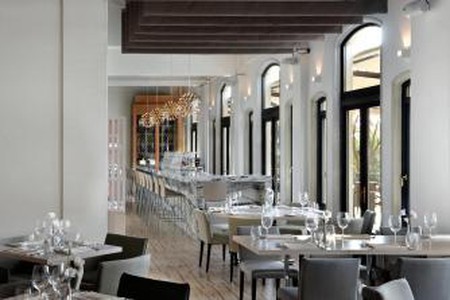 The hotel’s adjoining restaurant features the same mixture of the ultra-modern and the distinctively traditional through a menu that brings the age old Turkish tradition of Meze into the 21st century. The innovative menu incorporates the flavors and textures of Meze whilst evoking the elegance and refinement of Japanese Sushi and the communal feeling of Spanish Tapas. It also features the freshest seafood sourced from the local area, and adds inventive fusion elements into the traditional Meze components. The cold ‘tapa’ on offer include ‘Trout Filled with Herbs, Pine Nuts, Currants and Curd Cheese’ and ‘Fresh Anchovy in Tomato and Pepper Sauce’, whilst hot tapa include a ‘‘Borek’ Satay with Anchovy Dill Crème Fraîche’ and a ‘Calamari Satay with Olives and Thyme’. Each is only a couple of mouthfuls but together they constitute a uniquely delectable and refined take on Turkish traditions. The main courses include a modern take on the classic Turkish kebab, featuring ‘a Grilled Thyme-marinated Meat Ball, Strips of Lamb Loin & Chicken Leg with Crispy Matchstick Potatoes’ whilst other dishes incorporate Greek and even Italian flavors and cooking techniques for a truly Mediterranean dining experience. 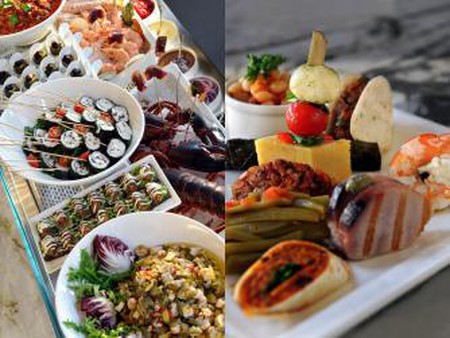 Tapasuma takes its name from the Turkish word Tapa, which means to cap a bottle with a cork or glass stopper and Suma, the refined alcohol which was once distilled in the premises. The restaurant lives up to its name by offering a range of Raki options as well as a full menu of Turkish wines, including Chardonnays and Merlot-Sevilens, which suggest that Turkish wine is a yet to be discovered gem.

Tapasuma, like Sumahan on the Water, prides itself on its location on the shores of the Bosphorus and features alfresco dining throughout the year. Both the hotel and the restaurant provide immaculate service and focus their attentions on creating a relaxed and refined atmosphere. The most beguiling feature of Sumahan, however, remains the view across the water which, night and day, allows guests to soak up the atmosphere of the magnificent glittering Bosphorus as it glides past their windows.

© Sumahan on the Water
Give us feedback