On the Trail of Turkish Literature's Greats in Istanbul 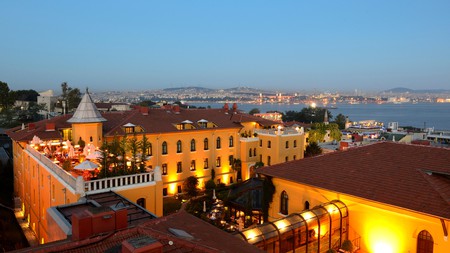 In many cities, the former homes and workspaces of cultural giants are marked with plaques. Not so for the literary heavyweights of Istanbul, whose works have often been met with official disapproval. Here, local author Kaya Genç leads us on an Istanbul literary pilgrimage that is an act of celebration, curiosity and defiance.

Travel books on Istanbul abounds with descriptions of basilicas, bazaars and palaces – but pay little attention to the cities literary significance. The fact Istanbul doesn’t commemorate its great writers with plaques is one reason literary Istanbul is left out of the travel guides. Readers must become relentless explorers to locate the writing dens of authors whose works are now considered classics of world literature: Orhan Pamuk, Sabahattin Ali and others.

Taksim, once home to Turkey’s greatest 20th century novelist Ahmet Hamdi Tanpınar, remains literary Istanbul’s beating heart. Nişantaşı, the neighbourhood which accommodates Orhan Pamuk’s fictional hero Galip in The Black Book (1990), is a half-hour walk away. Moda, home to many avant-gardists including Motherland Hotel (1973) author Yusuf Atılgan, is on the city’s Asian side, reachable by ferry.

For bookworms, exploring Istanbul via literature is an experiment in psychogeography. Wandering its quarters hints at how Istanbul shaped its authors and vice versa. But it’s a challenging venture. Istanbul’s historic buildings exist hidden from view, enjoy little funding from charitable bodies and face destruction in an era of rampant gentrification.

Authoritarianism plays a key role in this erasure. Since its founding in 1923 the republic of Turkey prosecuted its writers and poets, fearing their strong hold on readers. From Mustafa Kemal Atatürk to Recep Tayyip Erdoğan, suspicion of writers remained constant and countless. Many Turkish classics were penned in prisons, including Nazım Hikmet’s epic poem Human Landscapes from My Country (1938) and Sevgi Soysal’s award-winning novel Tante Rosa (1968).

Writer Milan Kundera once proclaimed, “The struggle of man against power is the struggle of memory against forgetting.” Today, unearthing Istanbul’s literary heritage remains as necessary as ever, while the fight for city preservation and the vendetta of the government against Turkish writers have both strengthened. Currently 47 writers serve time in Turkish jails, including the famed novelist Ahmet Altan, author of I Will Never See the World Again (2018), and Kurdish politician Selahattin Demirtaş, whose story collection Dawn was written in his cell and became a national bestseller in 2017.

A stroll in search of Turkey’s literary giants is therefore an act of defiance, a silent challenge to authoritarians who would prefer we forgot a culture rich with wit and dissent.

In Narmanlı Han, just opposite the Şişhane subway entrance, Ahmet Hamdi Tanpınar lived and wrote A Mind at Peace (1949), “The greatest novel ever written about Istanbul,” according to Orhan Pamuk. Attempts to transform his studio into a literature museum came to nothing and a convenience shop occupies its entrance today.

Tanpınar had little money and used newspapers as curtains for his studio, which featured a large room, a kitchen, a lavatory and overlooked the courtyard. When he wasn’t chronicling Istanbul’s life on the eve of World War II, Tanpınar entertained friends. An adjacent apartment served as headquarters of the world’s oldest Armenian newspaper, Jamanak.

Narmanlı was left in a dilapidated state in the 1980s, however, it was recently restored and reopened. Purple panicles growing in its courtyard were gone, but architects rebuilt Narmanlı’s marble fountain. Nowadays smokers perching on Starbucks chairs enjoy its beauty.

Oğuz Atay is the greatest Turkish novelist you’ve never heard of. His The Disconnected (1972), recently published in English, is a doorstopper that surveys the dilemmas of various Turkish intellectuals. Pamuk compared it to James Joyce’s Ulysses (1922). The Disconnected awaits wider attention in the West. A professor at a civil engineering faculty, Atay wrote his epic on a typewriter at home after work. His partner Sevin, sitting next to him, rendered his pages into English in real time. You can find it on Hayriye Caddesi, a street linking Galatasaray Square with Pamuk’s Museum of Innocence in Tophane. In 1968 Atay and Sevin broke up and she relocated in London. Atay rented another apartment on the nearby Yeniçarşı Caddesi where he wrote his next book Tehlikeli Oyunlar (1973) on the fourth floor of Bereket Apartmanı (no.52).

Mehmet Akif Ersoy, the Muslim poet who was nonetheless experimental as a writer, lived in Mısır Apartmanı. Ersoy’s collected poems Safahat (1911-1933) comprises around 10,000 verses and seven books. In 1921 he authored Turkey’s national anthem and later moved to Egypt where he rendered a Turkish translation of the Quran.

The Art Nouveau building, that Akif lived in after returning to Turkey, was built in 1910 by the architect Hovsep Aznavour. Located next to a Catholic church, Mısır Apartmanı’s rooftop now hosts 360 Istanbul – a self-described ‘contemporary penthouse restaurant’. Art galleries populate other floors.

The stroll from Mısır Apartmanı to Nişantaşı takes about 40 minutes, but the effort pays off. On the way you’ll pass Gezi, the park that inspired millions to march against authoritarianism in 2013. You’ll soon reach the Pamuk Apartment, the old home of Turkey’s Nobel laureate. Pamuk wrote parts of his masterpiece The Black Book there. His protagonist Galip inhabited the apartment’s top floor, surveilling streets and trawling archives to locate his lost wife Rüya.

“My mother, my father, my older brother, my father’s mother, my uncles and my aunts — we all lived on different floors of the same five-story apartment house,” Pamuk wrote in Istanbul: Memories and the City (2003). “Until the year before I was born, the different branches of the family had (like so many large Ottoman families) lived together in a large stone mansion. In 1951, they rented it out to a private elementary school and built the modern structure that became our home on the empty lot next door; on the facade, in keeping with the custom of the time, they proudly put up a plaque that said ‘Pamuk Apt.’ We lived on the fourth floor, but I had the run of the entire building from the time I was old enough to climb off my mother’s lap. On each floor, there was at least one piano.”

Comedic writer Aziz Nesin and poet Nâzım Hikmet lived and worked at this building, albeit involuntarily. Built in 1918 in the neoclassical style, Capital City Murder Jail was Istanbul’s first prison house, incarcerating numerous writers in the 20th century. Located near a courthouse prison on Tevkifhane Sokak, it closed in 1969 and was transformed into a Four Seasons Hotel in 1997.

Sabahattin Ali wrote his heartbreaking novella inside a tent pitched at a military zone on this avenue. Madonna in a Fur Coat (1943) was serialised between December 1940 and February 1941 while Ali undertook military service under circumstances which could hardly be more adverse. The wrist of his right hand was fractured. Ali had to rest it in heated water while rushing chapters to printers. But even his steadfastness failed to defeat the Turkish government’s hatred for writers: Ali was assassinated by an intelligence officer eight years later.