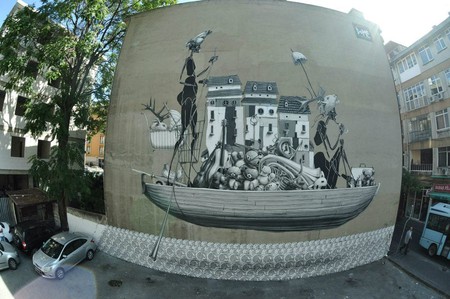 Organized through the support of the Kadıköy Municipality and ÇEKÜL (Foundation for the Protection and Promotion of Environmental and Cultural Values), Mural Istanbul is one of the city’s most prominent street art festivals. Bringing in amazing street artists from abroad to painted building-sized murals, the Yeldeğirmeni neighborhood has been turned into an open-air museum since the festival’s inception in 2012. We took a look at the festival and some of its best murals so far.

The founders of Mural Istanbul saw a lot of empty walls in their neighborhood and the idea of covering them in art was only a natural impulse. When they presented their idea to the Kadıköy Municipality (which happens to be quite cool), their support was immediate and long lasting. Choosing artists according to their style, the festival has already brought in the likes of Pixel Pancho, INTI, JAZ, Dome, Tabone, Ares Badsector, and CHU to cover the side of whole buildings with striking (and very large) art. One of the most surprising things is that the people of Kadıköy support the art because it brings a whole lot of color to their lives.

One of the other aims of the festival was also to foster local talent and to bring them together with international artists and their various techniques and methods. Inspired by their international counterparts, Turkish artists such as Lakormis, WICX, Esk Reyn, Furkan ‘Nuka’ Birgün, and Canavar went from doing small-scale street art to murals as large and stunning as the festival’s special guests. As for the technique for such huge murals, the whole process takes around five days to complete and includes the use of aerial lifts in order to cover the very large canvases. Sketches are also sent in before the artists make their way to Istanbul so that the dimensions of the wall match their aesthetic plans.

Thanks to the Mural Istanbul Festival, Istanbul has become a city known for its street art, featured in popular media outlets such as Street Art News and MTN-World. This year, the festival was held between August 17 and September 7 and featured artists Chu (Argentina), Ares Badesector (Turkey), Tabone (Turkey), Lakormis (Turkey), and The Writer Material (Turkey). Featured by Street Art News, this year’s standout was the mural of Ares Badsector, a gorgeous monochrome dream of human portraits intertwined with leaves and flowers blowing on an invisible wind. His largest work to date, the artist wanted to reflect on how and where people live and their daily routines with the mural’s many eyes seemingly staring into the row of (actual) windows in between them.