The boundaries of video art, and its creative and expressive potential, are still very much in flux. Arie Amaya-Akkermans surveys these boundaries, and describes how the video installations of Turkish artist Uygar Demoğlu contest with ideas of the contemporary in modern art. 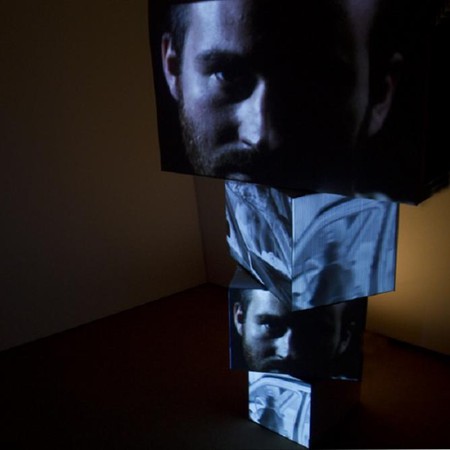 In the introduction of a now classic textbook on video-art, Iranian artist Shirin Neshat writes back in 2005 that the biggest development since the appearance of video-art, has been that ‘artists are finally relieved of the task of making ‘objects’, and can now conceive their ideas in a way that becomes experiential…’ Neshat adds recollections from her personal experience with this kind of art: ‘I remember the first time I experienced the work of Bill Viola: I was mesmerized by how he managed to remain faithful to the vocabulary of visual arts, as his installations became painterly and sculptural, yet retain the magic, the intangibility and the transparency, of the moving image.’

It was a day in 1958, when German artist Wolf Vostell incorporated for the first time (in the history of art) a television set into a complex multimedia work titled Black Room Cycle, and his subsequent Transmigration — an oil painting in décollage, out of which, through a slash in the canvas, a TV set plays a bad signal from a UHF channel. That is when apparently video-art was born. What captivates in the case of Vostell is precisely the fact that he was a painter and sculptor. Though his work was an early example of inter-media and the famous ‘happenings’, he remained something of social realist. His realism—sometimes expressionist and sometimes pop—dealt primarily with capitalism and war.

What is often forgotten by contemporary video artists is that being relieved from the task of making objects is not meant to simplify the production of art; rather, it is meant to amplify the possibilities of expression into heterogeneous fields—learning how to see different things at the same time. And no doubt the relationship between painting and video-art is extremely complex: Although painting has not been discarded and perhaps never will be—one would hope—the moving image is part not only of the social and technical history of images, but also of the history of aesthetics and art. The problem lies in the fact that moving images as such cannot be so easily historicized and talked about. 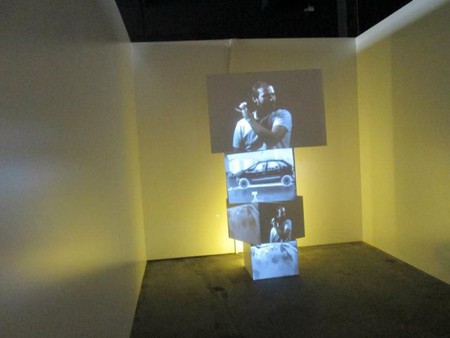 Nevertheless video-art comes with a palette of its own. And I would think that what truly is perplexing about video as an art form isn’t its narrative capabilities but that uncanny territory in which situations unfold as (human) conditions, conditioned by this new lexicon of the eye. Maya Deren insisted that the narrative plot of films was inherited from literature and underestimates the verticality of this new format. When I was a teenager, the local museum was always available with Pisarro, Picasso, Mondrian and Renoir, but it wasn’t until I saw a modest video-installation by the Swiss–Colombian artist Rolf Abderhalden that I decided I wanted to work with art one day.

There were two parallel screens in which one man, perhaps a soldier—standing on something like a desert—is very slowly throwing things at the man in the other screen. I was paralyzed. I didn’t know what it was all about, or how I was supposed to call this art but I did know it had transformed my eyes internally. Something similar happened many years later—and actually last week—when I walked into the Mamut Art Project in Istanbul and experienced Uygar Demoğlu’s Portrem (Untitled self-portrait), a six-channel video-installation, alone occupying a booth in the young artists’ project conceived in the format of an art fair.

The six channels, almost resembling light-boxes, face the viewer obliquely and on closer inspection, they do not actually reveal a scripted plot or a re-arrangement of footage obtained in documentary fashion and re-enacted. Demoğlu is here not a story-teller but a painter, for whom the powerlessness of life—life as a weak power—is staged as a grand performance, fraught with risk and uncertainty, in which chaos and disaster are omnipresent and the eye cannot travel fast enough to assimilate change and movement at all, so that his installation has to cut out chunks of reality and re-assemble them in a different temporal sequence. This is what is most unsettling.

Video is here a fourth wall or dimension. The different coalescent planes interrupt the natural anatomy of spatial continuity and break off from the spatiality of memory as well, setting free different forces of cognition and recognition that are sometimes erotic, sometimes violent, sometimes indifferent, yet never continuous. His untitled self-portrait is a gaze, a gaze into the unique landscape of dream and night, fantasy and reality, chaos and ecstasy, that are meant to invade a painting but that exist only as suspended presences. Demoğlu’s discursive order is optical but not transparent; it is a navigation map to get lost inside the stage of his fourth wall.

The artist is permitting the viewer to intervene in his night world and become part of what he would see, had he chosen to paint a self-portrait. It is both terrifying and intimate. Fernando Pessoa writes in The Book of Disquiet: ‘Man should never see himself in a mirror. Nothing could be more terrible. Nature endowed him with the gift of not being able to see his own face, and to not being able to look into his own eyes. Only in the waters of the rivers and the lakes, may he contemplate himself. The posture he had to adopt was very symbolic: He had to kneel down, to bend, to indulge in the ignominy of his own sight.’ It is impossible to experience this self-portrait without ignominy as well.

However risk, the risk to which one is so mercilessly exposed in this work, is not an objective phenomenon but a reflection. The contemporary anxiety over the future is perhaps symptomatic of the disappearance of the future as such: In the middle ages the future was determined and closed to human intervention, but the notion of risk, born in the 17th century with the colonization of the future brought about by global capitalism made us stop depending on notions such as fate and luck. Risk arose as a rational, calculated response to the uncertainties of the future. Risk isn’t an experience, but an attempted quantification of the risk possible and available in reality.

New media—not only video but also the Internet and mobile phones—have overcome the separation between space and time, by dis-embedding or removing events and situations from the local time frame. In the words of Gerda Reith: ‘The organization of time and space in a way that connects presence and absence.’ This has in practice de-articulated the future and incorporated it into the endless and rather homogeneous extension of the present. As such, risk becomes a temporal orientation towards a time already collapsed. Colonization of the future meant always its openness to human agency and the vertigo of an infinite (and infinitely contingent) universe. 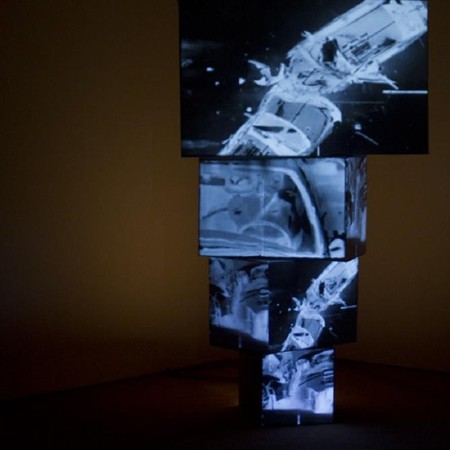 And video artworks such as Demoğlu’s, confront us always with the question of what really is the contemporary in art? For example, will once contemporary art be another period of art history replaced by something else? By what? In surveying contemporary art after post-war and postmodern, Dan Karlholm argues that the contemporary perhaps can never be written into history. Further than that, I would think that insofar as the moving image is a reality, that is, a construction out of a specific and live social reality, it is impossible to consider it in another tense than the present, even if the work is question is fictional or re-fictionalized.

This untitled self-portrait will continue to open before us as a paradox, invade us with questions, sometimes eroticize, sometimes slumber, sometimes awake. Most of the works you find in art fairs today are but effective as consumption items, commissioned by markets and sometimes even by willful participation in their tastes. And it is only sometimes that you find artworks that were created perhaps not to be shown, perhaps accidentally wounding both the viewer and the maker. Then you actually remember that it is art and artists who shape what is to be called art or not. And it is good to remember that too, because this is what artworks are meant to do: Transform you, even if just for a second.

Uygar Demoğlu’s installation was perhaps construed as a series of semantic accidents, and the experience albeit consuming, is never total. The inventory of digital images has already by far surpassed the inventory of printed images since Gutenberg, and this isn’t because we tend to see more, but because we remember less, and are in need to be reminded constantly of our featherweight existence. Those moments of clarity are rare, and all the more confusing. Standing across the untitled self-portrait made me think of Pessoa again: ‘I feel as I’m always on the verge of waking up.’