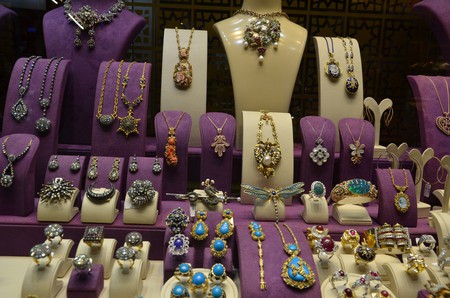 As one of the world’s largest covered markets, the Grand Bazaar is an intimidating experience for a first timer. However, hidden amongst its thousands of stores, the bazaar’s master craftsmen continue to practice their arts. Check out some of the last craftsmen who specialize in jewelry.

In a time when items are produced en masse for low prices, it’s difficult to maintain appreciation for a tradition that necessitates patience, training, and an eye for the meticulous. The jewelry craftsmen have been part of the Grand Bazaar for more than 500 years, yet only a few remain and continue to practice their art, often without apprentices who want to learn and continue their craft.

One of the Grand Bazaar’s most well-known jewelry makers is the award-winning Sevan Bıçakçı. He has become famous for his rings, which are basically tiny wearable sculptures. The magic of his designs are partly due to a team of talented craftsmen who perform tasks, from stone cutting and glazing to painting, as well as calligraphy and sculpture.

Another important name in the Grand Bazaar is Berç Melikyan, who began his career at the age of 14, quickly discovering a great talent for jewelry ornamentation. After working as an apprentice, Melikyan became a master himself, and has been working in the Grand Bazaar since 1981. Much like Melikyan, Surmak Susmak also started as an apprentice at the age of 12, and by 1980 opened his own atelier, where he creates jewelry from beginning to end. Hraç Arslanyan is another craftsman who is especially notable because of his workshop that aims to educated future generations, especially female apprentices, who play an important role in changing an art form that has been largely dominated by men for centuries. Arslanyan is known for an original style that brings together his upbringing and experience in Turkey with the techniques he witnessed whilst visiting workshops in Europe.

Last but certainly not least is Avedis Kendir, whose pieces really stand out due to their Art Deco and Art Nouveau influences, as well as their Victorian and Ottoman aesthetics. Often admired and worn by royalty and heads of state, there’s definitely something majestic about Kendir’s designs. Having opened his first store in 1983, Kendir has been in the jewelry business since he was eight years old, when he worked as an apprentice during his school breaks. Nowadays he has around 25 talented craftsmen who bring his designs to life. Apart from his exclusive boutique in the luxurious Çırağan Kempinski Hotel, Kendir’s stunning designs can also be found in many boutiques around the world.