How Turkey's Classical And Folk Music Continues To Survive

Popular music genres dominate the market in Turkey, but there is also a considerable audience for traditional genres among the Turkish population. Thanks to the efforts and outputs of contemporary musicians, the country’s folk and classical music has continued to thrive into the 21st century.

Along with Western classical music and Indian music, Turkish classical music is one of the oldest traditional genres still in existence, with its roots dating back to the 9th century. In the Ottoman court, it was cultivated as chamber music among the urban elite. The word ‘Turkish’ was given to the genre after the collapse of the Ottoman Empire and the foundation of the Turkish Republic in 1923. However, musicians from Greek, Armenian, Persian, Arab and Jewish ethnic groups were also part of the Ottoman Empire, and contributed to this music significantly.

The traditional instruments include oud (plucked short-necked unfretted lute), tanbur (the long-necked tanbur lute), ney (long-necked end-blown flute), kanun (plucked zither), tef (frame drum), the darbuka (a goblet-shaped drum) and kemençe (bowed fiddle). Tonal systems called makams were used, which have stringent rules and dictate melodic development. The art of taksim (musical improvisation) is also essential. During the modern period after the foundation of the Republic, this traditional music went through some changes and was influenced by Western genres. It started to be called Turkish Art Music, which is the common name today. Religion, war and love are the main themes in the songs. The language is formal and contains lots of Persian and Arabic words.

One of the most important musicians of the contemporary period in Turkish Art Music is Münir Nurettin Selçuk, who established himself as the most popular singer in Turkish music. Other important musicians include Selahattin Pınar, Zeki Müren, Müzeyyen Senar, Safiye Ayla, Zekai Tunca and Bülent Ersoy. Pop singers such as Tarkan, Sezen Aksu and Sertab Erener also play their part in interpreting Turkish Classical Music songs. People also enjoy this genre within the meyhane; a modern tavern culture where an ensemble performs classical music live and interacts with the crowd. Recently, teenagers and young adults have been following this meyhane trend, whereas the elderly continue to listen to this music mainly at home, in front of their TV. TRT 4, a national channel, broadcasts recordings of old and recent concerts and performances. Turkish Classical Music is also taught in conservatories as well as in social clubs. 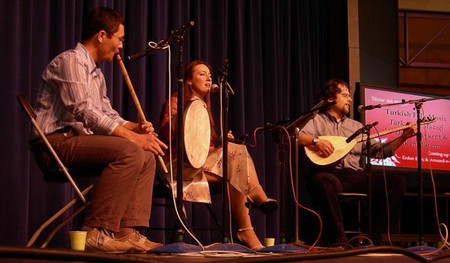 Unlike Turkish classical music, which emerged and developed in an urban elite environment, folk music was a social product of people’s daily lives, combining the distinct cultural values of all civilizations that have lived in Anatolia. All the natural and social events experienced by the people are its subject, and are reflected in the variety in the musical forms, instruments, performers, and their social status. Folk songs always have a story behind them; be it a mother crying after her son is lost in the war, a lover in prison or a newly-wed couple fearing separation. They can have a very happy or a very sad tune. Usually, the accent gives away the origin of the song.

Two main sources nourish Turkish folk music; Türkü singers and aşıks. Türkü singers perform the songs in all sorts of celebrations, special rituals, religious gatherings and funerals throughout Anatolia. As they sing over and over, they contribute different words and create new songs. In time, the musical patterns as well as the lyrics become anonymous. Aşıks, on the other hand, mostly create music with their own lyrics. Usually their names are mentioned in the lyrics, and their songs don’t become anonymous. They play the saz, a type of lute, and semi-improvise around common forms. Most well-known aşıks are Karacaoğlan, Dadaloğlu, Köroğlu, Aşık Veysel, and more recently Neşet Ertaş, who passed away in September 2012. Other very important names in folk music inlude Erkan Oğur and Arif Sağ.

Watch this short clip on ‘From the world since I came to lie’ – Composer and Singer: Hasan Yüksel:

Turkish Folk Music is also taught in conservatories and social clubs, and ‘Türkü bars’ offer opportunities to enjoy this music. Young musicians record albums in the genre. There are also innovative musicians who interpret folk songs in different genres. Siblings Öykü and Berk Gürman released two successful albums, in which they blend Anatolian folk songs with flamenco. Furthermore, Önder Focan and Jülide Özçelik are two important musicians who interpreted folk songs in a jazz context. Folk songs are also recurring elements in films serving to recall local memories in urban areas, to emphasize loneliness or to express an urge for home. For example, director Yavuz Turgul is very fond of folk songs and dedicates significant screen time to them.

Although recent popular genres might overshadow classical and folk music, there is a growing interest in Turkey for these traditional genres. There is even a song contest which is the equivalent of X Factor in the UK, or American Idol in the US, where these two genres are performed. While enjoying modern trends in music, the Turkish population doesn’t seem eager to abandon its cultural values and traditions.