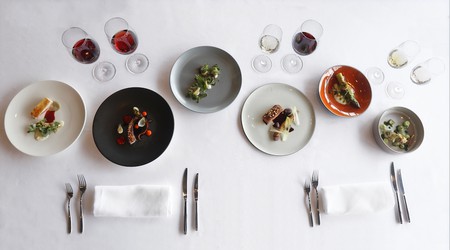 Istanbul’s culinary scene is full of gastronomic prosperity that ranges from the classic to the highly reinterpreted. Like their male counterparts, Istanbul’s female chefs have also made their lasting mark with their own establishments and creative endeavors that have changed the city’s restaurant scene forever. Here is a look at the best female chefs in Istanbul.

The founder and executive chef of Nicole Restaurant, Aylin Yazıcıoğlu was working as a researcher at Cambridge University in Social History when she decided to set out on a completely different path. Inspired by her love for cooking, she soon found herself in Paris where she enrolled at the renowned Le Cordon Bleu culinary school. After working at Michelin-starred restaurants in Paris and amassing valuable experience, the chef returned to Istanbul in 2013 and opened Nicole, one of the city’s best haute cuisine restaurants that features a seasonally inspired and altered tasting menu composed of Turkish ingredients and French techniques. Every meal at Nicole is always a journey for the senses, and Yazıcıoğlu’s desserts are especially euphoric in all senses of the word.

Founder and chef of 9 Ece Aksoy, Ece Aksoy has more than 35 years of experience, having observed Istanbul’s cultural and culinary growth first hand. After having opened a bar in 1984, Aksoy found her true calling while cooking homemade meals for the late-night drinkers in her establishment. These dishes with a homey feel and healthy ingredients soon took on a life of their own, as Aksoy went on to open a restaurant, first in Kuruçeşme and then in Beyoğlu, named 9 Ece Aksoy. Always on the lookout for the best ingredients, Aksoy is not a stranger to traveling around Turkey to find exactly what she’s looking for – that one ingredient that will make the perfect dish.

The executive chef and kitchen manager at Lucca and Cantinery, Pelin Çakar didn’t initially enter the kitchen as she was doing a master’s in marketing at UC Berkeley. It was only when she began to do catering for small events and also cooking Turkish dishes for school functions that she began to get an inkling for her true purpose. During one of the holidays, Çakar had the chance to meet the owner of Lucca who was looking for a talented new chef, and after tasting her eight-course tasting menu, her new job was set. Since then, the young chef has traveled as far as Thailand for new menu ideas and is very busy managing the menus of two of Istanbul’s coolest restaurants.

As the founder and executive chef of Kantin, Şemsa Denizsel knows a whole lot about Istanbul cuisine. Born and raised in Istanbul, Denizsel has been cooking the dishes she knows best for more than 14 years, and her success cannot be overlooked judging by the popularity of Kantin. Seasonal, organic, and local, Denizsel believes that it’s the ingredients that determine the taste of a dish, even running her own farm in Ayvalık. Having begun its life as a small restaurant and shop in Nişantaşı, Kantin recently moved to a larger venue in the Milli Reasürans Passage where she serves daily made dishes and baked goods in the shop as well as the restaurant.