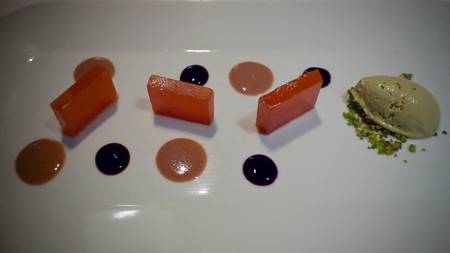 Even though Istanbul’s top restaurants have not yet been bestowed with any Michelin stars, there are more than a few chefs whose culinary creations deserve to be awarded. Reinterpreting the Turkish and Anatolian kitchens, these four chefs have elevated Istanbul’s food culture with striking menus and venues that always require reservations in advance.

Restaurant, Turkish
Facebook
Email
Twitter
Pinterest
Copy link
Share
Map View
Formerly a professional windsurfer, Chef Kemal Demirasal took on the history of Anatolia in the kitchen, opening his first restaurant in 2007 in the town of Çeşme on the Aegean coast. A steel and glass structure surrounded by the coast’s flora and fauna, Alancha became an instant hit, not only for its minimal aesthetic but also for its experimental tasting menus that had a clearly Scandinavian influence. It wasn’t long before Demirasal became one of Turkey’s most acclaimed chefs, and in 2015, he brought Alancha to Istanbul in an equally modern two-floored space in the upscale Maçka district. With a state-of-the-art test kitchen and research facility, Demirasal and his team are constantly experimenting to bring extremely creative menus to Istanbul’s culinary scene.
Open In Google Maps
Istanbul, Turkey
Give us feedback

Restaurant, Turkish
Facebook
Email
Twitter
Pinterest
Copy link
Share
Map View
One of Istanbul’s most recognizable chefs, Mehmet Gürs is a chef and partner of 19 successful restaurants and cafés. His most well-known restaurant is, of course, Mikla, one of Istanbul’s most renowned upscale restaurants, which has been credited as the city’s first culinary step in the direction of contemporary food. Gürs’ introduction of the ‘New Anatolian Kitchen,’ which respects traditional ingredients and recipes as they are transformed through new and ancient methods, influenced many Turkish chefs. Working with a full-time anthropologist, Gürs has created a tight network of the best local producers as well as acquiring a very deep knowledge of Turkey’s traditional products and techniques. Selected as one of the World’s 100 Best Restaurants in 2015, Mikla continues to be an institution of contemporary Turkish cuisine.
Open In Google Maps
Istanbul, Turkey
Give us feedback

Bar, Restaurant, Turkish
Facebook
Email
Twitter
Pinterest
Copy link
Share
Map View
Chef Civan Er’s interest in cooking started at a very young age when he spent time in his family kitchen recreating recipes he’d found in magazines. Inspired profoundly by the foods cooked by his neighbor’s family from Hatay, Er decided to work in the kitchen to make some extra money while studying International Relations in London. After two and a half years, Er completed his master’s degree while also having spent excessive amounts of time in the kitchen learning techniques from chefs from various ethnic backgrounds. Upon his return, Er worked at Changa, one of Istanbul’s most creative contemporary kitchens, for six years, climbing his way to the chef title. In 2013, the chef opened his own restaurant, Yeni Lokanta, where his love for experimenting with local ingredients and traditional recipes was fulfilled. The restaurant was an instant success, both casual and familiar but also experimental in its modernity.
Open In Google Maps
Istanbul, Turkey
Give us feedback

Born in İskenderun, Maksut Aşkar received an education in the kitchen while studying tourism and hotel management and spent a lot of time working at Istanbul restaurants and cafés. Upon graduating, Aşkar became manager at Nupera and began experimenting with food. Convinced that food evokes all the senses, he soon began doing food consultancy, and between the years 2007 and 2009, he opened his first restaurant, Multi, followed by LilBits between 2009-2012. However, it wasn’t until the chef opened his current restaurant, Neolokal, that he really began to express Turkish cuisine as a minimal art form. The tasting menus adhere to the farm-to-table concept and are composed of reinterpreted dishes whose inspiration comes from all corners of Anatolia.

Fine Dining, Modern
Give us feedback