Interview with Iola Lenzi: On Southeast Asian Art in Istanbul

Iola Lenzi, author of Museums of Southeast Asia, is a leading specialist on contemporary art from Southeast Asia, with years of experience under her belt from Singapore to Bangkok and, most recently, Istanbul. Culture Trip talks to Lenzi about The Roving Eye, her upcoming exhibition hosted at ARTER, Istanbul’s premier arts venue, and how the show aims to represent emerging and established artists from Southeast Asia. 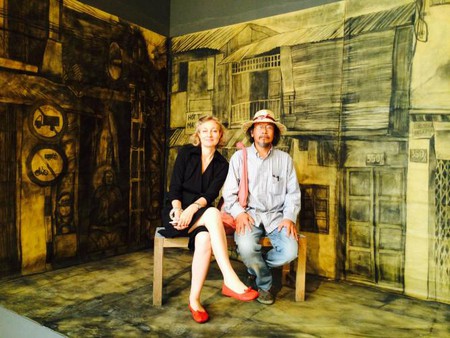 Iola Lenzi (left) with Thai artist Vasan Sitthiket seated within ‘The Past Moved’, an installation by Bui Cong Khanh

A law graduate, Lenzi worked at Sotheby’s and then in Chinese art in London before moving to Singapore in 1994. Arriving in Asia at a time when Southeast Asian contemporary art was erupting onto the international scene, Lenzi developed an expertise of regional art first through her critical writing, and then, in the 2000s, as a pioneering curator working with and commissioning art from the region’s most avant-garde and experimental practitioners. Over two decades as a lecturer, curator and critic, her research has produced critical discourse on Southeast Asian contemporary art, arguing for local narratives as opposed to perceiving the region’s art exclusively through Western tropes. Among the many canon-building exhibitions that Lenzi has curated, she has more recently helmed two major landmark exhibitions of SEA contemporary art: Negotiating Home History and Nation: Two Decades of Contemporary Art in Southeast Asia 1991-2011 at the Singapore Art Museum in 2011, and Concept Context Contestation: art and the collective in Southeast Asia at the Bangkok Art and Culture Centre (BACC 2013-2014) which encompassed four decades of SEA art practices.

This September, Lenzi curates The Roving Eye: Contemporary Art from Southeast Asia at ARTER (Vehbi Koc Foundation), in Istanbul which presents 40 works by 36 of Southeast Asia’s most innovative contemporary practitioners from Indonesia, Thailand, the Philippines, Singapore, Myanmar, Cambodia, Vietnam and Malaysia. The Roving Eye, opening 17 September 2014, is the first large, curated, institutional showing of SEA art in Europe and only the third such exhibition to focus exclusively on contemporary art from the region.

Art critic Bharti Lalwani speaks to Iola Lenzi to find out what distinguishes this exhibition and inquires how SEA art connects with a Turkish audience. 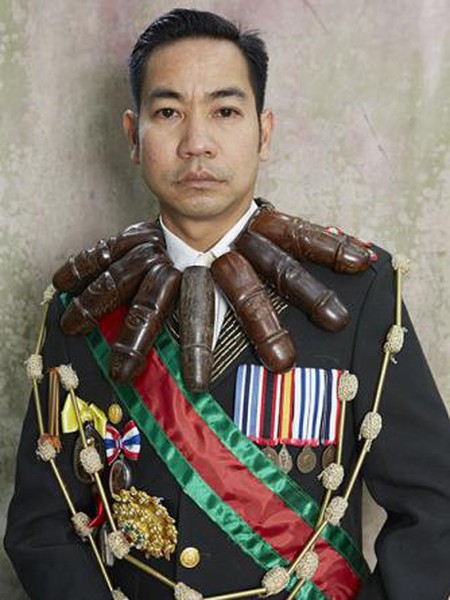 Bharti Lalwani: The phrase ‘Roving Eye’ alludes to multiple perspectives. Could you elaborate on what Roving Eye refers to in the context of your upcoming SEA exhibition?

Iola Lenzi: Studying Southeast Asian contemporary art over three generations, from the pioneers of mid-1970s Indonesia to young, third-generation practitioners emerging now, one sees significant developments in form, theme, and genre. But among the characteristics that define and distinguish regional contemporary art is a particular way of looking at the world, following through consistently from the 1970s until now. I call this the ‘roving eye’. I have referred to it previously in various essays as ‘prismic vision‘ or ‘prismatic vision’. It is a trait whereby the artist looks at issues from both inside and outside his or her home base. He or she develops the work thinking about multiple positions and viewpoints. It’s a sophisticated play of perspectives that many artists from the region engage in quite naturally. It lends the work a particular texture and flavour that makes it legible outside home contexts, even when pieces are dealing with very local matters.

BL: The Roving Eye is the third major exhibition you are curating on SEA contemporary art but its the first to step out of the region for a showing at an institution in Istanbul. Does this show complete the exhibition trilogy? What are the conceptual currents that Roving Eye expands on from the first two exhibitions?

IL: Yes, The Roving Eye is the third in a trilogy that aims to explore some principal attributes of regional art. ‘Negotiating Home, History and Nation’ at SAM in 2011 was a major survey that attempted to frame some of the ideas of Southeast Asian contemporary art, to anchor it in its breadth. Focusing exclusively on the region, it was sweeping in character, presenting works by artists from six countries and three generations in dialogue, so showing how certain approaches, themes, and interests are carried over time and geography. From there, I wished to expand on two of the region’s key attributes, including its conceptual bent in art, which was the subject of last year’s show at BACC Bangkok in Concept Context Contestation. In that show the aim was to flesh out the relationship between conceptual approaches in SEA art and artists‘ social engagement. The ARTER exhibition looks at a second major characteristic of regional contemporary: the artists’ juggling of perspectives. 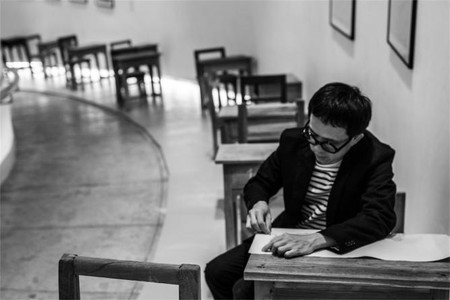 BL: I note that one specific work – ‘History Class’ by Thai artist Sutee Kunavichayanont – was featured in your previous two exhibitions and will feature again at ARTER. Are you deliberately establishing a common anchor between Negotiating Home, History…, Concept, Context… and The Roving Eye?

IL: Indeed, that is the idea. Sutee’s ‘History Class’ is in all three exhibitions though the one at SAM was one of the original version made in 2000, whereas the BACC and The Roving Eye expanded versions are from 2013. The piece is emblematic because it presents all the field’s salient traits. It is the ‘perfect’ work of Southeast Asian art because it has it all: it is interactive and indeed is designed to be activated by audiences sitting at the desks and making rubbings that they then take away, a gesture of solidarity with the protagonists of erased histories and a political intervention; it’s about reclaiming history (one of the field’s major themes); it has a political voice, it is politically subtle and socially subversive; it was made for an open-air public space and is thus accessible to people of all classes and education levels; materially and in its imagery it appropriates and alters the meaning of known icons so it is exemplar of regional conceptual play; medium-wise it employs a local non-art school vernacular so again forges semantic bridges with a wide swathe of the population.

At ARTER, as at BACC and SAM, I include some important works of Southeast Asian contemporary that are known from earlier ground-breaking exhibitions such as Traditions/Tensions of 1996 for example, and Asian Modernism of 1995. In this way, I hope audiences can see some connecting strands starting to appear, circumscribing the field. 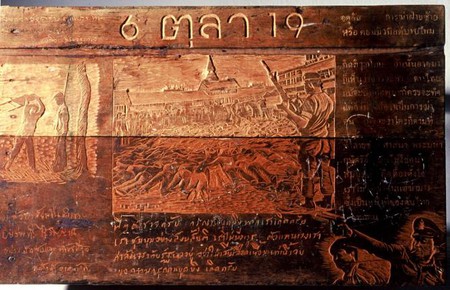 BL: An obvious question, why show SEA art in Turkey? Are there any historical parallels that connect the two?

IL: The theme of this exhibition made particular sense in Turkey because traditionally, Turkey, like SEA, is such an open place of exchange of goods and ideas. In the 21st century, Turkey is grappling with many of the issues that face Southeast Asia (the secular state versus the religious state; democratisation processes that do not necessarily match increased education etc.), so the art from SEA will hopefully resonate with the Turkish audience. 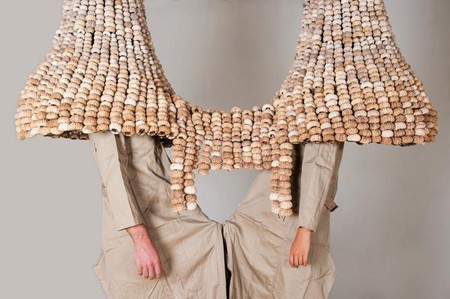 BL: Tell us about the new artworks that have been commissioned for this exhibition.

IL: There are a number, 15 in fact, either completely new, or extended or modified versions of existing works. But they do not come only from the third-generation artists whom you would expect to have making new work. FX Harsono has produced a new three-channel video for this show. Mella Jaarsma, likewise, has designed a completely fresh work in response to the exhibition concept. Also, Filipino duo Isabel and Alfredo Aquilizan have conceptualised a new mosaic collage pair of portraits depicting OFWs (overseas foreign workers). Sutee Kunavichayanont has made a new pair of history blackboards to extend his desk installation of 2013, and Michael Shaowanasai has produced new Kind and Queen portraits, in light-box form for presentation on the ARTER exterior, at street-level. Thai artist Tawatchai Puntusawasdi has responded to the Istanbul context and constructed a new experiential work on-site in Istanbul that, through a physical experience for the viewers, communicates the exhibition concept.

Young artists from Indonesia Duto Hardono and Restu Ratnaningtyas have also made new pieces, as have Bui Cong Khanh from Saigon, Luong Trinh and Nguyen SonX from Hanoi, and Tay Wei Leng of Singapore. Malaysian Ise Roslisham, Cambodian Srey Bandaul and Josephine Turalba from the Philippines have extended and re-worked previous works with new videos or image series. Vertical Submarine of Singapore has mapped out a new optics-illusional room installation, and Lee Wen of Singapore is contributing an Istanbul-made version of his seminal ‘Ping-Pong Go Round’. 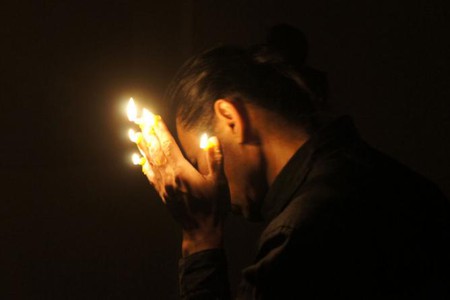 BL: And what of performance art?

IL: The idea is to introduce the Istanbul audience to performance and performative installations as well-developed and much-practiced genres in the region. Three performances will be produced on the opening afternoon and night, including the seminal five-hour ‘I Love You’ by Indonesia’s Melati Suryodarmo, a two-person piece by Vietnam’s Bui Cong Khanh, and a third by Singapore’s Jason Lim.

“If the Turkish audience conceives Southeast Asia typically as a place of water buffaloes, conical hats, and dancing girls in rice fields, then no, the art here will not relate to that experience of Asia….

…a majority of works here are questioning, critical, and contestative”

BL: Does this regional art have specific traits that distinguish it as typically Southeast Asian? What if some of these exhibited artworks shown away from the region are misconstrued as ‘exotic’?

IL: Yes, I would say this exhibition, though focusing quite deliberately on the roving eye and the mechanism that artists in Southeast Asia deploy to consider issues from multiple vantage points, also works to highlight other attributes of Southeast Asian contemporary. Conceptual approaches; critical discourses about history, politics, gender, identity; and interactive methods to engage audiences actively in the works’ ideas are some of the most prominent.

As for exoticism, that of course is in the eye of the beholder, not the maker. ‘Exotic’ has a number of meanings, but if you mean art conforming to a visual stereotype of aestheticised Asia, then the art presented here has nothing at all to do with the exotic. The work here looks mostly at regional tensions, local frictions and unravels these from different angles. If the Turkish audience conceives Southeast Asia typically as a place of water buffaloes, conical hats, and dancing girls in rice fields, then no, the art here will not relate to that experience of Asia. Furthermore, since a majority of works here are questioning, critical, and contestative in some way, it will be difficult to construe them as exotic.

BL: Finally, What do you hope audiences in Istanbul may take away from this exhibition?

IL: This exhibition is designed to bring both breadth of Southeast Asian practice and depth to Istanbul. It is my hope that through this work from three generations and eight SEA countries, Turkish viewers will get a sense of the central formal, thematic, and conceptual preferences of regional artists. I hope Turkish audiences are able to relate to pieces that in the end, if starting with local concerns in Asia, reach out to all through artistic language and a way of framing that is inclusive. I hope that the public in Turkey experiencing this work will, in some ways, find it familiar, but also recognise and be surprised by its uniqueness, its ability to chart its own path in the noisy world of global contemporary art.