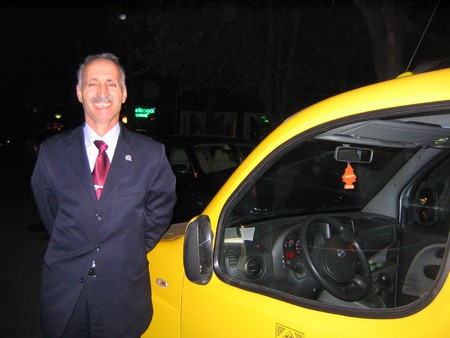 Ihsan Aknur is Istanbul’s most famous taxi driver and it has very much to do with the fact that he not only loves his city but also gives in to random bouts of belly dancing inside or outside his vehicle. Check out Aknur’s story and his rise to fame.

When Anthony Bourdain visited Istanbul in 2013 for an episode of his famous travel and food show, Parts Unknown, he also ended up in a cab with Ihsan Aknur, who instantly became a hit because of his exuberant enthusiasm for his city (and life in general). Bourdain watched as Aknur got out of the car and belly danced on the road after which the superbly happy driver took him to his favourite restaurant. Aknur has been a taxi driver for more than 40 years, having had his start with washing cabs before he got to drive minibuses and then taxis at the age of 14.

Nowadays, he picks up visitors in the Old City and while they’re stuck in traffic (something quite inevitable in Istanbul) he loves to share all the facts he has learned regarding the Byzantine and Ottoman history of his beloved city. On his own website, Aknur tells the story of his life as well as his profound dedication to his profession. The taxi driver, who is also the father of three sons and one daughter, loves nothing more than showing guests his city and making sure they have a good time while doing so. With the motto that life’s biggest obstacle is only one’s own self, Aknur’s colourful personality caught the eye of the Hundred Dollar Taxi Ride program on the National Geographic channel and later, Anthony Bourdain’s show on CNN.

Always developing himself a little further and trying to learn as much as he can, Aknur has already mastered four languages so that he can converse with his guests in their native tongue. Most recently featured by the Turkish TV channel, HT TV, Aknur showed off his language skills, speaking Italian, German, French and English interchangeably. Aknur’s own youtube channel is also filled with videos that he made with his guests, whether it’s tourists from America who have come back to visit him or a live trumpet performance in the seat next to him.