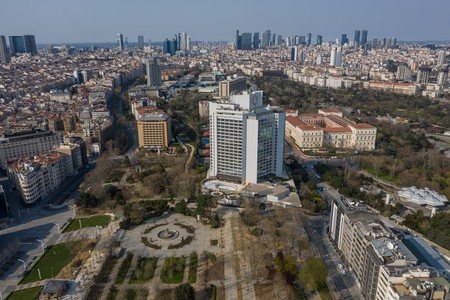 When city planner Henri Prost graduated from the world-famous Ecole des Beaux-Arts in Paris in the early 20th century, he was tasked with redesigning many of France’s colonial cities. One of the pioneers of urbanism, he brought modernity to much of North Africa – introducing wide boulevards, spacious apartment blocks and plenty of public shared space. You can still see his built legacy in Istanbul and Marrakech today. 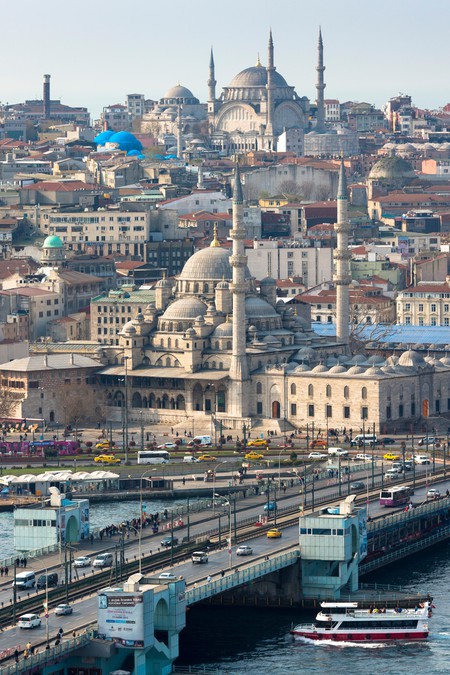 View from the Bosphorus of the 17th-century Yeni Camii, or New Mosque, with the Blue Mosque in the background | | © Tim Graham / Alamy Stock Photo

In May 2013, thousands of Turks descended on a green space in the centre of Istanbul. A few days later, the park was a sea of tents, placards and protestors – a mass of humanity gathered to express outrage at President Erdogan’s plans to build a faux-historic-Islamic shopping mall on one of this dense city’s few central green spaces.

By the beginning of June, Gezi Park had become a battleground: bricks from the barricades, built from torn-up pavements, were hurled at police and back came water cannon and rubber bullets. Nightly riots lit up the square with flares of red as fireworks flew. Erdogan backed down but launched a new wave of repression, imprisoning the ringleaders. For a few nights, Gezi Park flickered onto the world’s news screens and that morass of people covering every last blade of grass populated the front pages.

Gezi Park and Taksim Square has been the focal point of protests, parades and propaganda since it opened in 1943. This central, pivotal space is the legacy of Henri Prost, a French architect-urbanist whose plans profoundly altered the shape of French colonial cities across North Africa and, of course, Istanbul itself. 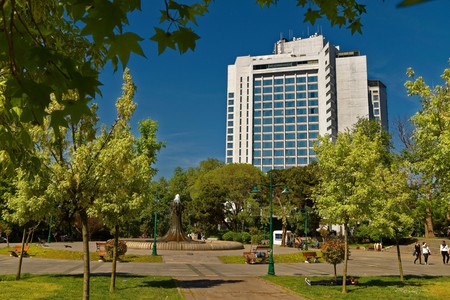 Prost (1874-1959) became the preeminent French planner at a time when urbanism, or town planning, was emerging as an autonomous discipline separate from architecture, geography and military engineering. His work was much in demand, as cities from Casablanca to Istanbul wanted to style themselves as modern metropolises.

Prost has been compared to Baron von Haussmann, the great planner of Paris, whose grand squares and boulevards forged a new city in the mid 1800s. However, it’s not an accurate comparison, insofar as Haussmann brutally smashed through the alleys and lanes of medieval Paris, radically recasting the city as a place of modernity and leaving only a few old monuments. He ruthlessly destroyed the historic centre, partly through military necessity – to allow troops to march quickly through the city and to get rid of the tight alleys that had proved so easy to barricade during successive revolutions – and partly through a desire to recreate the city as a model of a grand imperial capital.

In each city he alighted on, Prost was careful to preserve the skylines, the characteristic profiles of the minarets and the shady alleys of the bazaars and casbahs, but to add a layer of modern transport and quarters suited to the needs of a newly demanding middle class as well as of the expats and cosmopolitans who wanted a shimmer of French sophistication amid the market stalls and coffeehouses.

Prost had a conventional background. From Paris himself, he attended the prestigious École des Beaux-Arts, at that time the world’s centre of architecture, where modernity was key. Graduating at the very beginning of the 20th century he entered an era in which urbanism was gelling into a coherent discipline, with France at the apex of its imperial might. 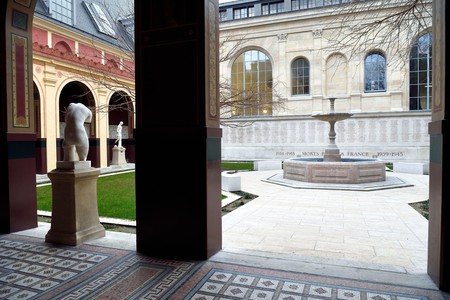 In 1913 he was invited by the French military governor of Morocco to work on plans for Marrakech, Casablanca, Meknes, Fez and Rabat; as the First World War raged in Europe, the opportunities for architects had all but dried up. Prost stayed in Morocco for a decade; yet despite his large-scale urban legacy, he is almost certainly best remembered for a slice of pure Orientalist fantasy and luxury, a sickly sweet baclava of a building, the Mamounia hotel. 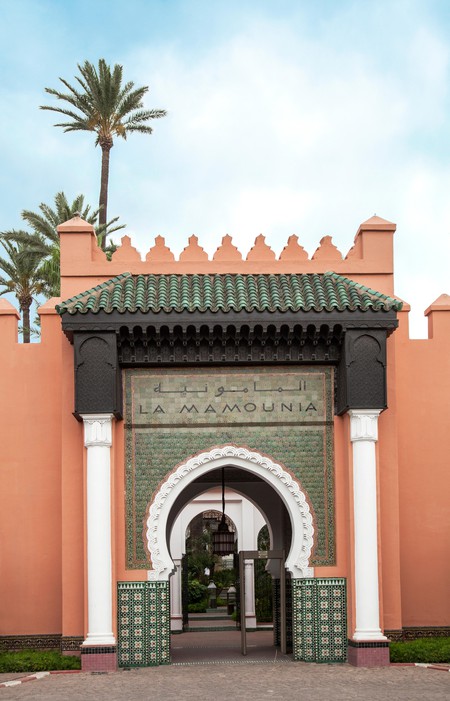 Built in 1929, this Marrakech institution revels in a cocktail of Islamic courtyards, Andalucian fountains and geometric tiles, Art Deco chic and a bohemian idyll of louche Orientalism. Prost designed it with fellow architect Antoine Marchisio and it remains a touchstone of Orientalist super-luxe. In a way it draws on all the successes and failures of Prost’s work, a style that sits self-consciously at the junction of Europe and North Africa, between Beaux-Arts and the bazaar. At the other end of the spectrum, Prost’s 1920s design for Casablanca’s abattoir was another fine Islamic revival structure. Abandoned in 2002, the cavernous halls were used for a while as a cultural incubator, with free public performances and a theatre company still residing within.

Prost’s interventions were considered. It is true that he destroyed a lot, demolishing old lanes and houses to push modern roads through cities that dated back two millennia or more. But he was always aware of the value of history and the importance of place.

In Istanbul, for instance, he was adamant that the city’s distinctive skyline of minarets and domes, the hybrid of Byzantine and Ottoman monuments, should be maintained; he imposed a height limit of 40 metres (131 feet) across the city so the Hagia Sophia and the Blue Mosque should always define the centre. In Casablanca, Fez and Marrakech, he kept the networks of labyrinthine streets and the arcaded markets, and many of his new streets followed traditional forms – the ogee arches, the white walls and the cool-shadowed arcades.

Instead of ripping out the hearts of the city centres, as advocated by many of his modernist near-contemporaries, notably Le Corbusier, Prost demolished only what was necessary – which was often plenty. Instead of rebuilding the centres, he designed new neighbourhoods with a European sensibility: Parisian-style apartment blocks on grand, tree-shaded boulevards with little green squares scattered throughout.

While he might have gained respect for his preservation of the historic fabric, he has also, more recently, been reassessed by historians who claim that his plans brought segregation to the city. By ignoring the crowded casbahs and alleys (except where he wanted to bulldoze through to put a road there), he left the indigenous populations in overcrowded, unsanitary conditions, while housing French colonialists in luxury with spacious new quarters. It was almost a kind of architectural apartheid. 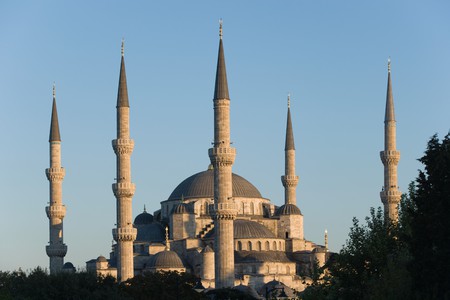 You might argue, however, that Prost acknowledged difference: difference in lifestyle and desire and the new quartiers of the cities he worked in became much-loved neighbourhoods, appreciated by locals, tourists and global elites alike. It is also the case that, in Istanbul in particular, he created a network of generous public spaces (“espaces libres“) that created, for the first time, a civic realm in which classes, religions and genders could mix freely and in which women could live a public life without censure. This was wholly in keeping with President Mustafa Kemal Atatürk’s notion that Turkey should become a modern, secular nation, shedding its traditions and codes while respecting its past.

In some ways Prost might be compared with the great urbanist of New York, Robert Moses. Moses, too, began with shared space, creating a network of public beaches, playgrounds and parks across the city and the state. Moses, too, built roads through the centre of the city, often destroying the delicate ecosystems of urban connections and blighting formerly bustling neighbourhoods. And Moses, too, put all his eggs into the automobile basket, counting on cars as the future and condemning New York to a future of clogged arteries just as Prost’s plans have failed to keep up with changing demand.

But while Moses became consumed with his own ego, Prost never fell into that trap. His work remained considered and careful, respectful of the traditions of a North African and Islamic architecture that had evolved to cope with the cultural and climatic conditions and yet determined to add a new layer of unfussy – and very French – modernity. His additions have become much-valued components of their respective cities and even if his work cannot help but bring with it a whiff of colonial arrogance, it has also proved popular, successful and enduring – a wonderfully urbane historic hybrid.