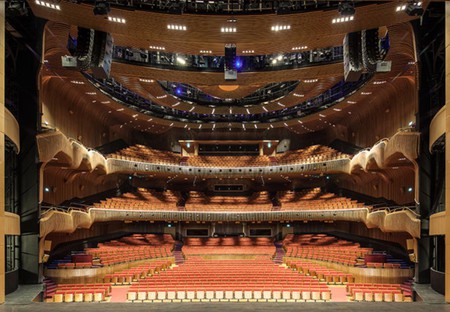 When Zorlu Center opened in Istanbul in 2013, shoppers arrived enthusiastically to visit the city’s first Apple store, as well as the city’s first branches of Crate & Barrel, Eataly, Jamie’s Italian, and Tom’s Kitchen. The impressive mutli-use complex also continued to impress with the opening of the Raffles Hotel and Turkey’s largest stage, the Zorlu Center Performans Sanatları Merkezi (Performing Arts Center). We take a look at the history of this mammoth stage and its most popular productions.

Set in a 50,000 square meter space, the Zorlu Center PSM is big enough to accommodate almost any large-scale production imaginable. From orchestra to ballet, dance to opera, contemporary music to musicals, the center’s state-of-the-art technology also ensures that the audio-visual experience is enhanced thoroughly. Operated by New York City based Nederlander Worldwide Entertainment, the performance center is run by the company’s senior vice president Ray Cullom, who oversees the programming and operation.

As for the impressive details of the center, the main theater has two balconies and a 2,242 seat capacity, with a stage that measures 24 meters with a fly system of 30 meters and a total area of 1,500 square meters. The center also has a drama stage that’s a bit smaller than the main stage, yet is equipped with the same superior-quality sound, video and light show technology. Backstage, the center’s studio allows for recording, editing, mixing, and mastering as well as rehearsals and events.

Highlights from the first season included Broadway’s Jersey Boys, which was the venue’s first Broadway musical. PSM continued with the Broadway theme bringing Cats and Notre Dame de Paris to Istanbul. A first in Turkey, the famous ballet The Nutcracker came to the city, while the first local artist to grace the stage was famous pianist Fazıl Say. In the new season, An Evening with Hugh Jackman was a huge hit, while productions of Beauty And The Beast, The Phantom Of The Opera and La Bohème were all performed in Turkey for the first time. The Silk Road Ensemble with Yo-Yo Ma was also a milestone in terms of the center’s classical music roster.

Zorlu PSM also unveiled a City Stage, a social responsibility project where free public performances bring together artists and audiences. With the aim of encouraging emerging talents to share their art with the community, every type of performance art is considered for two categories. In the ‘The Stage Is Yours’ category, all artists are able to take the stage to perform, while the ‘Artist Talks’ series allows audiences to meet and interact with their favorite artists.