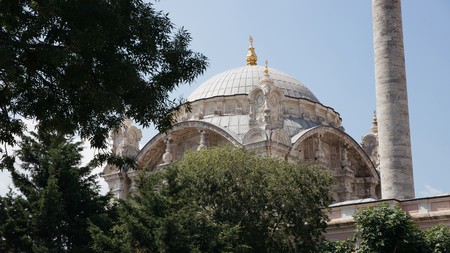 Sultanahmet? Been there. Beyoğlu? Done that. Everyone who visits Istanbul takes in the tried-and-tested areas, but whatever the guidebooks say, it is the neighbourhoods beyond the 15 July Martyrs Bridge that are begging to be explored. If you want to see another side of the city, forget the East-meets-West cliché and head north by northeast.

A snapshot from the Galata Bridge: it’s a hazy summer’s evening and fishermen in flat caps are lined up against the railings like dominoes, angling for a catch from the Bosporus. Listen and you can hear the muezzin’s call to prayer drifting from the Ottoman-era Yeni Cami mosque, while businessmen on their way home from work strike deals in American English on smartphones. Around the same time, students in silk headscarves trot across the bridge, shying from beer-drinking tourists in the humid air before rushing to catch the ferry to Kadıköy, the prosperous seaside hub on the city’s eastern bank. 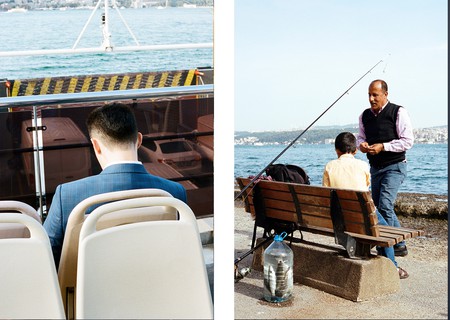 Between people-watching on the ferry to Kadıköy and angling on the Bosporus, there’s always plenty going on in this part of Istanbul | © Ina Niehoff

Blame geography for the slew of contradictions. Istanbul, perhaps more than any other city, has been shaped by its location. Over centuries, at the confluence of the Sea of Marmara and the Black Sea, it has absorbed Armenian, Greek, Judeo-Spanish, Roman and Anatolian influences, and it doesn’t take long to be caught between worlds. It’s East meets West; Islam meets Christianity; Europe meets Asia. Beautiful, compelling, uplifting, misunderstood. Small wonder it’s referred to as the world’s cultural melting pot.

At the heart of all of this life is a narrow, 32-kilometre-long, north-south trough: the Bosporus Strait. Never far away, the strait in many ways defines Istanbul and the people who live here. Everyone is affected by the continental divide’s ebb and flow, and in this real-life drama, the Bosporus has many roles to play: tourist attraction, summer playground, congested highway, trade route. More than just fascinating, it is significant, with scores of fishing boats, pleasure cruisers and speedboats navigating the treacherous currents from dawn until dusk. There’s little room to manoeuvre, but this makes it alluring, hypnotic and dangerous – and everyone wants a piece of it. 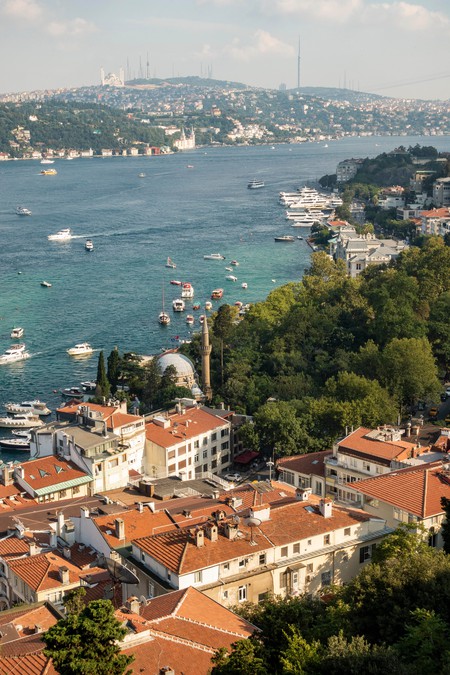 It’s easy to imagine, then, that when the Ottoman rulers first moved into the flashy Dolmabahçe Palace on the western embankment back in 1856, they would have been pretty pleased with the setting. They would be less impressed, however, to learn that this prime strip of real estate has since been bypassed and the place to be these days is somewhere else entirely. Not southwest in centuries-old Sultanahmet, with its unmistakeable silhouettes framed against the Golden Horn. And not in Beyoğlu, with its overwhelming shops, bars and street hustlers. Whatever the guidebooks tell you, nowadays you’ll want to head farther north along the European shore.

For starters, it’s here in the suburbs of Ortaköy, beyond Beşiktaş, that the cobbled streets and tightly squeezed shops give way to one of the most picturesque mosques you’re ever likely to see. Designed by the same father-and-son team behind the Dolmabahçe Palace, the Neo-Baroque Ortaköy Mosque teeters on the water’s edge, and the square of cafés and restaurants around it has turned hanging out into a serious art form. While plump pigeons get fed and boats come and go from the pier, people fill up on waffles and almost chewy Anatolian mastic ice cream from Mado. 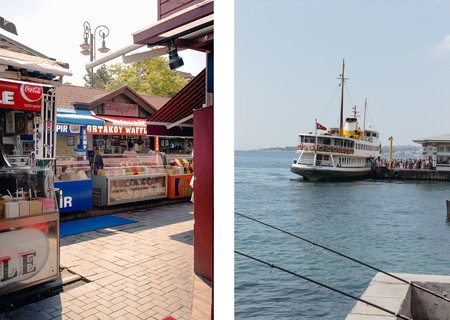 Funnelling off from this square, you’ll find some of the most memorable eating and drinking places in the city. On the corner of Vapur İskelesi Sokak is the House Café, a popular brunch and burger joint. As much as for its views, you’ll want to come for its meatballs, wafer-thin lahmacun (Turkish pizza) and jalapeño burgers. Jammed nearby is Hobo, a bistro and grill with all the exposed brickwork you’d find in a Berlin nightclub. It may not look like much from outside, but its sprawling terrace draws a crowd.

Like the rest of Ortaköy, even the street food here is an exercise in theatre. The number one staple is kumpir (baked potato), and around a dozen or so stands sell their mix of potatoes and white kaşar cheese (made from sheep’s milk) on Kumpir Sokak. Appropriately, it’s known as Baked Potato Street, and each vendor offers what seems to be 1,001 toppings: hot-pink cabbage, smoky black olives, spicy red-pepper sauce, lemony couscous – you name it. It’s as if the vendors are challenging one another to see who can pile on the most toppings.

In summer, come at the weekend for the flea market and second-hand bookshops to savour a side of Istanbul few visitors see. Just accept you’ll have everyone and their grandparents munching on hot potatoes beside you. Gratifyingly, the salty air does wonders for clearing your head after a belt-loosening lunch. North of here, the road wiggles and runs parallel to the water, veering inland when it feels like it. Traditionally, pashas and the city’s wealthy doyens migrated to the Bosporus to avoid the summer heat, and the area is now populated by dozens of rustic, ramshackle yalis: exquisite timber mansions with direct access to the shore. Some of these, such as the tastefully hidden Hôtel Les Ottomans, have now been converted into swanky boutique hotels.

There are other treats hiding further along the road. Past the 15 July Martyrs Bridge, the water-hugging suburb of Arnavutköy soon takes over – famous for streets lined with pastel yalis. The history books tell us that Constantine the Great had a church dedicated to St Michael built here, but the real attractions are the pocket-size restaurants and galleries that dot the side streets. With its rolling hills and sardine-packed houses, you would be forgiven for thinking you were in San Francisco. At times, the streets are so narrow that residents park their cars right in the middle.

Before leaving, check out Galeri Selvin 2, a diminutive purveyor of fine arts and sculpture, or stop in to smoke shisha at the Market at Bosphorus, a steakhouse that, rather bizarrely, serves charcuterie straight onto passing yachts.

Mention Bebek to someone and they’ll likely arch their eyebrows – this quasi-Beverly Hills neighbourhood is the most fashionable address in the city. Soak up this vibe at Lucca, a hip café where Turkish footballers and soap stars come to see and be seen. It’s not uncommon for table queues to stretch right around the block. 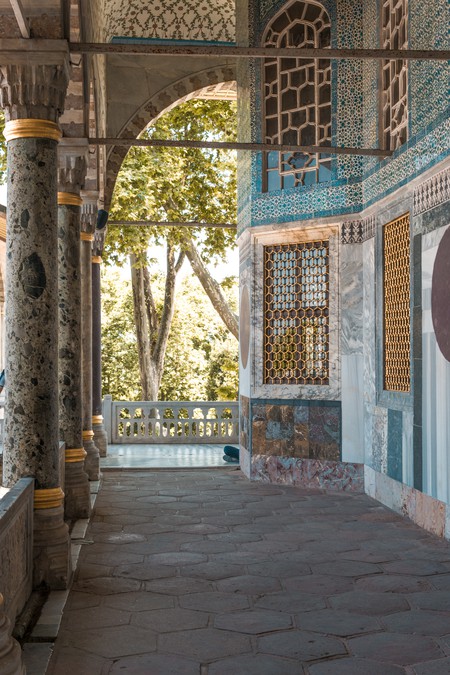 The area’s café culture is very much in evidence on the main drag, Cevdet Paşa Caddesi, which is perpetually jammed with flash cars. This is known as Istanbul’s macaron mile because of Baylan, Turkey’s version of French confectioner Ladurée, and Bebek Badem Ezmesi, a boutique specialising in almond and pistachio baklava that dates back to 1904. Although pricey, they’re a Bosporus highlight, and residents couldn’t give a hoot about the cost. Buying real estate here can set you back upwards of £9 million for a six-bed villa.

It’s not often you’ll find a Starbucks recommended anywhere apart from the Seattle original, but Bebek’s two-tiered marvel is an exception. This coffeehouse is a great place to people-watch, and it has one of the best terraces on the whole waterfront. Take your latte outside to admire the wooden fishing boats and luxury yachts. 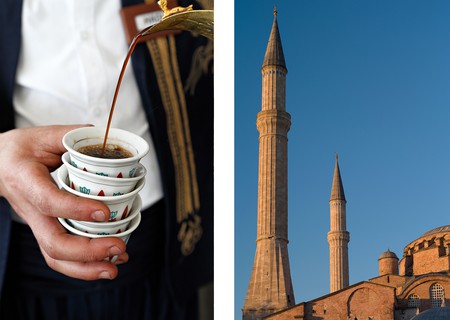 Beyond the Fatih Sultan Mehmet Bridge are the bones of Rumelihisarı, an Ottoman fortress dating to 1452 and a building that’s served as a customs checkpoint, a prison and – more recently – a music venue for summer festivals. It’s effectively the gateway to Emirgan, an area renowned for museums and galleries, including Borusan Contemporary, a quirky art house with offices and a satisfying mix of exhibition spaces, as well as a store and outdoor terraces. As in many other galleries in Istanbul, there’s not an ounce of stuffiness anywhere.

The impression is the same at the stunning Sakıp Sabancı Museum. Bequeathed to the city by one of Turkey’s most renowned philanthropists, Sakıp Sabancı, the museum is dedicated to calligraphic art, religious documents and paintings from the Ottoman era. What makes it unique, however, is not the vast array of fine art or the fact that the galleries are housed in a glorious mansion once home to high-ranking pashas and Egyptian governors. Rather unexpectedly, it’s the rooftop restaurant run by the Culinary Arts Academy of Istanbul that draws the plaudits. It’s run by instructor-chefs, and their students present dishes that form part of their curriculum.

You can’t ever really finish exploring Emirgan or Bebek or Arnavutköy or Ortaköy – or any other corner of this incomparably vast and complex city, for that matter – but the pull of the Asian coast on the other side of the Bosporus is just as strong, and this, undoubtedly, should be your next port of call. While this parting may be bittersweet, there’s a handy Turkish phrase for occasions like these: Güle güle gidin. ‘May you go laughing; may you go well’. 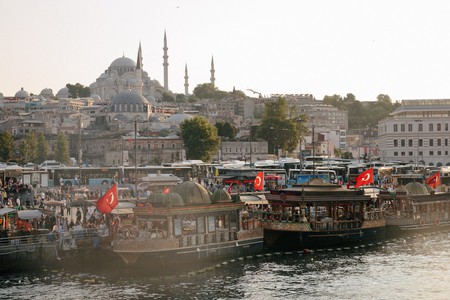