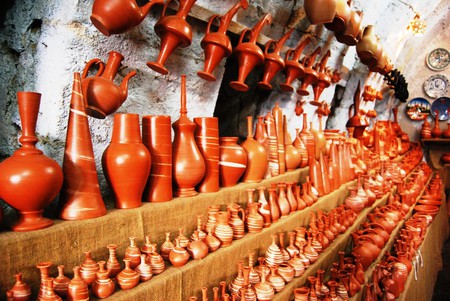 Cappadocia is one of Turkey’s most popular tourist destinations because of the mysterious fairy chimneys that have made its landscape so iconic. However, in the town of Avanos it is also the tradition of pottery making in the ateliers of craftsmen that attracts visitors.

Set on the banks of the Kızılırmak (Red River), Avanos is about 8 kilometers from Cappadocia’s historical center of Göreme. Here you’ll find all the usual tourists haunts such as Turkish baths and boutique hotels, however the main reason to visit this town is for its historic tradition of pottery making. The Red River, which also happens to be one of Turkey’s longest rivers, has supplied the many generations of craftsmen with the red clay used to create their iconic art. Pottery has been produced in this region as far back as around 2000 BC, the time of the Hittites. 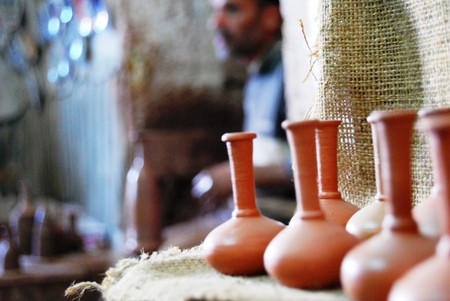 During a visit you’ll come across many family run potteries and it’s recommended you avoid the tourists shops where pottery is also sold and instead opt for the ateliers of the craftsmen who continue to mold and shape the beautiful pottery with their expert hands. From ashtrays to more delicate vases, you’ll find that the beautiful red clay takes many shapes. The very talented potters use a foot driven spinning wheel to make the authentic Avanos pottery and always do so from scratch. The clay for these genuine products is acquired directly from the mineral-rich mud that can be found along the river. It takes years of experience to become a skilled potter, it’s far from easy to make Avanos pottery which exudes perfection in its handmade form. 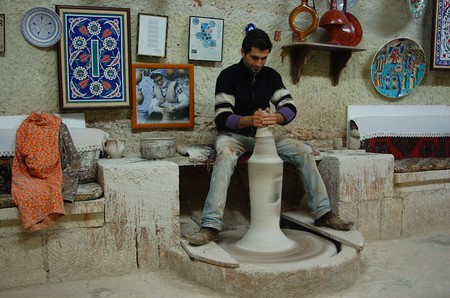 Of course that doesn’t mean you shouldn’t have a go at making your own quality earthenware and Avanos has plenty of workshops available where you can have a go at making pottery guided by one of the experts. A definite stop to make while in Avanos is the atelier and shop of Chez Galip. A master potter with a beautiful assortment of pottery, including handmade historic, contemporary, geometric, phosphorescent, and floral designs, Chez Galip is also famous for another reason: the hair museum in his basement. Composed of more than 16,000 hair samples from women who have visited his shop, the hair museum is covered entirely with locks of hair as well as notes with addresses. The reason for this peculiar collection is that Galip chooses ten winners twice a year who receive a week-long vacation in Cappadocia and a free workshop with the master himself. 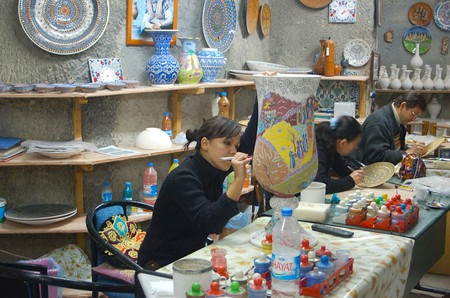