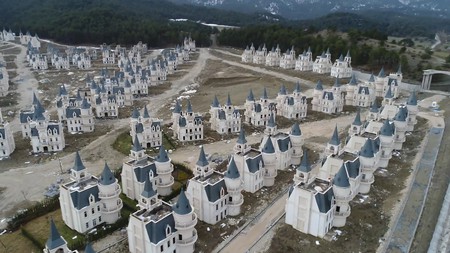 Starter castle, anyone? A still image from a video by Ruptly | © Ruptly

Sandwiched between Istanbul and the capital, Ankara, in Bolu province’s picturesque mountains, almost 600 identical French-style château dwellings are sitting empty after the developer of the Burj al Babas estate racked up a debt of $27 million, according to Bloomberg.

However, hundreds of houses have been left in various stages of completion due to the recent collapse of the Turkish economy, with the lira losing 38 percent of its value against the dollar in 2018. 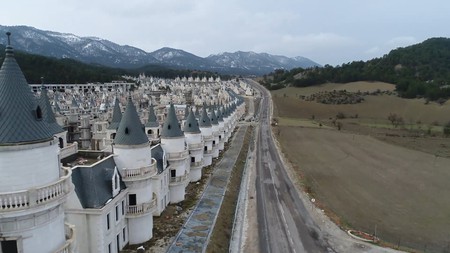 The vision for the project, which started in 2014, was to create an entire town of mini three-storey French-style châteaux, each with its own turrets, and an impressive large-scale classical domed building at the heart of the development.

If the development continues, this central building is set to be the community hub, housing a mosque, retail establishments, cinemas, restaurants, a nursery and even conference halls. In addition, the estate is also supposed to have various high-end sports facilities, an aqua park, Turkish baths, saunas and steam rooms.

The Sarot Group completed 587 of the houses before it went bankrupt; deputy chair Mezher Yerdelen told Bloomberg that he hoped construction could get off the ground again in 2019, explaining that the company needed to sell only 100 villas to pay off the debt. The project’s current value is $200 million, according to Mezher. 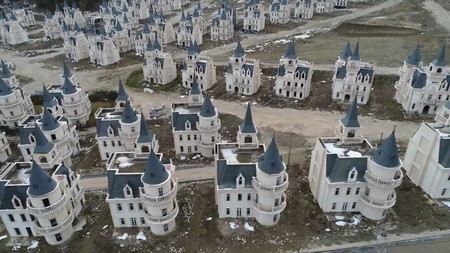 “I believe we can get over this crisis in four to five months and partially inaugurate the project in 2019,” Mezher has said.

The development hasn’t been popular with everyone, given the architecture’s stark contrast to the traditional Ottoman style of the local historical mansions in Mudurnu, with the town being added to the UNESCO World Heritage Tentative List in 2015.