Discover a Collection of Unique Ceilings From Across Istanbul

Discover a Collection of Unique Ceilings From Across Istanbul

Chora Museum | © sirona27/Flickr
It always pays to look up, way up, in Istanbul because some of the most beautiful and ornate spectacles can be found at the highest point of the city’s many historic sights. We took a look at some of the most striking ceilings that have been photographed and gazed at admiringly for many hundreds of years.

The ceilings of the Topkapı Palace are absolutely stunning, much like the rest of the palace, which is absolutely lavish as befitting the various sultans that resided there for almost 400 years. You can definitely tell how minute details were very important at the time to exude wealth and power.

When you’re walking around the Grand Bazaar, one of the world’s biggest and oldest covered bazaars, make sure to look up as well to see the beautiful painted traditional motifs that decorate the many passages and arches above.

The Dolmabahçe Palace was built in order to satisfy the sultan’s need for a more contemporary palace inspired by those owned by European monarchs. As such, the beautiful ceilings have a more European baroque aesthetic as compared to the traditional motifs of Topkapı. 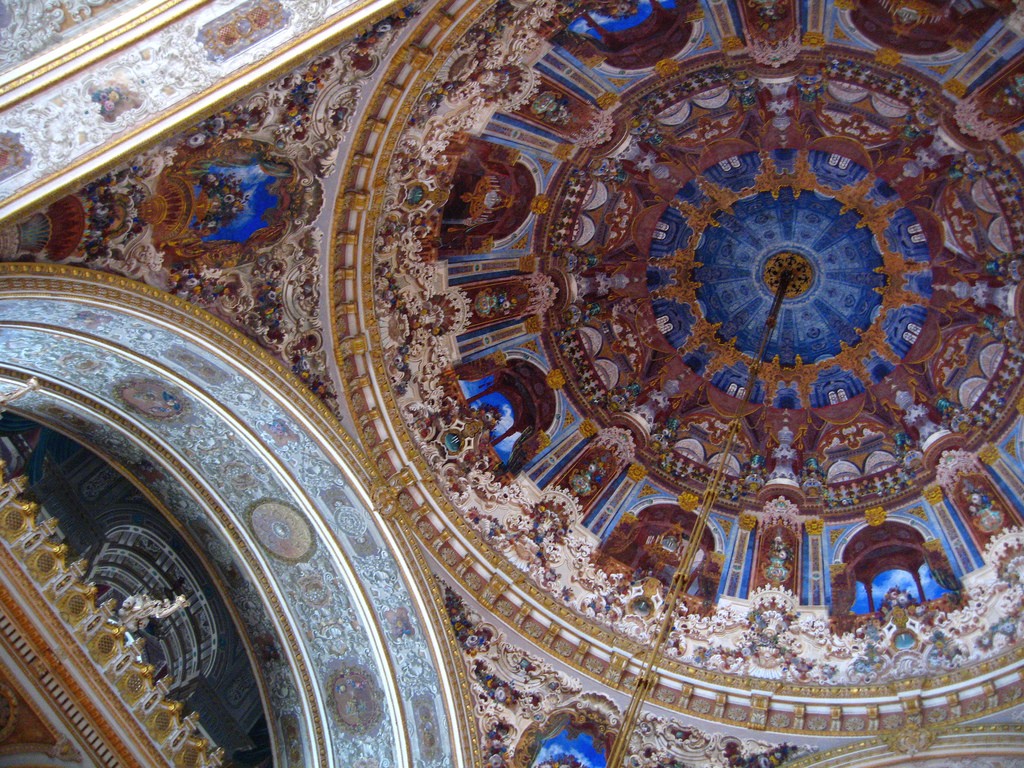 Museum, Cathedral
Aya Sofia (Hagia Sophia) | © aylamillerntor/Flickr
Book Now
There’s a lot that can be said for Hagia Sofia, one of the city’s most breathtaking sights, but let’s focus on the ceiling for now. An absolutely stunning work of art, the underside of the structure’s many domes shows how the Greek Orthodox Christian patriarchal basilica was turned into a mosque and then a museum.
More Info
Open In Google Maps
1 Ayasofya Meydanı, İstanbul, 34122, Turkey
+902125221750
View menu
Visit website
Visit Facebook page
Send an Email
Give us feedback

Museum
Museum of Turkish Ceramics | © Patrick/Flickr
The entry to the Tiled Kiosk Museum displays a fine collection of ceramics from Iznik, Kütahya, and Çanakkale from the 12th to the 20th century. The beautiful tiles (often hand-painted with designs) are one of the most iconic parts of Istanbul’s many historic facades and this museum is a great place to take a closer look.
More Info
Open In Google Maps
Osman Hamdibey Yokuşu, İstanbul, 34122, Turkey
+902125207740
View menu
Visit website
Visit Facebook page
Send an Email
Give us feedback

Mosque
Blue Mosque | © Andrey/Flickr
One of the city’s most imperial mosques, the Sultan Ahmed Cami (The Blue Mosque) was constructed between 1609 and 1616 and continues to serve those of faith to this day. The ceilings of the mosque are beautiful with intricate calligraphy and traditional motifs.
More Info
Open In Google Maps
No:7 Atmeydanı Caddesi, İstanbul, 34122, Turkey
+902124584468
View menu
Visit website
Visit Facebook page
Send an Email
Give us feedback

Church, Museum
Chora Museum | © sirona27/Flickr
The Chora Museum is a Byzantine Greek Orthodox church, which was turned into a museum in 1948 after serving as a mosque during the Ottoman era. Like the rest of the structure, the ceilings also possess some of the finest surviving Byzantine frescoes and mosaics.
More Info
Open In Google Maps
18 Kariye Cami Sokak, İstanbul, 34087, Turkey
+902126319241
View menu
Visit website
Visit Facebook page
Send an Email
Give us feedback

Mosque
Raindrop Chandelier at the Şakirin Mosque | © William Neuheisel/Flickr
The first mosque whose interior design was complete by a woman (interior designer Zeynep Fadıllıoğlu) was the Şakirin Mosque which is a contemporary interpretation of a mosque that brings together modern and traditional motifs perfectly. Make sure to look up when you visit to see the stunning recreations of ancient motifs on the wall as well as the famous handmade raindrop chandelier.
More Info
Open In Google Maps
No:2 Nuhkuyusu Caddesi, İstanbul, 34662, Turkey
View menu
Visit website
Visit Facebook page
Send an Email
Give us feedback
Book with our partner and we will earn a small commission.
Give us feedback