Did the Turks Actually Discover Snowboarding 300 Years Ago? 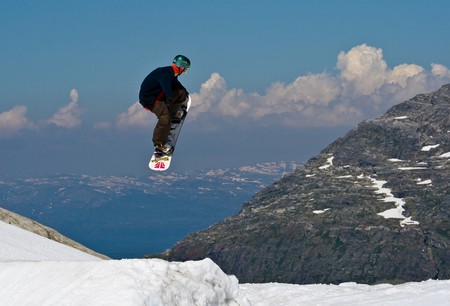 In a small village on the Black Sea coast, people have been using a rudimentary version of a snowboard to glide across the snow-covered valleys and peaks for over 300 years. The Lazboard or Petranboard, as it’s called, has become subject to a documentary that explores the origins of this unique local Turkish sport.

Many people associate snowboarding with Jake Burton Carpenter who, inspired by surfing and skateboarding, established Burton snowboards in his backyard shed in Vermont in the 1970s. However, very much far away from North America, in the untouched Kaçkar Mountain region of Turkey’s Black Sea area, a more primitive form of snowboarding was discovered hundreds of years ago. Named after Petran, the village where it was invented, the Petranboard is composed of a few wooden planks hammered together, bent through the use of hot water, and generously waxed in order to glide across the deep snow. A steering rope is also attached, and the rider holds a wooden stick in order to obtain balance while boarding.

In the documentary Foothills: The Unlinked Heritage of Snowboarding, Patagonia Ambassadors Alex Yoder and Nick Russel traveled far and wide to find the small village of Petran to delve into a sport that has been around for nearly 300 years. Located in the vicinity of the glorious Kaçkar Mountains, Petran (also known as Meşeköy) is a small village where generations of locals have used this board, riding the deep snow in the winter months without knowing that they, in fact, invented the forefather of modern snowboarding.

The two Patagonia-sponsored snowboarders are not the only ones who have become acquainted with this unique sport yet untouched by modern technology. In 2009, pro snowboarder Jeremy Jones also made a short documentary about the remote village of Meşeköy, with its stunning mountains and its welcoming locals and their simple wooden boards. In this documentary, Jones talks to the locals who treasure the sport because, in a remote village such as Meşeköy, it represents one of the only fun activities that the people can enjoy. As expected, there are also some remarkable shots of Jones expertly gliding through the deep snow of the area’s pristine mountains.

As for the origins of the Lazboard (the “Laz” referring to people who are native to the Black Sea region), there are a few stories, the most popular of which is about a boy who found a way of quickly cleaning the prayer rugs by gliding around in them in the snow. It’s this gliding that may have given way to the idea of riding upright in the snow with a board underfoot. Nowadays, the sport has become quite popular once more with an annual festival celebrated every January where locals display their Lazboard skills to visitors who are also keen to try out the handmade board. As expected, the festival also features plenty of exuberant “halay” dancing, which is synonymous with Laz culture.