Cappadocia | © Pixabay
The honeyed tones of the landscape and the distinctive shapes of its fairy chimneys and rock-cut dwellings make Turkey’s Cappadocia a magical land. Large-scale tourism is a relatively new phenomenon in the region, making for a buzzing and expanding restaurant scene. Different culinary traditions blend together against the backdrop of marvellous scenery in our pick of Cappadoccia’s 10 best restaurants.

Cafe, Restaurant, Mediterranean, European, Turkish
Cappadocia | © Pixabay
Once a village cafe, Elai has become one of the best restaurants in Cappadocia. Standing in the shade of Üçhisar Castle and overlooking part of the Red Valley and Pigeon Valley, the outdoor terrace offers magnificent sights. The splendid Cappadocian landscape stretches as far as Mount Erciyes and is a joy for the eye. Guests can enjoy wine and cocktails on the terrace as well as an elaborate menu in the authentic atmosphere of the rock-carved dining halls. The Turkish fusion menu brings together traditional local dishes with a modern twist and plates from international cuisines.
More Info
Open In Google Maps
61 Göreme Caddesi, Nevşehir, 50420, Turkey
+903842193181
View menu
Visit website
Visit Facebook page
Send an Email
Give us feedback

Restaurant, Turkish, Vegetarian, $$$
The lower level of Han Çiragan restaurant rests in the shadow of a vine lattice, providing a shady spot. The extensive menu at Han Çiragan offers a variety of Turkish traditional dishes stamped with a modern accent. Saç tava, dolmas and pot kebabs come from a the busy kitchen where guests are welcome to pop in. The restaurant also prides itself on a strong list of regional wines like Kalecikkarasi, Öküzgözü, and Bogazkere, and hosts live jazz concerts every night.
More Info
Open In Google Maps
4 Cumhuriyet Mey., Nevşehir, 50400, Turkey
+903843412566
View menu
Visit website
Visit Facebook page
Send an Email
Give us feedback

Restaurant, Turkish
Turkish Food | © Chad Skeers /Flickr
Located within Üçhisar’s fine Museum Hotel , Lil’a allows diners to delight in splendid sights through the windows of the elegant dining rooms, as well as from the beautiful terrace decorated with tall, luxuriant flower vases. Award-winning chef Mustafa Buyukhan carefully crafts a menu that offers modern interpretations of classical Turkish dishes in exceptional presentations. Under his supervision, the keenest of foodies can also learn how to prepare a perfect Turkish meal in one of the cooking classes offered at the restaurant.
More Info
Open In Google Maps
No.2 Göreme Caddesi, Nevşehir, 50240, Turkey
+903842192220
View menu
Visit website
Visit Facebook page
Send an Email
Give us feedback

Restaurant, Turkish, $$$
Omurca Art Café | Courtesy of Omurca Art Café
Seten is centered around an arched courtyard, which twice a year provides a beautiful space for a classical music concert. A variety of Anatolian and Turkish dishes are prepared from locally sourced ingredients using traditional cooking techniques. Guests can savor plates like yaprak sarma (rice wrapped in vine leaves and cooked in a tandir oven), and çiçek dolması (Göreme-style stuffed squash blossoms). The restaurant prides itself on its own wine cave cellar, and is ideally located next to the Cappadocia Cultural Centre, a small antiques gallery showcasing local artefacts such as pottery, jewellery and Anatolian textiles.
More Info
Open In Google Maps
No:42 Aydınlı Sokak, Nevşehir, 50180, Turkey
+903842713025
View menu
Visit website
Visit Facebook page
Send an Email
Give us feedback

An entrance enclosed in blooming ivy welcomes guests into Dibek, in the centre of Göreme. The traditional atmosphere of the 475-year-old building place is preserved by the low wooden tables around which guests can enjoy typical Turkish food and homemade wine. Dumplings, known locally as manti, are among the highlights of Dibek’s menu, together with testi kebabı, a slow cooked kebab meal prepared (upon reservation) in a sealed terracotta pot which is then broken at the table. 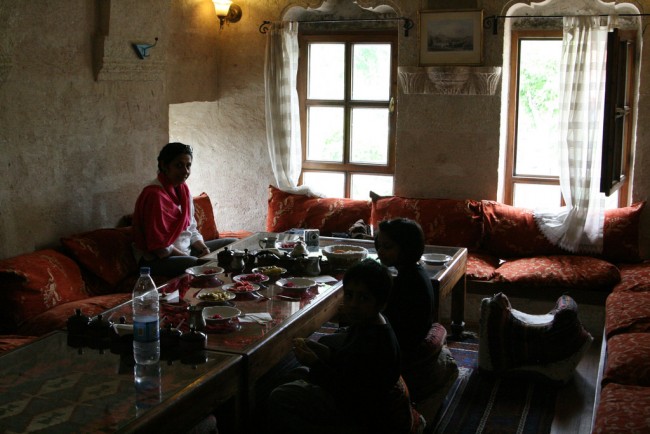 Restaurant, Turkish, $$$
A renowned center for the production of pottery since the Hittites, the town of Avanos is only a few kilometres away from the beautiful fairy chimneys of Zelve and Çavuşin. Located at the edge of this town is Hanedan restaurant, which was built to preserve the style of an ancient caravanserai. Historically located along trade routes like the Silk Road, these buildings were roadside inns where travelers could rest. Hanedan comprises thirteen ample rooms, ideally for large groups. Underneath wooden and painted ceilings, Turkish and international dishes are served on colorful ceramic plates in a quaint and charming atmosphere.
More Info
Open In Google Maps
No:3 Hacı Nuri Bey Cad, Nevşehir, 50500, Turkey
+903845115007
View menu
Visit website
Visit Facebook page
Send an Email
Give us feedback

Cafe, Mediterranean, Turkish, Vegetarian, $$$
Be it day or night, the three outdoor terraces at Ziggy Cafe offer stunning views of Ürgüp. Inside, the old stone house hosting the cafe offers a homely atmosphere, with its warms lights, and cream and purple tones. There’s an innovative menu providing a contemporary twist to the traditional dishes of Cappadocia’s cuisine. Pasta dishes and salads are served alongside a variety of meze, pastirma and borek. All are complemented by a signature dessert (a miniature borek with cinnamon and powdered sugar) and Turkish coffee served in Ziggy’s own designed cups.
Looks like it's closed Hours or services may be impacted due to Covid-19
More Info
Open In Google Maps
Ahmet Refik Caddesi, Nevşehir, 50400, Turkey
+903843417107
View menu
Visit website
Visit Facebook page
Send an Email
Give us feedback

A distinctive pink sign invites guests into MUTI RESTAURANT. Ottoman and Turkish cuisine, regional and international dishes blend into a variety of elaborate plates on Muti’s menu. Diners can choose from a sensational range of starters, pick a salad, pasta, or meat dish, or try a Turkish or Armenian special such as karnıyarık (stuffed eggplant with chopped meat and tomato sauce) or topik (chickpea paste with an onion, currants, cumin, and tahini filling).

Hotel Restaurant, Turkish, Vegetarian, Vegan, $$$
Authentic Greek Food | ©Pixabay
Walking around Mustafapaşa is like taking a stroll in the past. Still known to many by its previous name of Sinasos, this ancient town was home to a large Greek community under the Ottoman Empire. The remainders of it are still visible in the architecture of its rock-cut churches and indeed in that of the Old Greek House restaurant. Built in 1887, the mansion was acquired by the Öztürk family and turned into a hotel and restaurant. Emine Öztürk prepares all the dishes served at the Old Greek House, from köfte, to cacik, güveç and hünkar beğendi.
More Info
Open In Google Maps
No:16 Şahin Caddesi, Nevşehir, 50420, Turkey
+903843535306
View menu
Visit website
Visit Facebook page
Send an Email
Give us feedback

Set against the backdrop of the rural hamlet of Ayvali, with its whitewashed houses and apricot trees, Aravan is imbued with local tradition. The food at Aravan is caringly prepared by Mrs Yazgans with products grown in the restaurants’ own garden. Guests are welcome to visit the garden and pick ingredients themselves which will then be used in their very traditional meal. The cooking uses a tandir, an earthen cooking pit. The home-style recipes include dishes like bulgur, kuru fasulye, and guveç, to be savored either on the terrace, or at a round low table while sitting on a bed of Oriental carpets.