For many centuries Turkish hamams have played an important part within Ottoman and Turkish culture. The architectural style of these baths has not changed for thousands of years and many were built during the 15th and 16th centuries. Widely considered architectural works of art, we look at ten hamams open to the public, some of which have been recently restored. 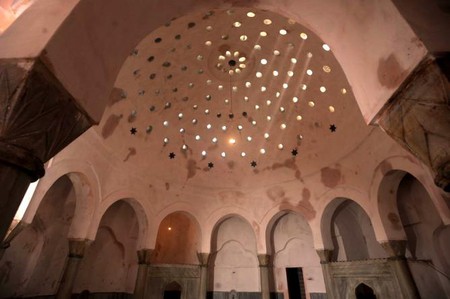 These historic Turkish hamams are of great importance in terms of art and architecture, some holding the same architectural features as the local mosques. Many have inscriptions on the walls containing the date of construction and who built it. There are two architectural period styles: the Ottoman and Baroque. Some differing characteristics include the Ottoman baths which have a portico at the front side, inspired by the Seljuk baths. The most beautiful examples of decorative stone masonry can be found on the doors of some and most hamams found today date back to the Baroque period. 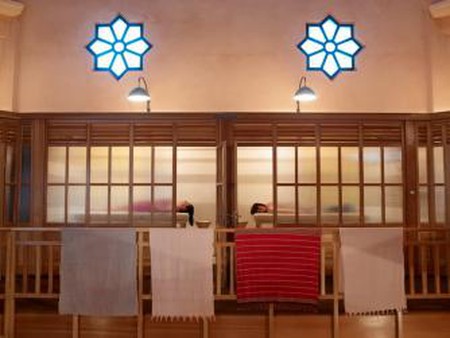 Situated next to the Cemberlitas Column, near the Grand Bazaar, the Cemberlitas Hamam was established in 1584. It was built by architect Mimar Sinan (chief Ottoman architect) with the wish of Nurbanu Sultan, mother of Selim II, to provide a source of revenue for the Valide-i Atik Mosque in Uskudar. The dressing room areas are roofed with large domes and the baths have 38 washing basins. The large dome covering the hot section (harare) is supported by high arches on top of columns with baklava-shaped heads. Marble slab walls topped by tulip shapes separate the cubicles from the main area. These dividers have inscriptions carved into each side. This building dates to Sinan’s last period, known to be his most skillful. For this reason the baths attract Turkish and foreign researchers alike, as well as thousands of bathers. 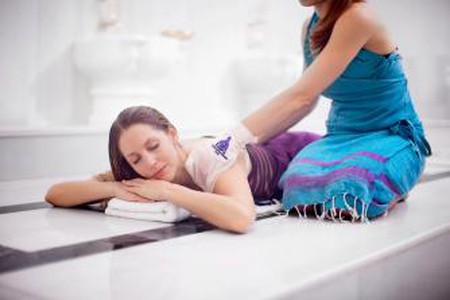 The Haseki Hurrem Sultan Hamam is another creation by the architect Sinan at the request of Hurrem Sultan (Roxelana), the wife of Sultan Suleiman the Magnificent. The hamam was operational until 1910 when it was closed for many years, then restored around 1957 and used as a carpet bazaar until 2007. It was re-opened by the Istanbul authorities as a modern Turkish bath in 2011, now being operated by the Haseki Tourism Group. The baths have separate sections for men and women, and was constructed on the same axis, as mirror images of each other. The cold room dome is an impressive 26 meters high. The Haseki Hurrem Sultan Hamam is located in Sultanahmet Square between the Blue Mosque and Hagia Sophia. 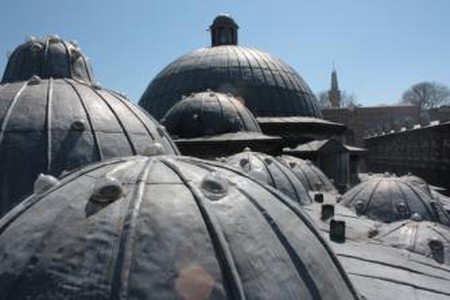 Built in 1557 by architect Sinan, the Süleymaniye Hamam is over 450 years old and is part of the Süleymaniye Mosque complex. Its interior features dramatic archways and domes, and is decorated with elaborate marble inlay. The bath has a cold section (sogukluk) which is also used for dressing, and a lukewarm section to adapt your body temperature before passing to the hot baths (sicaklik). It is known to be one of the few hamams in Istanbul where men and women bathe together. 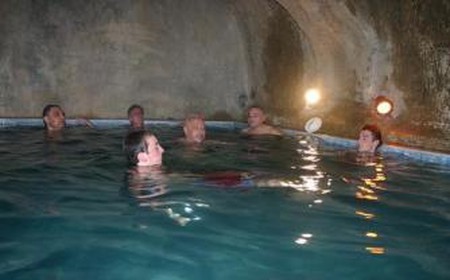 One of the oldest in Istanbul, this hamam was built in 1475 by architect Mimar Hayrettin and is one of the most architecturally and historically important Ottoman buildings in Istanbul, just a few meters away from the Grand Bazaar. The Gedikpasa Hamami houses a ceiling above its bath covered with several small and large domes made in Horasan. Its bath is a double tub allowing men and women to bathe in separate sections. 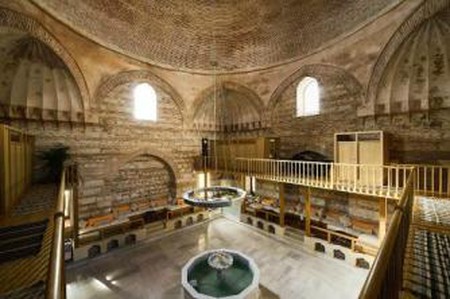 Of Italian origin, Kilic Ali Pasha commissioned architect Sinan to build the Kilic Ali Pasa Hamam in 1580 to serve the levends (marine forces in the Ottoman navy). The large central dome above the relaxation area is an impressive 14 meters wide and 17 meters high, making it one of the largest single domes built by Sinan. During the Republic period the building deteriorated and was left in bad condition. Restorations took roughly 7 years to complete and has brought the hamam back to its original glory, re-opening to the public in 2012. Kilic Ali Pasa Hamam is located in the Tophane neighborhood in Istanbul’s harbor district. 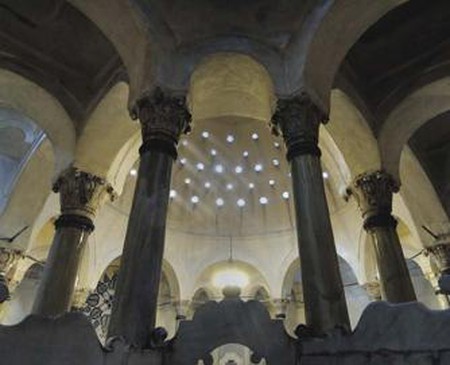 The Cagaloglu Hamam is one of the later hamams built in 1741 by an unknown architect (it is believed to have been built by Suleyman Aga and Abdullah Aga) by the order of Sultan Mahmut I to provide revenue for the library of Sultan Mahmut and the Aya Sofya Mosque. This was the last of the Ottoman hamams to be built in the city before their construction was forbidden by Sultan Mustafa III in 176 because of the increasing needs for water and wood in Istanbul. It is located in the Cagaloglu neighborhood near the Underground Cistern. 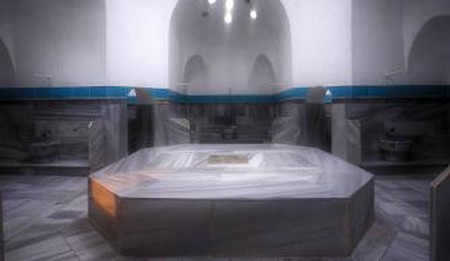 The historical Mihrimah Sultan, located in Edirnekapi, is a part of the Mihrimah Sultan Mosque and was built between 1562 and 1565 in the form of a double Turkish bath. The Mihrimah Sultan hamam has a square shape camekan (court) area which is held on top of twelve columns. The hot bath room was built under a large dome with four halvets (very hot bathing cubicles within the bath) and four eyvans, and includes a göbektaşi (octagonal marble slab). Sultan Suleiman the Magnificent commissioned architect Sinan to build the Mosque complex for his daughter Mihrimah Sultan, one of the most powerful Ottoman princesses. 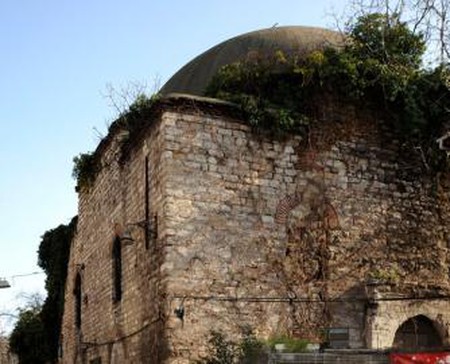 The Çardaklı Bath is located in the Kadirga neighborhood, near the Kucuk Aya Sofya Mosque. It was built in 1503 by Kapı Ağası Hüseyin Bey and was first restored by architect Omar Bin Veli, and later by Mehmet Bin Uveys. A Byzantine inscription found at the entrance suggests that it was most likely converted into a Turkish bath from an old Byzantine building. It houses a camekan surrounded by small individual changing rooms covered by a dome. The main hot room (harare) is roofed by a larger dome,where its visitors sit in the steam for as long as desired. halvets are placed on both the left and right sides of the harare. There is also a göbek taşı and three sofas which are in perfect harmony with the tradition of the classic Ottoman style. 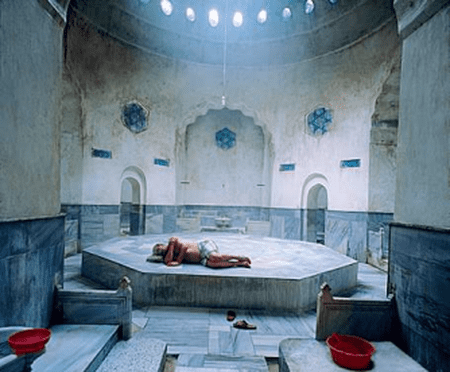 The double-bath styled Cinili Hamam is one of the most distinguished hamams located on Itfaiye Street in Istanbul’s Fatih district. It was built by Mimar Sinan in 1546 for Barbaros Hayrettin Pasha, one of the legendary admirals in the Ottoman Naval Army. It took its present name from the İznik tiles covering its walls of which, unfortunately, only a small number still remain. There is a pool with a fountain in the middle of the camekan, which is thought to have been a gift by the Shar of Iran. On the way to its harare visitors walk through a passageway passing an impressive bathroom covered by five domes. Another of its many unique features includes two verses each written in Persian and found on the doors of the halvet. 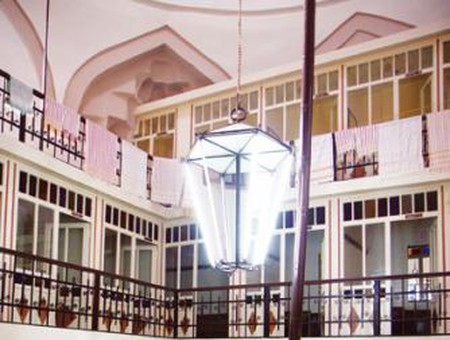 The Tarihi Kadirga Hamam has been a Turkish bath since 1505, built for the Egyptian Governor Yahya Pasha bin Abdulhay, a vizier of Sultan Bayezid II period. The bath caters for both men and women and is a smaller, more authentic hamam compared to the others featured. Built out of rubble stones and bricks, it has been repaired twice in 1948 and 1952.