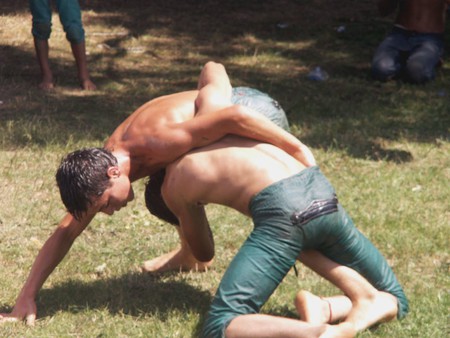 Turkish oil wrestling is an ancient sport with roots in Sumer and Babylon civilizations as well as the Greco-Roman traditions. In Turkey, almost every village has their own oil wrestling events, but every year Kırkpınar Oil Wrestling Festival, the world’s oldest sporting competition, comes together to determine the ultimate başpehlivan (champion).

Part of UNESCO’s Intangible Heritage list, the Kırkpınar Oil Wrestling Festival was established in 1346 and has been held annually without interruption. Every July, hundreds of young newcomers as well as the older more experienced athletes arrive in Edirne to take part of the large festival, which is visited by enthusiasts from all over the country. Held within the Güreşçiler Tekkesi (wrestler’s lodge), a stadium in Edirne’s historic Sarayiçi neighborhood, the statues of Kurtdereli, Kel Aliço, and Koca Yusuf (the three great oil wrestling champions) greet every visitor. 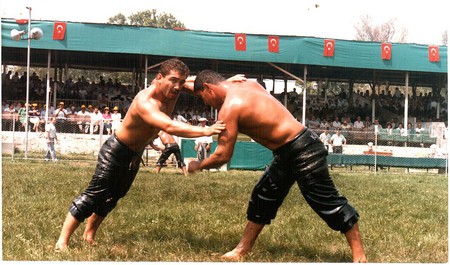 Inside, the stadium seats look over a large patch of grass where wrestlers dressed in the traditional kisbet (hand stitched leather trousers) are doused in oil. The festival, which lasts three days, begins with the youngest candidates who wrestle to get to the next level, and ends with the older generation of professional wrestlers who battle it out for the big win. Before every match, a prayer is recited followed by the traditional drum and zurna music while the sound of fathers urging their sons onward is a constant reminder of how integral the sport is in the lives of many families.

During the Ottoman Empire, the tournament was held in the village of Kırkpınar (hence the name) but was moved to Edirne’s Sarayiçi neighborhood when the village became part of Greece (modern day Samona). What hasn’t changed are the rituals of the game as well as the fact that wrestlers from all over Turkey train for the tournament all year round. Depending on their experience, wrestlers are separated into 10 categories, with the highest category (baş güreş) held during the tournament’s last day. Two wrestlers at the very end go against each other for the Gold Belt. These final matches can sometimes last hours and it is not until the opponent’s navel faces the sky that a winner can be declared. 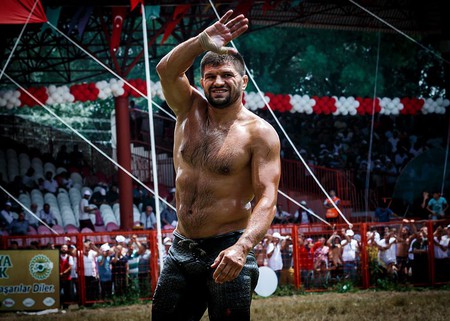 Şaban Yılmaz, a wrestler | © Furkan898/Wikimedia Commons
Give us feedback