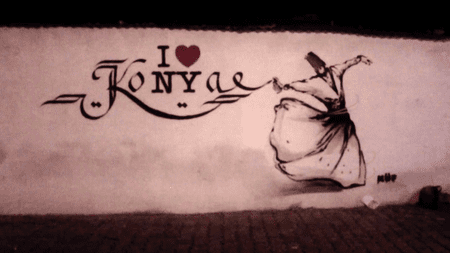 'I Love Konya' Project/Screenshot from Vimeo

Unlike Istanbul, where graffiti and street art are a very common sight, especially in Beyoğlu, Ankara only has one street art collective that was able to make a lasting mark. The Küf Project appeared in 2010 by manipulating a street sign and went on to leave their installations and stencil art all over Ankara as well as the rest of Turkey.

We won’t be able to reveal the identities behind Küf, but what we can reveal is that they are a group of very talented artists with strong opinions and a deep sense of humor. The Küf Project began in 2010 when the street artists manipulated a traffic sign that meant to direct traffic to the Gaziosmanpaşa neighborhood. The sign suddenly read “Tosun Paşa,” a popular character from a 1976 Turkish comedy where Şaban (played by Kemal Sunal) is a butler who pretends to be a governor general in order to settle a fight between two noble families. Always moving around before the break of dawn, no one ever saw Tosun Paşa go up; it just appeared when the people of Ankara began to go about their day. 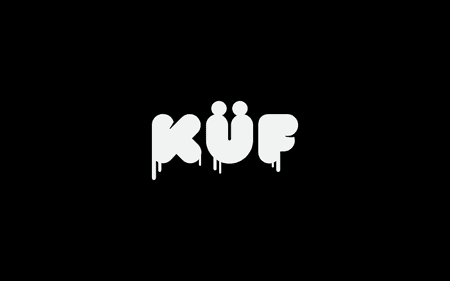 Dedicated to breaking the monotony of Ankara’s daily life with artistic expression, Küf’s dedication to adding color to the grayness resulted in striking and often humorous street art projects that were also successful in raising a certain kind of awareness. But the process of manipulating public space is, of course, not easy (and most importantly, illegal!), and after four months of preparing Tosun Paşa, the group’s first attempt is unsuccessful because of a short ladder. After making a run for it, the rush inspires them to try again—and this time with photos and videos that begin to spread like wildfire over the internet. And when the local news channel reports on the sign, the project is born and begins to grow.

Over time, the projects become bigger and more dangerous, and it is then that one of the group’s most memorable installations comes to life: Büyükşehir Küçük. At the break of dawn and dressed as street cleaners, the street artists arrive at a newly built underpass and hang a urinal over the logo of Ankara’s municipality with a sign that indicates the usage price as 1TL. The city responds by closing the underpass and sending a bomb squad who takes down the sign and blows up the urinal with a fuse for security measures. And it is at this point that the collective becomes a legend among Ankara’s locals.

After the urinal ordeal, the group returns to their roots and begins leaving their mark through stencil street art. Whether it’s the mayor of Ankara dressed as Mickey Mouse or an homage to Konya with a mural depicting a whirling dervish, Küf’s projects not only make their viewers smile but also imbues them with a message that makes them think a little outside of their daily realms.