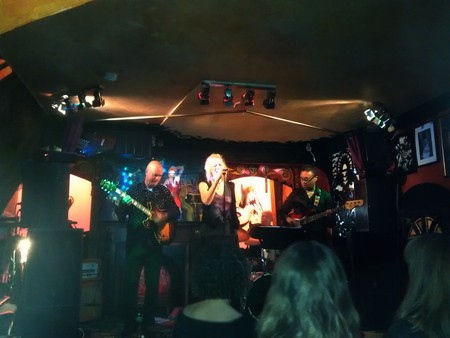 With a nightlife scene that mainly revolves around bars with a stage, where local bands get to show off their talent, it’s no surprise that Ankara has a big music scene. From Turkish folk music to rock and jazz, we choose some of our favorite acts you’ll love to see live.

An artist who has released several albums and gives concerts around the country, it’s always a treat to see Manuş Baba on a smaller stage in Ankara. Having performed with many cover bands, Manuş began experimenting with pop, rock, and experimental genres in order to come up with his unique sound, that has won him a loyal following.

A band that has a loyal following and their own unique sound (having resisted the temptation to sell out to the mainstream), Bağzıları is one of the best local rock bands from Ankara. With their guitar riffs and poignant lyrics, you’ll love seeing them live on stage, especially when the guitar solo takes off.

With a name that translates to ‘neighborhood quartet’, this unique band plays classic songs typical of the Aegean coast, including Greek songs from Istanbul’s old neighborhoods. The sound of the accordion and the vocalist’s beautiful voice really set a summer-by-the-seaside mood.

A Zaza-Kurdish singer and songwriter who performs mainly in Turkish, Servet Kocakaya’s sound is somber and full of emotion, with words inspired by the rise and fall of life’s events. With five studio albums to his name, Kocakaya has already made his mark in Turkey’s music industry and is a great live act to see in an intimate atmosphere.

A definite must see for all jazz lovers, Ahmet Elmas is one of Ankara’s most talented tenor saxophone players having performed at many jazz events around the country. Alongside his quintet, you’ll see some of the best jazz that Ankara has to offer, live on the stage.

One of the more eclectic Ankara bands in terms of their sound, the Kolan Müzik Topluluğu can often be seen on the streets performing their folk music inspired ensemble. An amalgamation of the traditional kanun (a plucked zither), Turkish frame drum, and a very talented vocalist, you must see Kolan live either on stage or on the streets of Ankara.

Another great Ankara band influenced by Turkish folk music and instruments, Boyalı Kuş (which means ‘painted bird’) are truly as free as a bird, changing their sound on a whim through the use of different instruments and vocals.

One of Ankara’s best blues groups, Mojo Town has a rare sound inspired by America’s great blues legends. Definitely a different sound for the Ankara stage, you’ll hear a lot of blues classics, as well as tributes to the 60s era including homages to The Doors.