All You Need To Know About Istanbul Modest Fashion Week 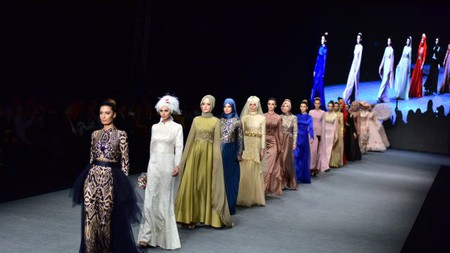 Fashion’s more demure side was showcased for the first time during Istanbul Modest Fashion Week between May 13-14 in city’s old Haydarpaşa train station. We took a look at this spotlight event for conservative wear around the world.

Sponsored by Modania, an online retailer of Muslim fashion, the work of seventy designers was showcased under the spotlights in Istanbul’s beautiful old railway station. With the aim of creating mainstream fashion out of modest wear, the event also intended to encourage Islamic communities to produce clothing for women. With Muslim women wanting to follow the rules but also be chic in doing so, modest fashion has become quite the growing market within the fashion industry. Serving as a natural bridge between the European and Asian markets, its booming textile industry, and with an estimated two thirds of all its women wearing headscarves, Turkey was the perfect host for the event.

Even though modest fashion is still a budding industry, the Global Islamic Economy states that spending on Muslim clothing is expected to grow to $327bn by 2020. During the event, models wore everything from earthy tunics to floral dresses and shimmering gowns, all kept demure with shape-concealing cuts. Every look was also accompanied by decorative turbans and headscarves, as well as chignons for the unveiled.

Apart from the runways shows, the event also held designer stalls with products available for purchase and workshops and conferences, where participants had the opportunity to meet globally renowned figures from the modest fashion world while investors had the chance to connect with new markets. The event is also seen as monumental in bringing the people of modest fashion together in order to allow the market to grow through collaboration and influence.

On the runway, intricate and floor length garments traversed the world with names such as Aidijuma from Malaysia, Anggia Handmade from Indonesia, Annah Hariri from the UAE, Aywa Londra from the UK, Gulshaan from France, Mumine Activewear from Belgium, Zamzam Zalila from Germany, Amalina Aman from Australia and Minel Aşk from Turkey, just to name a few!