All You Need to Know About Hadrian’s Gate, the Famous Arch in Antalya 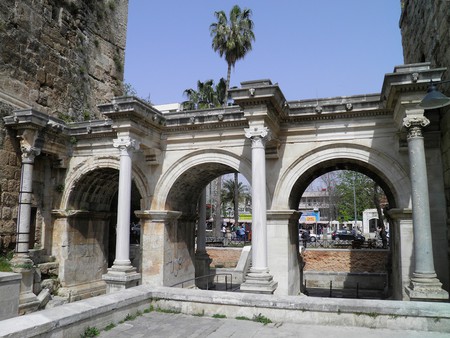 Located right on Atatürk Boulevard in Antalya’s city center, Hadrian’s Gate is a stunning historic ruin that dates back to 130 AD. Built to commemorate Emperor Hadrian’s visit, it managed to survive the wear and tear of time and humanity.

When you’re wandering around Antalya, it’s impossible not to walk past one of the city’s most important historic sights: Hadrian’s Gate. The gate, which dates all the way back to 130 AD, was originally built to commemorate Roman Emperor Hadrian’s visit to Attaleia (as Antalya was known back then). It’s no surprise that this historical edifice also happens to be one of the main entrance’s to Kaleiçi, the city’s beautiful historic quarter. Known as Hadriyanüs Kapısı in Turkish, the gate was part of the city’s outer walls and became an important gateway after its completion. As for the gate’s architectural qualities, the two towers standing on either side are from different time periods. While the southern tower, built independently from the gate, is from the Roman era, the northern tower is associated with the Seljuk sultan Alaeddin Keykubat I, who reigned in the first half of the 13th century AD, with a befitting inscription in Arabic script. You’ll be able to notice that the southern tower, which is also known as the Tower of Julia Sancta, is quite distinct from the other and is marked by a stone inscription, which substantiates its ancient construction date. 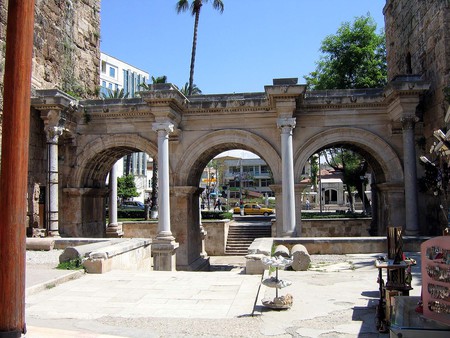 A typical Roman triumphal arc, Hadrian’s Gate has three same-sized archways and has an overall height of around eight meters (26.2 feet) from the historic pavement to the very top of the gate’s entablature. In the front and back of the gate, you’ll be able to see beautifully adorned façades that are made from four columns each and composed of white marble, except the column shafts, which are granite. The entablature on the very top of the gate is also quite noteworthy and extends to both sides with a height of 1.28 meters (4.2 feet), including a frieze decorated with floral motifs and an ornate cornice that shows lion heads among other visuals. Last but certainly not least, the barrel vaults located on the archways are also quite decorative with caissons that each have their own floral motifs and rosettes. Discovered in 1817 by Irish-British hydrographer Rear Admiral Sir Francis Beaufort, the gate became part of his published diary that recounted his travels along the southern coast of Asia Minor. In this particular description, Beaufort describes the gate as having a higher level, but it must have been destroyed in the 19th century because no other accounts after that time period note this extension. 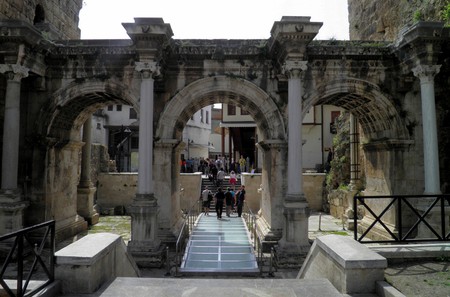 It wasn’t until the 1950s that the exposure and renovation of Hadrian’s Gate took place, quite astounding given what a beautiful monument it truly is. Nowadays, it’s among the most important sights in Antalya and leads to the historic houses, restaurants, and delightful shops in the city’s old town. After Hadrian’s Gate, it’s about a 10-minute walk until you reach a beautiful view of the city and the sea where having a cold lemonade at one of the cafés in the shade is a definite experience while in Antalya in the summer. 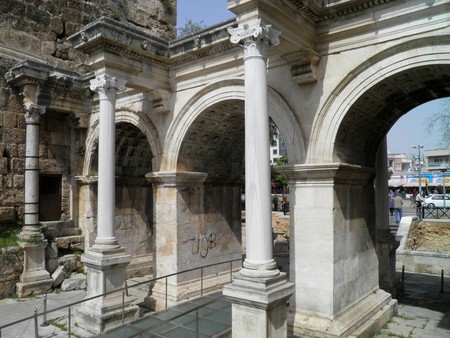