A History Of Fashion In The Ottoman Empire

Given the ardency of cultural development and growth during the Ottoman Empire’s heyday, it’s no surprise that certain elements of its history continue to inspire Turkish artists, chefs, and designers to this day. We take a look at the history of Ottoman clothing – from the sultan’s garments to the clothing worn by women of the court – for a small glimpse of those imperious days.

During the 16th century, the Ottoman Empire reached a peak of economic and political power. As such, the textile industry also witnessed a boom, with weaving techniques and the quality of fabrics at their pinnacle. Of course, the sultans would have nothing less than luxurious kaftans composed of the most expensive fabrics, with gold- or silver-plated threads. In order to supply the substantial demand, special workshops designed court apparel and furnishings, sometimes even placing orders to other workshops in Istanbul and Bursa in order to meet the high demand.

The stunning sultan kaftans (worn with şalvar, loose trousers) were made of fabrics such as brocade, velvet, satin and silk lampas, taffeta, mohair, and cashmere. International influence also played a major role, with various cloths ordered from renowned Italian weaving centers in Venice, Genoa, and Florence, as well as the diplomatic gifts from textile-rich countries such as Iran, India and China. One of most famous designs from this era was the Chintamani motif, which was composed of a wavy line with three circles. Other motifs such as flowers, branches with leaves, the sun, moon, stars, and the endless knot were also common. The sultan’s headgear was also a very important element of Ottoman fashion, beginning with the horasani (a woolen conical hat) and evolving to the mücevveze (a cylindrical hat wrapped in fine muslin). 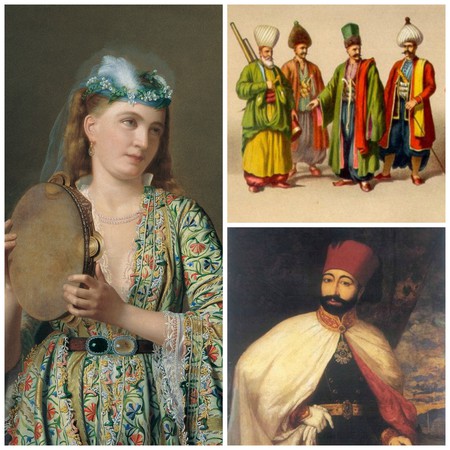 As for the women belonging to the sultan’s family, a kaşbastı (a diadem embellished with a stone at the center) was worn on the head to indicate their rank. In the 17th century the head ornaments of women evolved, becoming increasingly ostentatious, with carefully selected set jewels. In the 16th century, a fez with a thin white scarf which covered the whole head and shoulders was also used. Women in the court wore an inner robe called an iç entari with an elaborate belt called the cevberi. These belts also became quite decorative, with attached jeweled daggers or embroidered key purses. As an outer layer, women also wore kaftans, which were lined with fur in the winter months, while all garments were made from the era’s prevalent textiles, such as brocade, silk and velvet.

During the reign of Ahmed III (1703-1730), significant changes began to occur in clothing as Western influence took its hold. As women began to enter the recreational public sphere, their aesthetic also changed with the ferace (a plain outdoors overcoat) becoming more colorful and embellished with gilded trimmings and ribbons. Headgear with crests and covered by a thin white veil were worn by women, who also carried silk parasols with jeweled hand grips. A movement toward Westernization in dress during the reign of Sultan Mahmud II in the 17th century caused the Westernization of military apparel, as Ottoman sultans began to dress like Western commanders in darkly colored suits with embroidered borders, plus a fez. By the 1850s, women’s interest in European goods increased and orders were placed resulting in an import of fashion that changed the Ottoman style drastically.