A Crash Course In Turkish Cuisine 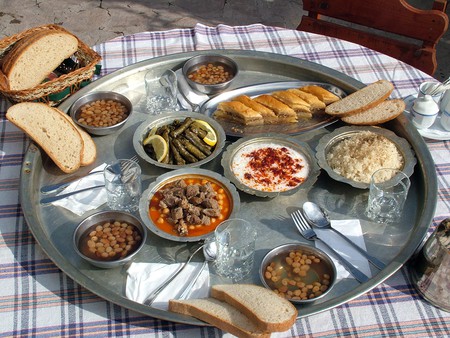 Turkish cuisine is a rich and multitudinous gastronomic culture that has been affected by the country’s history as well as its geography. The abundance of diversity in terms of both ingredients and differences in regional cultures, as well as the legacy of the Ottoman kitchen, have all played a large role in its development. We take a look at some of the most important facts that surround the Turkish kitchen for a quick crash course in its prolific identity.

According to historical documents, the basic foundation of Turkish cuisine was established during the Nomadic Period and the first Turkish settlements in Asia. It was during this time that the culinary use of meat, dairy, vegetables, and grains were developed, continuing to represent the core of the Turkish kitchen today. Dishes such as mantı – dumpling – and buğra – the ancestor of börek, a pastry with various fillings – were already being prepared and eaten during this time. Stuffing vegetables – known as dolma today – was also common, as well as the skewering of meat for grilling, which later became the various types of kebap. For pastoral Turks, the production of cheeses and yogurt were also staple foods, as all these practices were introduced to Anatolia in the 11th century. With migration, rice, fruits, vegetables, and fish native to the region were also introduced to the cuisine.

With a landscape that encompasses so many different variations of scenery, temperature, altitude, humidity, vegetation, and weather, Anatolia’s diversity is also a leading factor in the similarly diverse nature of its cuisine. Every region has its own specialty due to the effects of its landscape and its bounty; while the eastern region is known for its livestock farming and the use of herbs from the highlands, the fertile lands of the west promote the consumption of seafood and the production of aromatic olive oil. 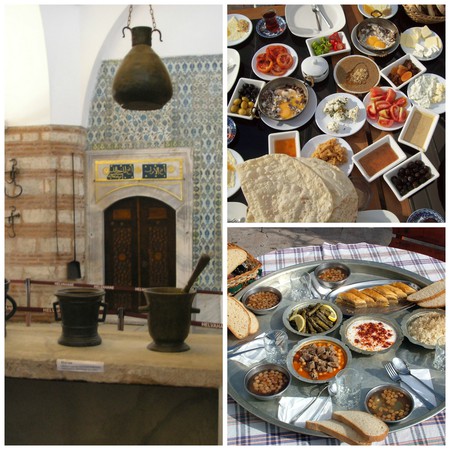 One of the most important phases of development for Turkish cuisine was the Imperial Kitchen of the Ottoman Empire. It was here that hundreds of cooks specialized in different types of dishes that were perfected in order to please royalty. During this time, the foundation was established for the Turkish kitchen that we know today. Whilst visiting Topkapı Palace, you’ll quickly realize how important food really was because of the kitchens that were housed in several buildings with around 1,300 kitchen staff. Expert cooks who specialized in soups, pilafs, kebaps, vegetables, fish, breads, pastries, candy, helva, syrup, jams, and beverages fed around 10,000 people on a daily basis. As such, chefs who dedicated their lives to the perfection of their dishes created a culinary foundation that was also carried into other provinces from the Balkans to Southern Russia and Northern Africa. Not to mention the Spice Road, one of the most important factors in the development of Turkey’s culinary history, which imported and exported the best ingredients around the world.

In order to make things a bit simpler, Turkish cuisine has been organized into seven main categories: grains (bread to börek), grilled meats, vegetables, meze, fish and other seafood, dessert, and beverages. As such each category branches out into endless flavor combinations and dishes affected by both history and the cultures of various regions. When you visit Istanbul today, restaurants representing different regions are very common and all prepare different kinds of dishes. A modern approach to the Turkish kitchen, also known as the ‘New Anatolian Kitchen,’ has also fostered professional chefs who experiment with the traditions and ingredients of Anatolia for a very upscale and experimental look at Turkish cuisine.