A Brief History Of The Whirling Dervish 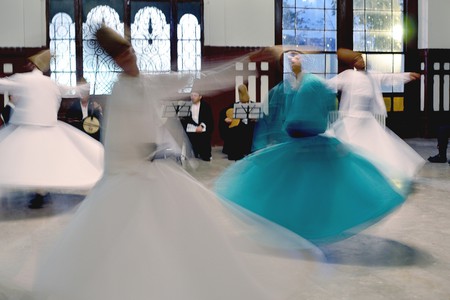 Everyone is familiar with the image of the whirling dervish, clad completely in white and spinning expertly as if in a trance. However, the dervish is much more than a visual spectacle, dating back over 700 years as part of Sufism and the Mevlevi Order. We take a look at the history of the dervish, their beliefs, and the significance of the whirling ritual.

Of the numerous orders of Islam, Sufism is defined as the inner and mystical dimension. The Mevlevi Order was formed in 1312 in the Turkish city of Konya (formerly the capital of the Anatolian Seljuk Sultanate) by the followers of the 13th century Persian poet, Islamic theologian, and Sufi mystic Jalāl ad-Dīn Muhammad Rūmī (or Mevlânâ). Organized by Mevlânâ’s son, Sultan Walad, the order in Konya soon began to expand into other towns with appointed leaders, and in its heyday there were 114 tekke (monasteries) established throughout the Ottoman Empire, including ones in Belgrade, Athens, Cairo, Mecca, Baghdad, Damascus, and Tabriz.

With the fall of the Ottoman Empire after WWI, the Sufi organizations were declared illegal, and the tekkes were either closed down, adapted into mosques, or turned into museums. Two of the most important remaining Mevlevihane are the ones in Konya (where Mevlânâ is buried) and the Galata Mevlevihanesi in Istanbul. By 1953 public performances of the Mevlevi Sema, or the Whirling Prayer Ceremony, were permitted by the Turkish government, and soon large crowds came from all over the world to watch displays organized by the Ministry of Culture and Tourism. 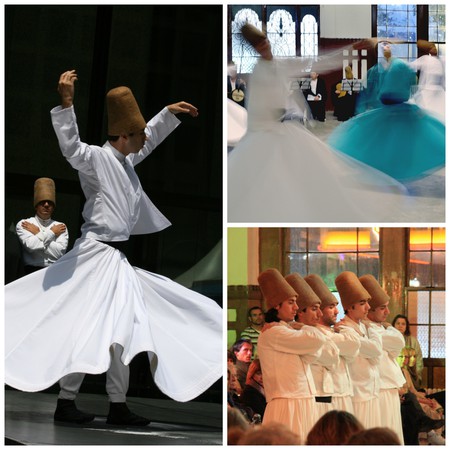 Originally, the Semahane Ceremony was a weekly remembrance of God, a ritual practiced by each Mevlevi tekke community where everyone was present, including Mevlevi musicians, women, and non-resident dervishes who chanted the Mevlevi ‘zikr,’ or prayer, silently in their hearts. As for the symbolism of the Sema ritual itself, the semazen camel’s hair hat (called a sikke) represents a tombstone of the ego, while the white skirt (called a tenure) is the shroud of the ego. When the dervish takes off his black coak, he is meant to be spiritually reborn to the truth. At the beginning of the ceremony the dervish holds his arms crosswise to represent the number one, testifying God’s unity.

While whirling, the dervish’s arms are open with his right hand directed to the sky, representing his readiness to receive God’s beneficence. The dervish’s left hand is turning toward the earth, representing his willingness to convey God’s spiritual gift to those witnessing the Sema. It is also believed that while revolving from right to left around his own heart, the dervish embraces all humanity with love, since Sufis believe that the human being was created with love in order to love. A quote by Rumi states that, ‘All loves are a bridge to Divine love. Yet, those who have not had a taste of it do not know.’