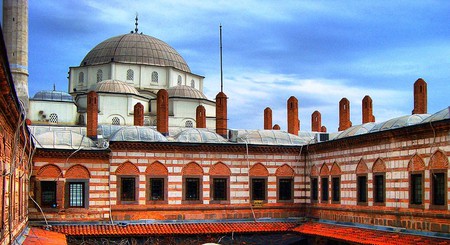 Located inside the colorful Kemeraltı Market, the Kızlarağası Hanı is a beautiful historic caravanserai that dates from the 18th century. A favorite among Izmir locals and tourists, visiting the Han is like taking a journey back in time.

The Kızlarağası Han is Izmir’s largest and most impressive caravanserai (traveler’s roadside inn, or han in Turkish), built in the beautiful Ottoman architectural style. Built in 1744 and located next to the Hisar Cami (Izmir’s largest mosque), the Han used to be located by the seaside, but is now about 200 meters from the shore.

Like most historic structures in Turkey, the Han sustained damage in the early 18th century from natural disasters like earthquakes and fires, but was renovated every time. Its design, which includes a main courtyard surrounded by arcades, is common for the grand Ottoman-style hans. With an overall space of 4000 square meters on a rectangular plan, the Han has two floors and a central courtyard of around 600 square meters.

Inside the Han you can find different bedesten (bazaars), including the Cevahir Bedesten, Bakır Bedesten and Çuha Bedesten. There is also an extra floor called the Saçmahane, built in 1745 to accommodate an additional row of shops. 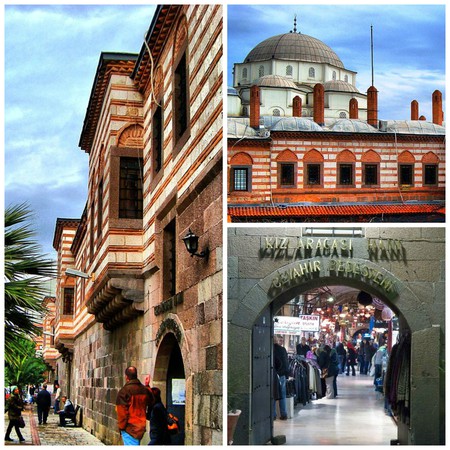 The Bakır Bedesteni (copper bazaar) is the Han’s most well-preserved section. It first housed the city’s best copper workshops and later became the place to purchase silk from Iran. In its heyday, the Han’s ground floor was where caravans would arrive and unload their goods, which were then placed in the storehouses or sold to the shops inside the bazaars. The transportation (camels, mules, donkeys, and horses) would spend the night in the Han, which would close its doors at night. Upstairs, several rooms with furnaces accommodated the traveling salesmen.

Due to the Kızlarağası Caravanserai’s central location by Izmir Harbor, it was a very important trade point. By 1778 the Han reached its peak productivity, and continued to flourish until the last quarter of the 19th century. Advances in transportation and changes in the economy slowly decreased the Han’s importance, until it came to be used merely as a storage facility.

In 1993, a meticulous restoration project brought the Han back to life, turning it into a tourist bazaar selling a multitude of handicrafts, carpets, leather goods, and souvenirs. The historic courtyard features tea and coffee houses, including the famous Şükrü Bey’in Yeri, where Turkish coffee is brewed on coals inside the cup instead of a pot. Visitors and locals like to head to the Han to take in the historic atmosphere that’s far removed from Izmir’s modern urbanity.