8 Festivals Worth Traveling to Turkey for 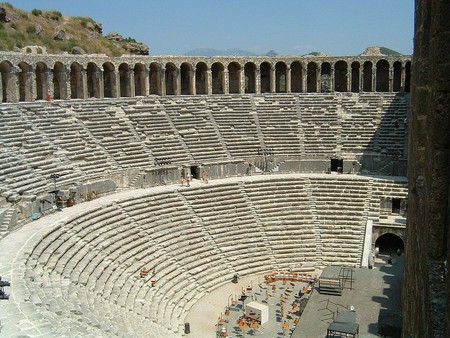 From opera and ballet to film, theater, and rock music, Turkey has so many festivals that every interest is quelled with one great event after the other. Check out some of the best festivals taking place annually in Turkey that everyone should visit.

One of the most amazing festivals in Turkey is held annually, in the almost 2,000-year-old Roman Aspendos Theater outside of Antalya. One of the most well-preserved ancient theaters in the world, the Aspendos Festival is an amazing conjunction of past and present with a stage that has featured some of the most renowned international opera and ballet companies from several countries. Some standout performances include Aida by the Ankara State Opera and Ballet, the Magic Flute by the Deutsche Oper Berlin, and the Zurich Ballet.

Another excellent festival with a very unique location, Cappadox has been held annually since 2015, in the middle of the beautiful landscape of Cappadocia. A festival of music, contemporary art, gastronomy, and outdoor events, Cappadox has featured local and international artists such as Mercan Dede, Rhye, İlhan Erşahin, and Acid Pauli to name a few.

IKSV (Istanbul Foundation for Culture and Arts) annually hosts five festivals: Film, Music, Theater, Jazz, and Design, which are all worth a trip to Istanbul.

Held every April, the Film Festival began in 1983 and is Turkey’s biggest film festival featuring a very large showcasing of both Turkish and international films.

The Music Festival began in 1973 and has hosted some of the most prestigious orchestras and ensembles from around the world on the Turkish stage.

One of the youngest festivals, the Theater Festival has been around since 2002 and plays host to theater companies and dance groups from Turkey and abroad.

Held every year since 1994, the Jazz Festival has featured local and international artists of classical and modern jazz, Latin and Nordic jazz, works combining electronic music and jazz, and much more for the Istanbul audience.

Last but not least, the Design Festival, which is held every two years, brings together design ideas from local and international participants under a specific theme.

Turkey’s biggest rock festival is definitely worth a trip to Istanbul. Established in 2003 and sponsored by Coca Cola, Rock n’Coke is a huge festival that is held at the Hezarfen Airfield and has hosted some major musicians from the rock world such as Limp Bizkit, Motörhead, Travis, Moby, Nine Inch Nails, Muse, Franz Ferdinand, Placebo, The Cure, Korn, Iggy Pop, Gogol Bordello, The Prodigy, and Linkin Park.