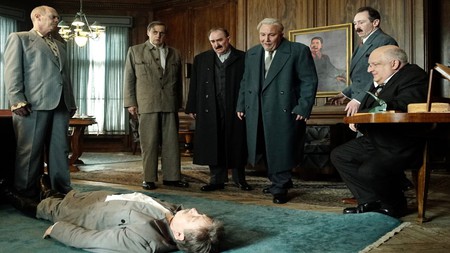 The !f Istanbul Independent Film Festival took place in February and March this year. It wowed cinephiles with a slew of independent films that often don’t get their due in the shadow of major blockbusters. Check out some of the festival’s standout films that you should go and see as soon as they hit an independent cinema near you.

The Death of Stalin

A definite must see if you’re a Steve Buscemi fan, The Death of Stalin takes a thoroughly comic look at the Soviet dictator’s last days and the chaos that ensued after his death. It was directed by Armando İannucci, best known for creating the ridiculously funny HBO series Veep.

Turkey’s first punk film takes a deep and honest look at Istanbul’s underground scene, telling the story of a young punk musician who wants to get out of the city. Based on real events and the autobiographical story of the director, Mu Tunç, the film was inspired by the first punk and hardcore music movement that took Istanbul by storm during the ’90s.

I am Not a Witch

This award-winning film–which premiered at important film festivals such as Cannes, BFI London, and Sundance–tells the story of a young Zambian girl who is accused of being a witch. Directed by Rungano Nyoni, the film closely examines the continuance of superstitions, as well as social and women’s issues, while also managing to keep a sense of humor throughout.

Set during the events that led to Egypt’s 2011 revolution, The Nile Hilton Incident follows the story of Noredin, a police officer who is investigating the murder of a young woman at an upscale hotel. As the case unfolds, it soon becomes clear that there are very important people involved who will do anything to prevent the case from being solved.

A film for those who have been enchanted by the fiction of Haruki Murakami, Dreaming Murakami follows the story of Mette Holm, who begins to translate the writer’s debut novel, Kaze no uta o kike (Hear the Wind Sing). The worlds of fiction and reality blur as Holm is suddenly followed by a two-meter-tall frog who urges her to help in the fight against the gigantic worm.

True horror movie fans are familiar with the iconic shower scene in Alfred Hitchcock’s terrifying film Psycho. However, this documentary takes a closer look at how this particular scene changed the whole game. With commentary from famous names such as Guillermo del Toro, Bret Easton Ellis, Karyn Kusama, and Eli Roth, the infamously bloody scene really gets its due in terms of its significance in film history.

A Prayer Before Dawn

This intense film is based on a true story, and was filmed with real prisoners as both leads and extras. It follows the story of an English boxer who was incarcerated in one of Thailand’s most infamous prisons. The plot unfolds uncomfortably with gruesome details of the nature of prison life, as the protagonist fights in Muay Thai tournaments to win back his freedom.